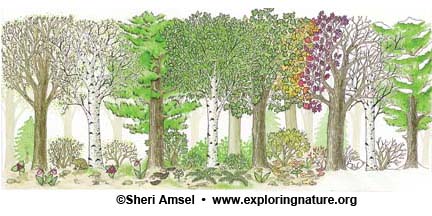 LINKS to content and activities to help fulfill the Next Generation Science Standards shown below.

ESS1.A: The Universe and its Stars

ESS1.B: Earth and the Solar System

ESS1.A: The Universe and its Stars
• The sun is a star that appears larger and brighter than other stars because it is closer. Stars range greatly in their distance from Earth. (5-ESS1-1)

ESS1.B: Earth and the Solar System
•  The orbits of Earth around the sun and of the moon around Earth, together with the rotation of Earth about an axis between its North and South poles, cause observable patterns. These include day and night; daily changes in the length and direction of shadows; and different positions of the sun, moon, and stars at different times of the day, month, and year. (5-ESS1-2)

Engaging in Argument from Evidence
Engaging in argument from evidence in 3–5 builds on K–2 experiences and progresses to critiquing the scientific explanations or solutions proposed by peers by citing relevant evidence about the natural and designed world(s).
•  Support an argument with evidence, data, or a model. (5-ESS1-1)

Patterns
• Similarities and differences in patterns can be used to sort, classify, communicate and analyze simple rates of change for natural phenomena. (5-ESS1-2)

Scale, Proportion, and Quantity
• Natural objects exist from the very small to the immensely large. (5-ESS1-1)


Students who demonstrate understanding can:

5-ESS1-2. Represent data in graphical displays to reveal patterns of daily changes in length and direction of shadows, day and night, and the seasonal appearance of some stars in the night sky. [Clarification Statement: Examples of patterns could include the position and motion of Earth with respect to the sun and selected stars that are visible only in particular months.] [Assessment Boundary: Assessment does not include causes of seasons.]

RI.5.1    Quote accurately from a text when explaining what the text says explicitly and when drawing inferences from the text. (5-ESS1-1)
RI.5.7    Draw on information from multiple print or digital sources, demonstrating the ability to locate an answer to a question quickly or to solve a problem efficiently. (5-ESS1-1)
RI.5.8    Explain how an author uses reasons and evidence to support particular points in a text, identifying which reasons and evidence support which point(s). (5-ESS1-1)
RI.5.9    Integrate information from several texts on the same topic in order to write or speak about the subject knowledgeably. (5-ESS1-1)
W.5.1    Write opinion pieces on topics or texts, supporting a point of view with reasons and information. (5-ESS1-1)
SL.5.5    Include multimedia components (e.g., graphics, sound) and visual displays in presentations when appropriate to enhance the development of main ideas or themes. (5-ESS1-2) 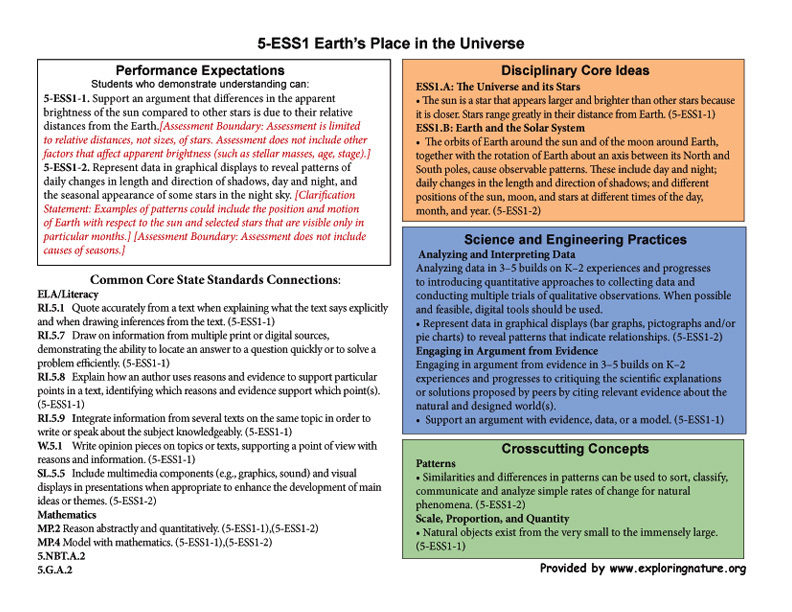 ©2005-2022 Sheri Amsel. All rights reserved.
The material on this site may not be reproduced, distributed, transmitted, cached or otherwise used for anything other than free educational use. It is not to be used for sale or profit of any kind. If you are unsure whether your use of site materials violates the exploringnature.org copyright, contact Sheri Amsel for prior written permission at sheri@exploringnature.org. Thank you for respecting copyright laws.
Site Developed by Eli Madden
Page ID: 1965
IP: 44.210.85.190