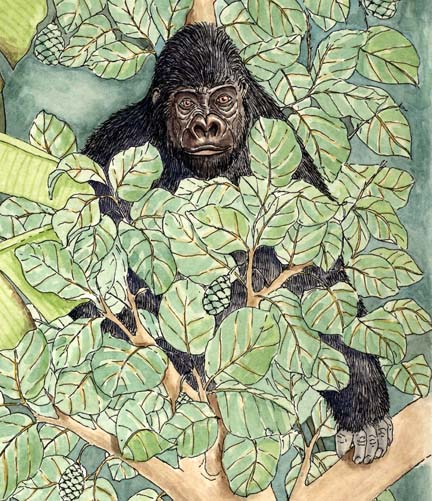 Even though they are "protected", all gorilla species suffer from habitat loss from development and lumber harvesting, poaching and even occasional civil wars that bring soldiers into the forest with weapons that more often than not are used on the gorillas and other wildlife in their path.

There may be fewer than 700 of the rare mountain gorillas left in the wild.

As of 2000, the Western Lowland Gorillas, Eastern Gorillas and Mountain Gorillas (Gorilla beringei) have been listed as Endangered on the CITES IUCN (International Union for Conservation of Nature and Natural Resources) Red List.

The International Gorilla Conservation Programme (IGCP), a joint initiative of the African Wildlife Foundation (AWF), Fauna and Flora International (FFI) and WWF are working to save gorilla populations and habitat.

©2005-2022 Sheri Amsel. All rights reserved.
The material on this site may not be reproduced, distributed, transmitted, cached or otherwise used for anything other than free educational use. It is not to be used for sale or profit of any kind. If you are unsure whether your use of site materials violates the exploringnature.org copyright, contact Sheri Amsel for prior written permission at sheri@exploringnature.org. Thank you for respecting copyright laws.
Site Developed by Eli Madden
Page ID: 650
IP: 44.200.30.73