George Washington Carver (1864 - 1943) experienced many 'firsts' in his lifetime, besides for his many inventions that proved of wide range and importance. He was an Agricultural chemist, which meant that he did a lot of experiments on food crops. He discovered some hugely important things for mankind. He had to overcome some huge barriers to do the important work he did. He was born during the civil war and had to leave home to find a school that would accept a black student. He was the first black student at his college, Simpson College in Indianola, Iowa. He went on to teach college and again was the first black faculty member of the Iowa State College of Agriculture and Mechanics. Then he became Director of Agriculture at Tuskegee Normal and Industrial Institute in 1897.

George Washington Carver's work for the improvement of agriculture was profoundly important. He may be most famous for discovering three hundred uses for peanuts, but he did much more than that. His development of the concept of crop rotation to keep soils from becoming depleted of minerals has been used ever since. He developed dyes during WWI when textile dyes from Europe became unavailable. He came up with uses for soybeans and other food crops, while helping farmers improve farming techniques. 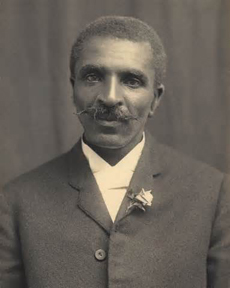 ©2005-2022 Sheri Amsel. All rights reserved.
The material on this site may not be reproduced, distributed, transmitted, cached or otherwise used for anything other than free educational use. It is not to be used for sale or profit of any kind. If you are unsure whether your use of site materials violates the exploringnature.org copyright, contact Sheri Amsel for prior written permission at sheri@exploringnature.org. Thank you for respecting copyright laws.
Site Developed by Eli Madden
Page ID: 1646
IP: 44.200.30.73