Almost all cells in an organism have the same DNA (genetic content), but some genes are expressed (or turned on) and some are not. In a multicellular organism, different cells may express different sets of genes. The genes expressed in cells dictates the proteins (and functional RNA) it contains, which determines which type of functional cell it will be. This allows different cells to have different and unique properties and perform different jobs for the body, e.g. skin cell elasticity versus muscles cell contractability.

For an organism’s body to function properly, it needs certain proteins to be made at certain times. When the protein is no longer needed, it also needs the synthesis of these proteins to stop. This regulation of gene expression for protein synthesis saves energy. It would use a lot of energy to keep those genes turned on all the time. It also saves space as only those areas on the very long strand of DNA with specific genes need to be unwound for translation and protein synthesis.

For example, neurons, the cells of the brain and nervous system, send messages using neurotransmitters, so the genes that code for the production of neurotransmitters are expressed in nerve cells. Compare this to the cells in the pancreas that secrete insulin to regulate glucose levels in the blood (B cells or islets of Langerhans). In the pancreas, the genes that code for the production of insulin are expressed. Nerve cells and pancreas cells both have the same genes on their DNA, but different genes are being expressed and regulated to perform their specific functions.

Which genes are expressed (turned on) by the cell is regulated in different ways. Cells may receive chemical or mechanical signals from outside the cell which affect gene expression. From inside the cell, gene expression can be regulated by the amount of energy that is available (ATP) or the kinds of regulating proteins that are present. The understanding of gene expression regulation is relatively new and is still being studied by research scientists every day. 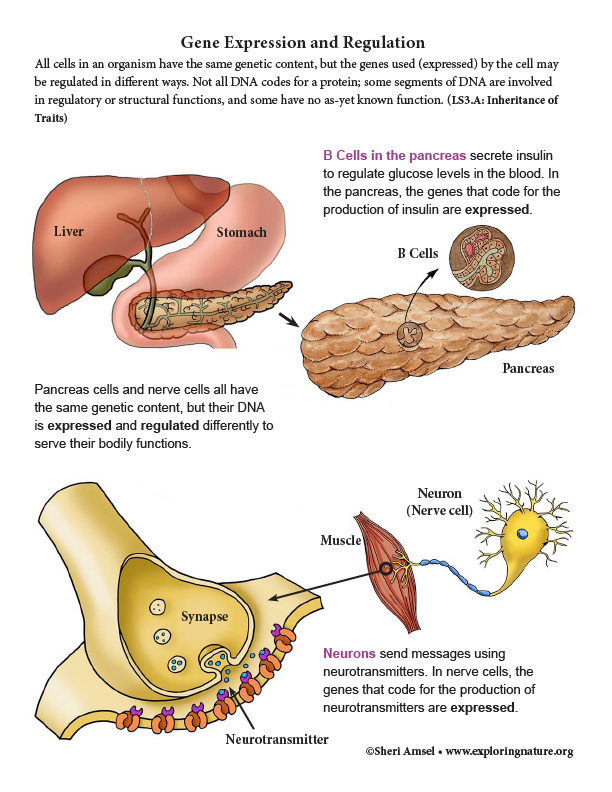 ©2005-2022 Sheri Amsel. All rights reserved.
The material on this site may not be reproduced, distributed, transmitted, cached or otherwise used for anything other than free educational use. It is not to be used for sale or profit of any kind. If you are unsure whether your use of site materials violates the exploringnature.org copyright, contact Sheri Amsel for prior written permission at sheri@exploringnature.org. Thank you for respecting copyright laws.
Site Developed by Eli Madden
Page ID: 6344
IP: 44.200.175.255