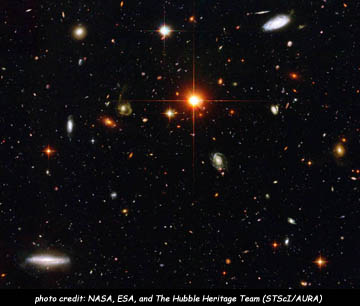 Galaxies are made up of stars and their orbiting planets collected together (clustered) and the surrounding gas and dust. They have billions of stars. They are held together by gravity and move as one unit across the universe. They can be all shapes and sizes like spirals or ellipses. Our galaxy is called the Milky Way.

Looking at galaxies out in the universe we can see all their different shapes and sizes. Some galaxies seem smaller but are really just further away. This picture, taken by the Hubble Telescope, shows galaxies stretching billions of light-years away in space. Because it takes that long for light to reach us, when we look at these distant galaxies we are seeing them and how they looked billions of years ago. And this is just one tiny point out in space!

©2005-2022 Sheri Amsel. All rights reserved.
The material on this site may not be reproduced, distributed, transmitted, cached or otherwise used for anything other than free educational use. It is not to be used for sale or profit of any kind. If you are unsure whether your use of site materials violates the exploringnature.org copyright, contact Sheri Amsel for prior written permission at sheri@exploringnature.org. Thank you for respecting copyright laws.
Site Developed by Eli Madden
Page ID: 1867
IP: 3.235.140.84