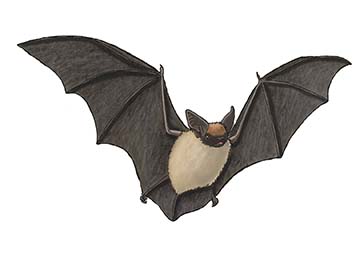 They are found in Western North America from British Columbia, Canada south through Mexico.

They roost in caves (natural and old mining tunnels) and in abandoned buildings.

They are about 3.5 inches long (85 mm). Their fur is light brown on the back and light fur underneath. The membrane between the legs is called the interfemoral membrane or uropatagium and is covered with short hairs - it is fringed, as such. Their ears are relatively large at more than half an inch long (16.5 mm).

They are a migratory species, arriving in the Southern US in mid-May. Females stick to nursery colonies and share duties of watching young and taking turns going out to feed. By October the nursing colonies disperse for winter locations.

Females group into nursery colonies with hundreds of other females in their northern range in mid-May. They are pregnant for about two months (gestation). They give birth to one pup in early summer (late June – early July). They nurse their young for about three weeks. Young begin to fly in a little over two weeks.

They can live for 18 years in the wild. They are endangered in their temperate North American range from white nose syndrome, a fungal infection that wakes them from hibernation, using all their reserve energy before their food source is available. As much as 90% of their population in these areas has been eradicated. 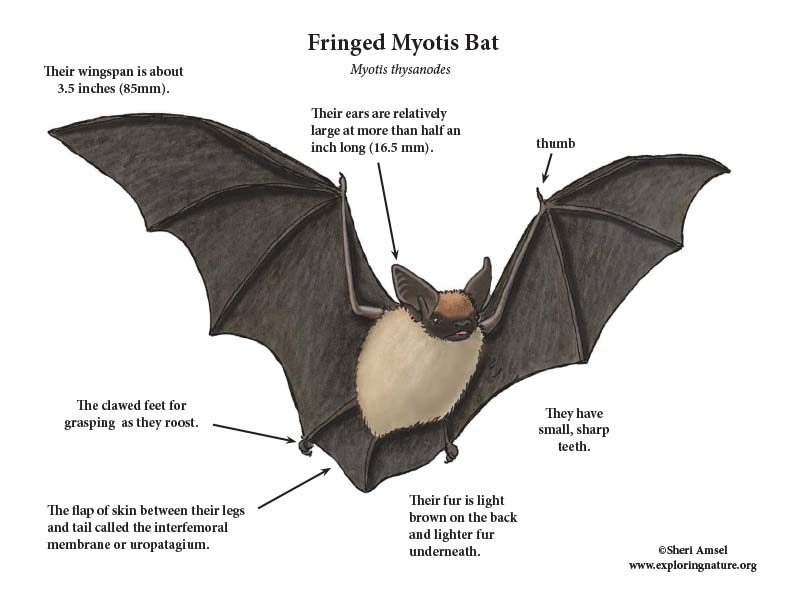 ©2005-2023 Sheri Amsel. All rights reserved.
The material on this site may not be reproduced, distributed, transmitted, cached or otherwise used for anything other than free educational use. It is not to be used for sale or profit of any kind. If you are unsure whether your use of site materials violates the exploringnature.org copyright, contact Sheri Amsel for prior written permission at sheri@exploringnature.org. Thank you for respecting copyright laws.
Site Developed by Eli Madden
Page ID: 6462
IP: 3.236.70.233