Forest succession is the change over time of the plants and animals in a forest as it matures. It is a cyclic process because a disturbance, such as a forest fire, can start the forest back at the beginning. Forests are changing all the time. Plants grow and die and are broken down by decomposers, such as insects, fungi and microorganisms, returning their nutrients to the soil. Plants also feed animals that will eventually die and return their nutrients to the soil. So the process goes round and round, renewing the forest generation after generation. Below you can see the progression of a forest from grassy meadow to climax forest.

Test your knowledge by filling out the stages of forest succession using the worksheet below. 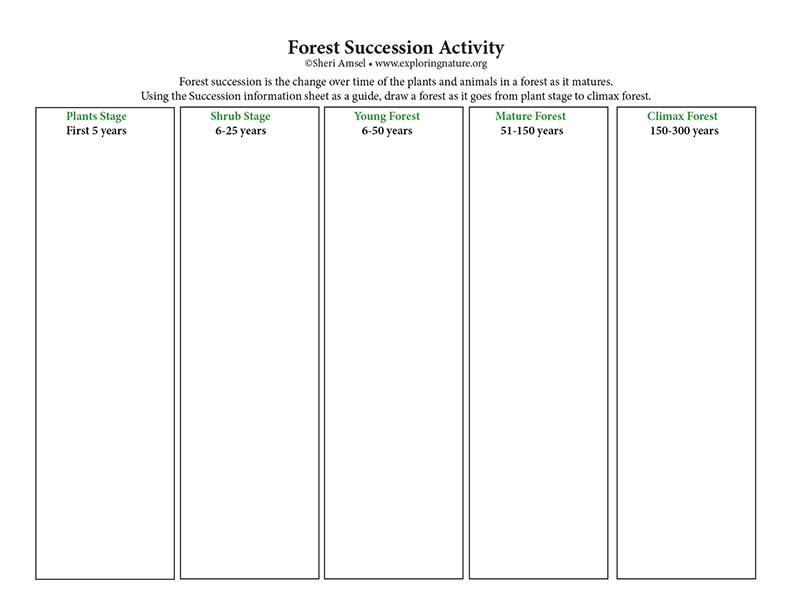 ©2005-2023 Sheri Amsel. All rights reserved.
The material on this site may not be reproduced, distributed, transmitted, cached or otherwise used for anything other than free educational use. It is not to be used for sale or profit of any kind. If you are unsure whether your use of site materials violates the exploringnature.org copyright, contact Sheri Amsel for prior written permission at sheri@exploringnature.org. Thank you for respecting copyright laws.
Site Developed by Eli Madden
Page ID: 4532
IP: 44.192.38.49