What is the food chain?

Energy flows through an ecosystem as one animal eats another animal or plant. A food chain shows “who eats who” in an ecosystem.

Each part of the food chain has a name:

Because animals eat so many things, the food chain has many overlapping parts, so is really a FOOD WEB.

Last but not least, the DECOMPOSERS eat and so recycle dead animals and plants (mushrooms, fungi, insects, bacteria). They are then consumed themselves by other parts of the food web so nothing is wasted.

Something to think about: In a food web, if an important animal is taken out, and there are no other animals to take its place, it can affect all the other animals in the food web. This animal is called a KEYSTONE SPECIES. An example of this is the American alligator. Thirty years ago it was hunted so much in the everglades that it all but disappeared. What people didn’t realize was that the American alligator’s main food is the gar, a big everglade fish. The gar in turn eats a lot of the same fish people like (referred to as game fish). When the American alligator disappeared, the gar (with no other predator) became very plentiful. All the extra gar ate all the game fish. Suddenly fisherman noticed that all the game fish had disappeared and there were gar everywhere. The food web was out of balance. Once the American alligator was protected from hunting, its numbers rose quickly. In turn the number of gar decreased. Soon the game fish returned. The balance was restored. 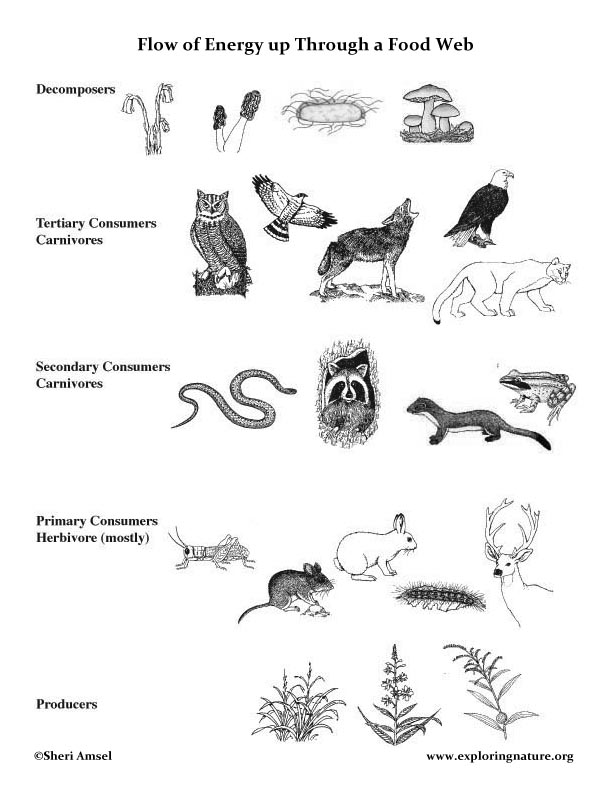 ©2005-2022 Sheri Amsel. All rights reserved.
The material on this site may not be reproduced, distributed, transmitted, cached or otherwise used for anything other than free educational use. It is not to be used for sale or profit of any kind. If you are unsure whether your use of site materials violates the exploringnature.org copyright, contact Sheri Amsel for prior written permission at sheri@exploringnature.org. Thank you for respecting copyright laws.
Site Developed by Eli Madden
Page ID: 1305
IP: 34.229.119.176