Florida is a relatively flat state that was once made up of more than 50% native wetlands. Though much of Florida's wetlands have been destroyed to make way for farms, orchards, roads, towns, cities and other development, there are still many areas of diverse wetland left in the state. Generally, freshwater wetlands are broken down into marshes, swamps and bogs, yet there can be many types of each and Florida is a state that has many types of both freshwater and saltwater wetlands.

Florida has a variety of freshwater marshes. Generally, marshes form near ponds and lakes and are good habitat for reeds, grasses and other soft-stemmed plants to grow. Florida has what are called "wet prairies" which can be floodplains of lakes or rivers or just low lying areas that, at certain times of the year, are covered with water. They are home to water-tolerant plants like sedges, cattails, sawgrass, marsh pinks, sundews and others.

Swamps tend to have more trees and woody-stemmed shrubs and are sometimes so thick with growth that it would be hard to walk through them.

Florida's freshwater swamps include cypress and hardwood swamps. They are found on the floodplains of rivers or in low lying areas higher in the forest. Though Cypress swamps have mostly cypress trees, other kinds of trees are mixed into the habitat. Hardwood swamps have a smaller degree of cypress trees mixed in with oaks, water hickories, maples, palms, bay trees and other trees. These swamps spend much of their time under water, so the trees there must be able to tolerate "wet feet."

Florida's saltwater swamps include mangroves, salt marshes, and the everglades. They are found on protected shorelines of ocean estuaries and bays.

Mangroves are important wetlands for all the reasons already mentioned - they are vital wildlife habitat and offer shoreline protection from erosion and storm surges. They only exist in southern climates and many animals nest and feed among their roots and thick vegetation including osprey, pelican, eagles, herons, ibis, egrets, spoonbills, snails and lizards. Underwater animals like fish, crabs, sea turtles, sponges, shrimp, alligators and even dolphins make use of the mangrove's tangled roots to find safe places to feed or protect young.

Salt marshes are in the zones where the tides go in and out of bays and rivers. Here the water is brackish (where salt and freshwater meet). Plants here must be able to tolerate changes in salinity (how salty the water is) like cordgrass and needlefishes.

The Everglades is a rich habitat made up of a sheet of water flowing slowly over a grassy plain. It is home to a myriad of fish, insects, amphibians and many other animals from osprey, pelican, eagles, herons, ibis, egrets, coots, woodpeckers and spoonbills to alligators, manatees, otters, opossums, raccoons and even a growing population of introduced boa constrictors. It's tremendous value in absorbing storm surges during hurricanes is just beginning to be understood as well as filtering the pollutants flowing out of nearby cities like Miami. Restoration of the Everglades is an ongoing process. 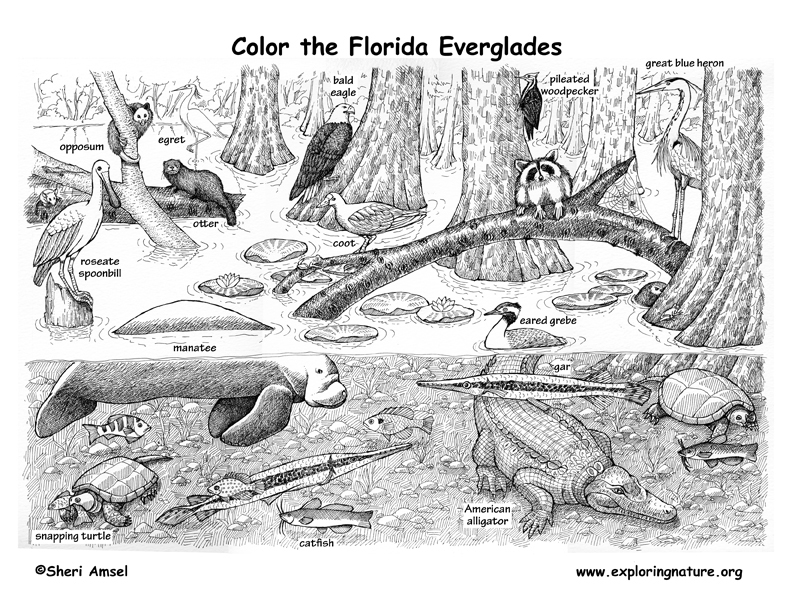 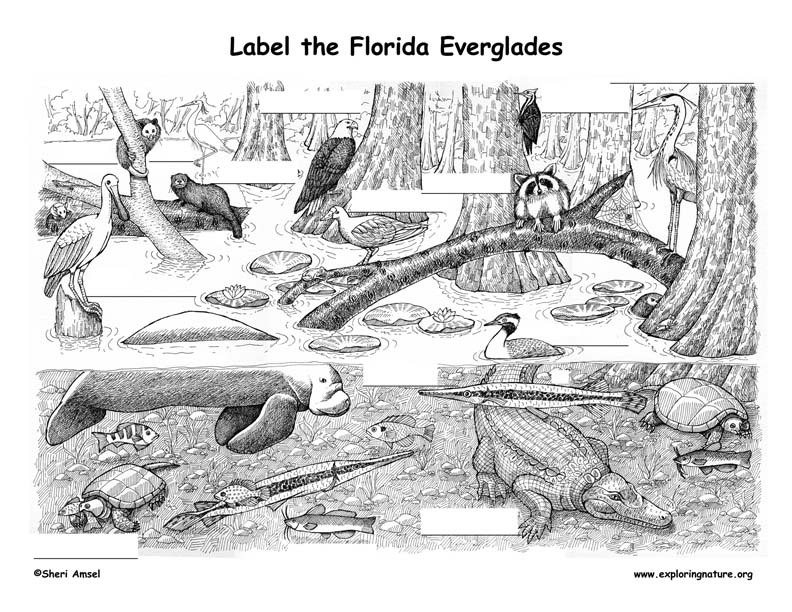 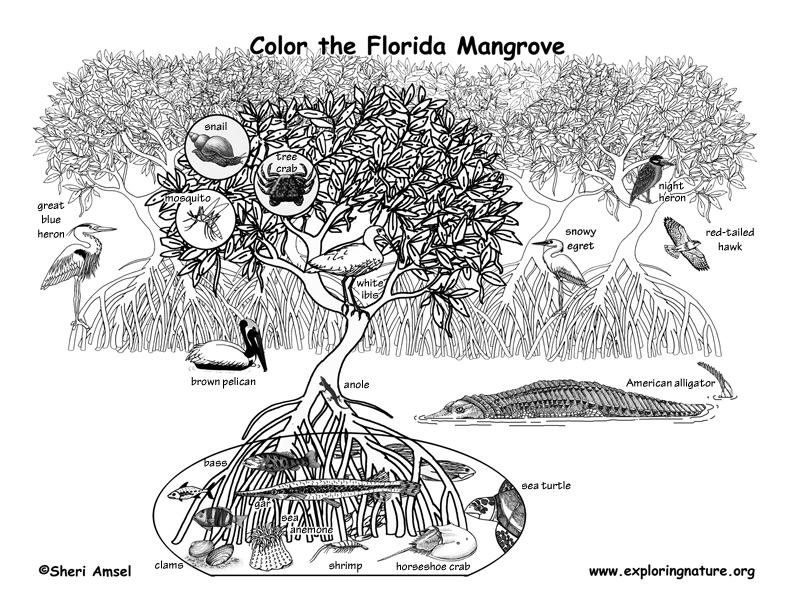 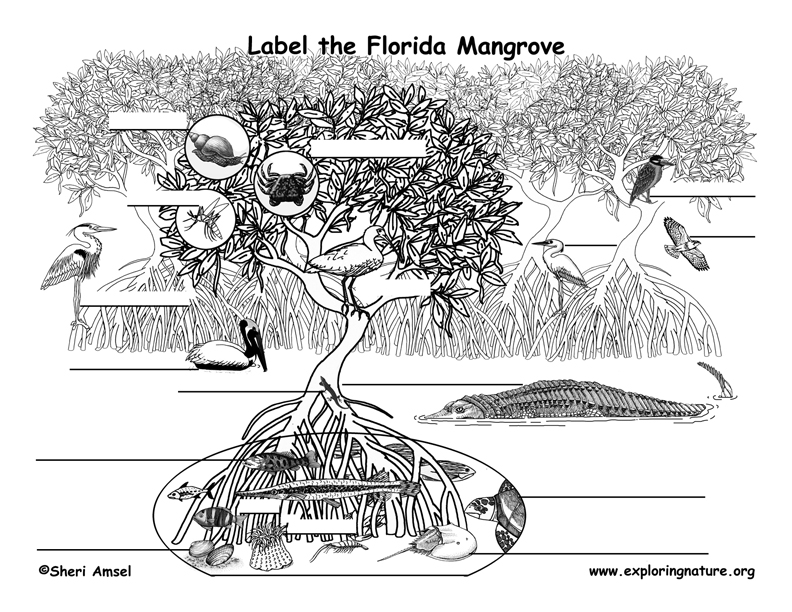 Sea Mammals (off the coast):

For more information about Florida mammals (including Latin names) click on individual animal links or for another (off-site) resource: Mammalogists Society 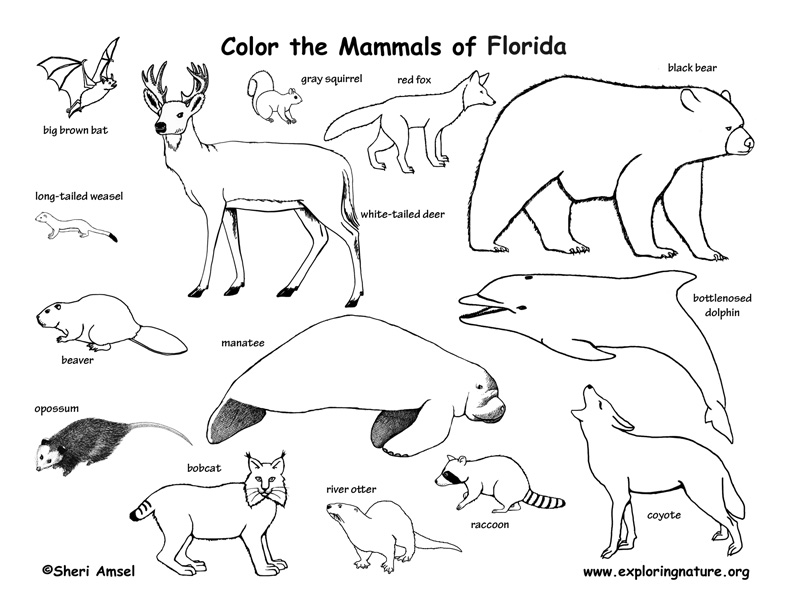 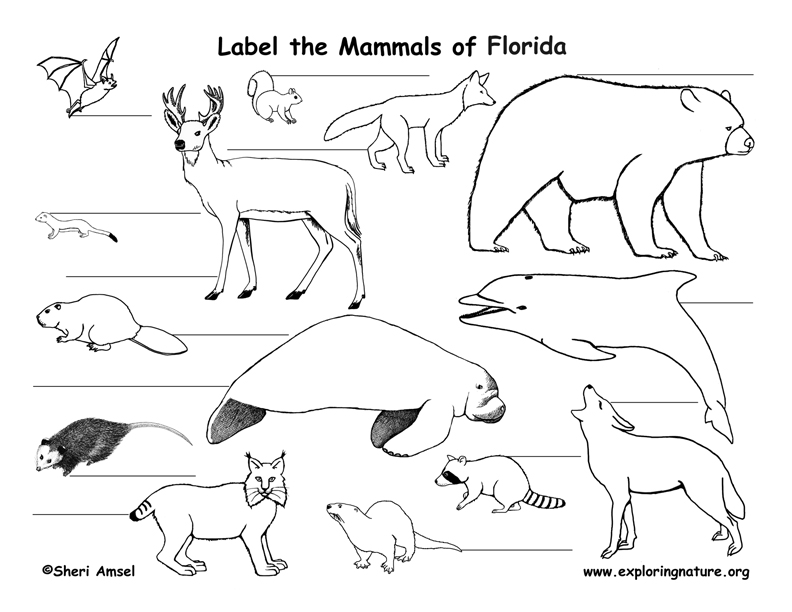 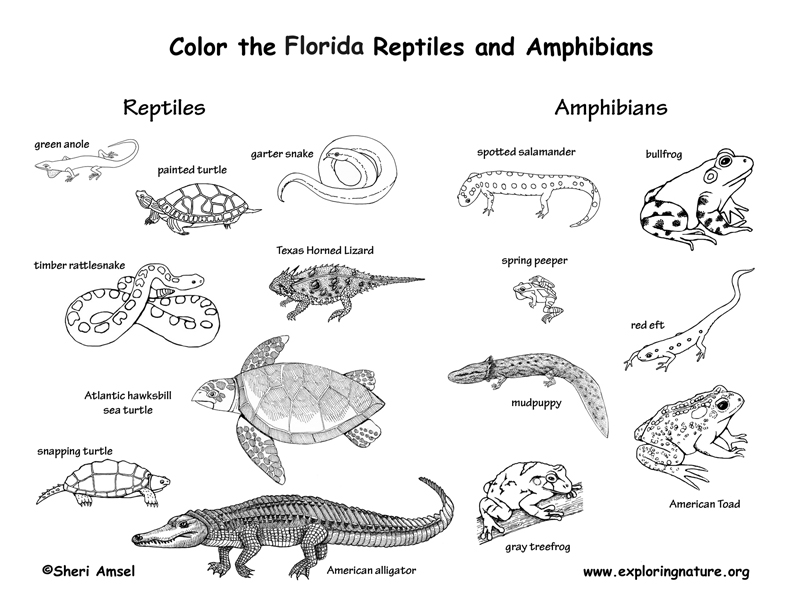 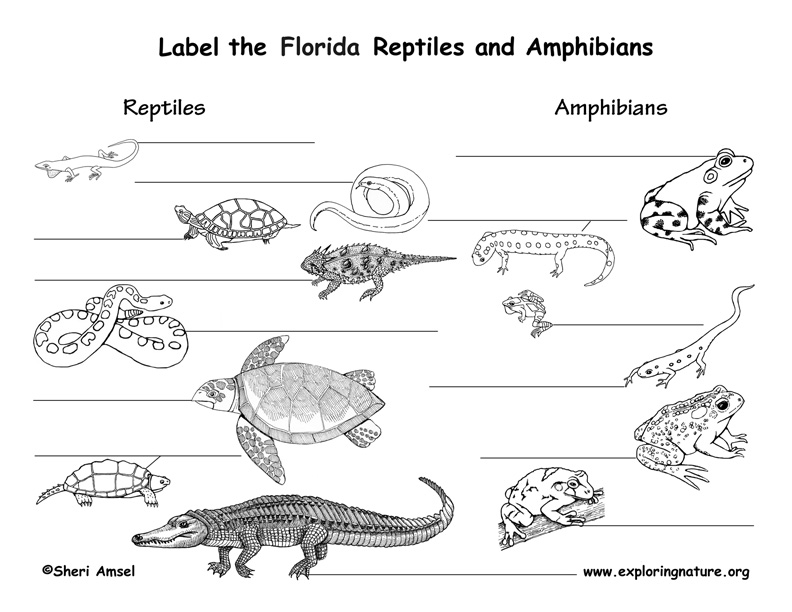 For more information about Florida birds (including Latin names) click on individual animal links or for another (off-site) resource: Florida Ornithological Society 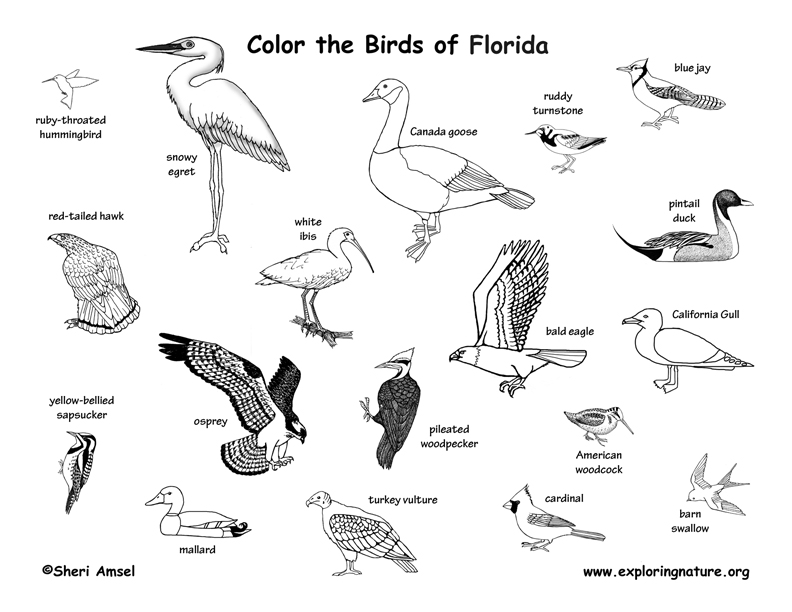 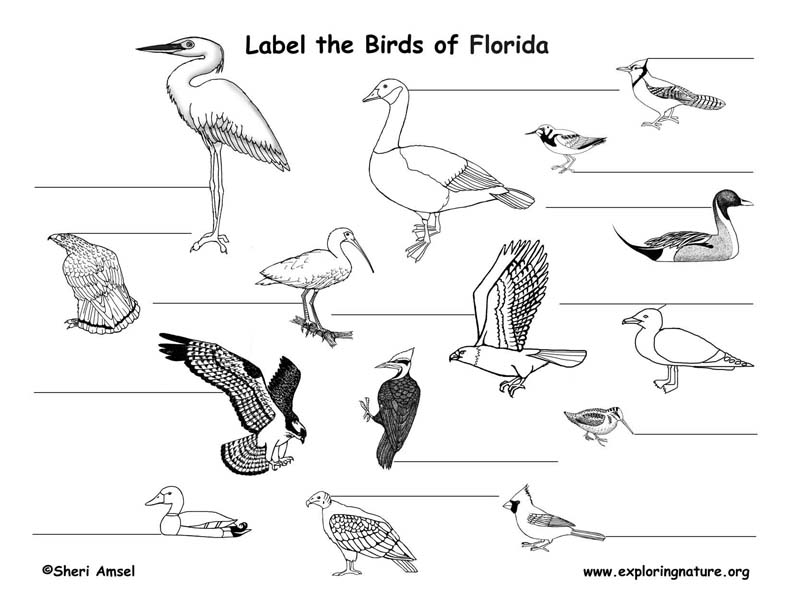 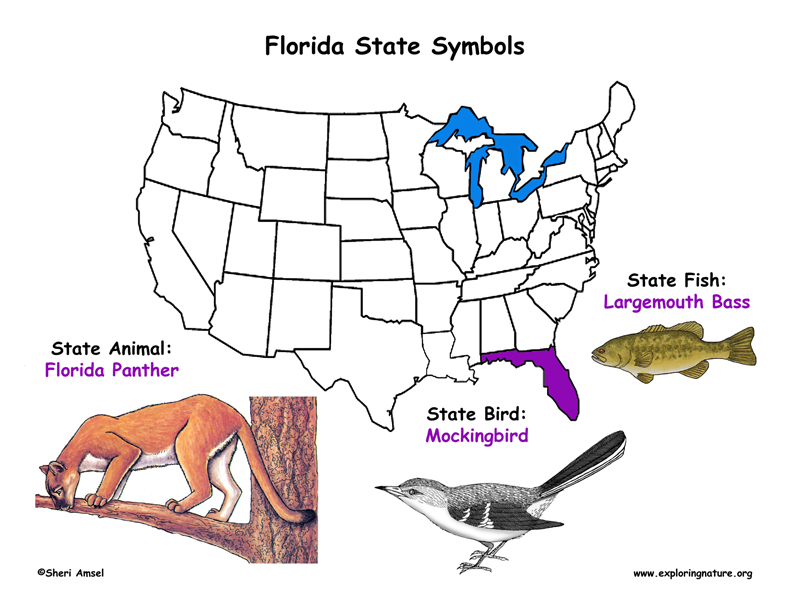 ©2005-2022 Sheri Amsel. All rights reserved.
The material on this site may not be reproduced, distributed, transmitted, cached or otherwise used for anything other than free educational use. It is not to be used for sale or profit of any kind. If you are unsure whether your use of site materials violates the exploringnature.org copyright, contact Sheri Amsel for prior written permission at sheri@exploringnature.org. Thank you for respecting copyright laws.
Site Developed by Eli Madden
Page ID: 797
IP: 3.236.97.59