The femur is the largest and strongest bone in the body. It is a long bone making up about one fourth of your height and is the attachment point for some powerful muscles. At the hip (proximally), the femur's ball-shaped head joins (articulates) with the pelvis in the acetabulum and is secured by a strong ligament (ligamentum teres) attached to the fovea captitis on the head. The head attaches out (laterally) to a short neck that then attaches to the vertical shaft of the femur. Because of the way the head of the femur attaches to the side of the shaft, the neck is the weakest point and most prone to a break.

Where the neck meets the shaft of the femur you will find the greater trochanter on the outside (lateral) and the medial trochanter on the inside (medial) which are connected by the intertrochanteric line in front (anteriorly) and the intertrochanteric crest in the back (posteriorly). The trochanters are attachment points for the powerful muscles of the thigh and butt. More muscle attachment sites are found on the back side of the femur (posteriorly) – the gluteal tuberosity which leads down the shaft to the ridge-like linea aspera. At the bottom (distally), the femur spreads into a wide base with the medial and lateral condyles joining (articulating) with the tibia. Between the condyles is the intercondylar notch. Outside of them are the lateral and medial epicondyles, which are attachment sites for more muscles.  The patellar surface in the front (anteriorly) joins (articulates) with the kneecap (patella). 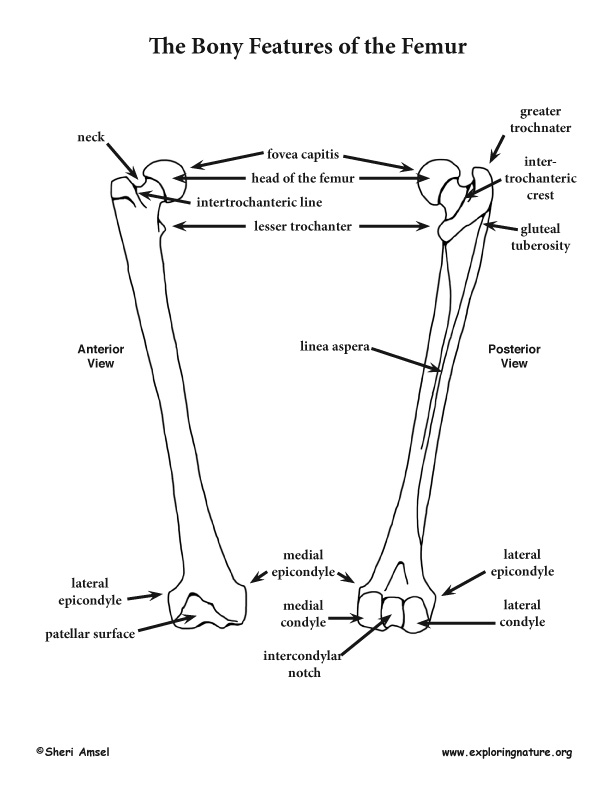 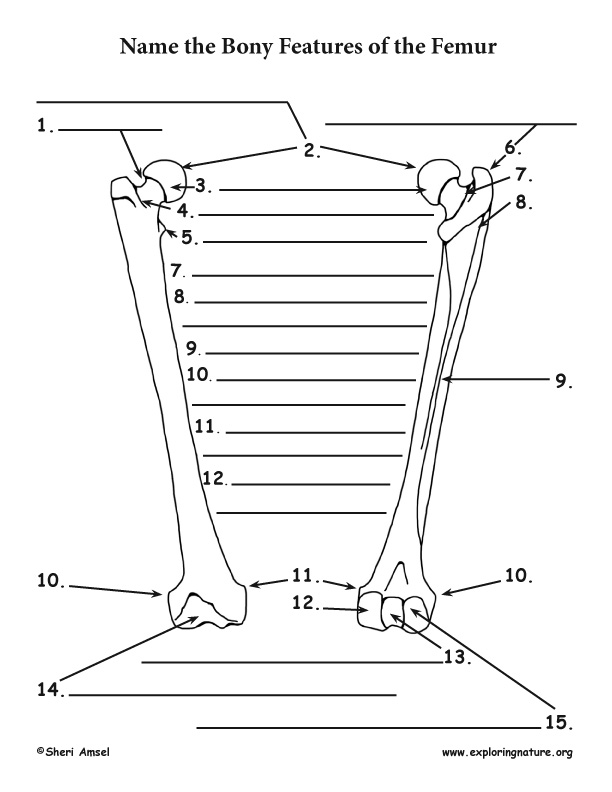 Learn the Bony Features of the Femur and take the Femur Quiz (PDF below).

Grade 6-8 - MS-LS1 From Molecules to Organisms: Structures and Processes

©2005-2022 Sheri Amsel. All rights reserved.
The material on this site may not be reproduced, distributed, transmitted, cached or otherwise used for anything other than free educational use. It is not to be used for sale or profit of any kind. If you are unsure whether your use of site materials violates the exploringnature.org copyright, contact Sheri Amsel for prior written permission at sheri@exploringnature.org. Thank you for respecting copyright laws.
Site Developed by Eli Madden
Page ID: 1066
IP: 44.200.175.255