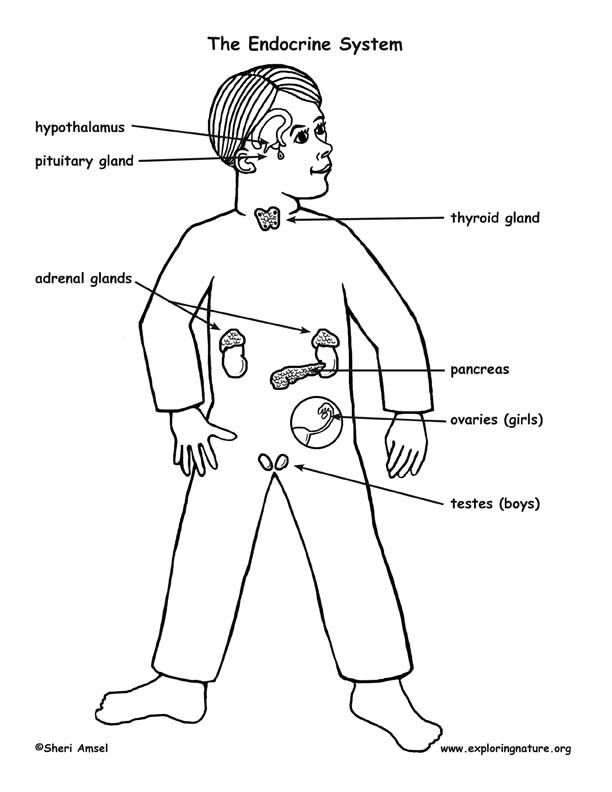 Working together with the nervous system, the endocrine system helps maintain homeostasis in the body. Where the nervous system uses electric signals, the endocrine system uses chemical substances to trigger the body to respond. These chemical substances are called hormones. Hormones are secreted by glands into the bloodstream to affect target cells located somewhere else in the body. They take longer to affect the body than a nerve impulse, but the reaction can last much longer too.

Endocrine glands are found scattered all over the body and are structurally and functionally very different from each another. When a hormone reaches its target organ, it triggers a response in the organ, making its functions speed up or slow down.

Endocrine glands release their hormones into the blood, but these hormones are very specific about which organs they affect. The target organs have receptors just for that hormone, so they are a perfect fit, like a lock and key. For instance, consider the factors that lead up to feeling thirsty. If you exercise and sweat (exocrine secretion), your body loses water. If you lose enough water that it will begin to affect homeostasis, your brain senses it. It triggers your pituitary gland to secrete antidiuretic hormone (ADH – also called vasopressin), which tells your kidneys to retain water. The kidneys go to work reabsorbing water within your renal system. This will result in less urination. If your system needs still more water, your brain will then trigger a conscious order for you to drink – you will feel thirsty. Once you've drunk enough water, your brain will tell the pituitary gland to stop secreting ADH. Your thirst will feel quenched. Your endocrine system, working in conjunction with your nervous system, has maintained your body’s homeostasis.

Anatomically, the pituitary gland is a small, pea-sized gland. It sits in a bony seat of your skull called the sella turcica in between the two hemispheres of your cerebrum. The pituitary gland is divided up into an anterior and posterior pituitary with two distinct origins and functions.

Luteinizing hormone (LH) (also called lutropin) targets the ovaries in females and the testes in males. It controls reproductive function.

The posterior pituitary is also called the neurohypophysis and is an extension of the hypothalamus connected by the infundibular stalk. It stores and releases (but does not make) two hormones.

Oxytocin targets the ovaries in females and the testes in males. It triggers milk secretion (let down) and uterine contractions during the birthing process.

The thyroid gland is a butterfly-shaped gland that sits in the front of the neck. It is the largest endocrine gland in the body and makes three hormones with very important jobs affecting your metabolism - the chemical processes that happen inside your body to keep you alive and your body functioning in homeostasis. Thyroid hormone (TH) targets every cell in your body telling them how fast to run things (metabolic rate). If the thyroid sends out too much or too little TH it can have a big affect. Too much thyroid hormone (hyperthyroidism) causes the body to run too fast and hot. It makes you sleepless and anxious, with a pounding heart. Too little thyroid hormone (hypothyroidism) causes the body to be cold, sluggish and depressed. Just the right amount of hormones makes you healthy and keeps your body running smoothly.

The pancreas is actually made up of two glands with some endocrine cells and some cells that help complete digestion. The non-endocrine cells secrete pancreatic juice into the digested food leaving the stomach to raise the pH that is low from the acidic digestive juices.

The endocrine cells make insulin, a hormone important for regulating the levels of sugar (glucose) in the blood. After you eat, food is broken down into its simplest form, taken into the blood and delivered to all the body’s tissues as fuel. Insulin’s function is to pull that blood sugar out of the blood into the cells where it is used as fuel. If the endocrine cells of the pancreas don’t make and secrete insulin, the sugar stays in the blood and doesn’t feed the hungry tissues. Instead, the sugar (glucose) is lost in the urine. The body thinks it’s starving even though you are eating. To feed itself, the body will start to break down other tissues. Since the sugar does not go into the cells, it pours into the urine, a condition called diabetes mellitus (Type I diabetes), which means “sweet urine.” The only treatment known for severe diabetes mellitus is regular shots of insulin.

There are two adrenal glands, each one sitting on top of one of the kidneys, like a cap.  The adrenal glands are made up of two parts, the outer adrenal cortex and the inner adrenal medulla. Each region is responsible for different hormones.

The adrenal cortex secretes hormones into the bloodstream that help maintain metabolic homeostasis. They include:

Hydrocortisone (cortisol), which affects the body’s metabolism of fats, proteins, and carbohydrates.

Corticosterone, which works with hydrocortisone to lower inflammatory reactions of the body and enhance the immune system.

Aldosterone, which balances sodium (Na+) and potassium (K+) in the body and helps regulate blood pressure and volume.

Androgenic steroids (androgen hormones), which can be converted to a secondary source of male and female hormones (estrogen and androgens).

Over all, the adrenal cortex keeps your heart rate, blood pressure and energy levels normal. They also balance the amount of water, sodium, potassium, and other ions that are in your body. These ions are important for different jobs throughout your body, like muscle contractions and nerve impulses. If the ion levels in your blood get too low, your adrenal gland will release a hormone that tells your kidney to keep more sodium. Once you have enough sodium, you will stop releasing the hormone.

The adrenal medulla secretes hormones that help the body deal with physical and emotional stress. They include:

Epinephrine, which helps the body respond to stress by inciting the “Fight or Flight response” - increasing heart rate, blood flow to the muscles and brain and the release of glucose.

Norepinephrine, which constricts the blow vessels and raises blood pressure during stressful situations.

Endocrine Gland Control
Too much or too little of any hormone can have a bad effect on the body. So the body uses a negative feedback system to control hormone levels. Hormones are released from a gland when the brain senses that the body needs them. This is usually triggered by a stimulus, like not having enough water or having too much salt. Also, the pancreas releases insulin after you eat because it senses a lot of sugar entering the blood as you’re digesting the food in your intestine. Then the insulin begins to help the sugar in your blood go into your cells to fuel your tissues. Soon the sugar levels in your blood go down again. The levels get so low that the pancreas stops getting its blood sugar stimulus. This stops it from releasing any more insulin. This feedback tells the cells of the pancreas that there is no more blood sugar to deal with, so it stops secreting insulin.

Hormone Imbalances
Sometimes an endocrine gland malfunctions and the body cannot maintain homeostasis. A common example of this are the endocrine cells in the pancreas. Sometimes they start stop working or start to break down later in adulthood. When this happens there is no insulin made and released into the blood. So the sugar in the blood can’t get into the tissues to fuel them. As you read earlier, this is the cause of diabetes, but how does the doctor know that this is the problem? A person with this type of diabetes has three main signs that doctors know to look for. First, all that sugar in the blood confuses and damages the kidneys. The kidneys will dump the sugar into the urine to get rid of it. So doctors see high levels of sugar in the urine. Second, flushing the sugar out of the blood uses large amounts of water. This causes the person to urinate all the time. This is called polyuria. Third, because they are losing water this way, a diabetic person is thirsty all the time. This is called polydipsia. Because the cells and tissues are starved for fuel, people with diabetes also become weak and get tired easily. Those are the three signs that something is not right with the endocrine cells in the pancreas. 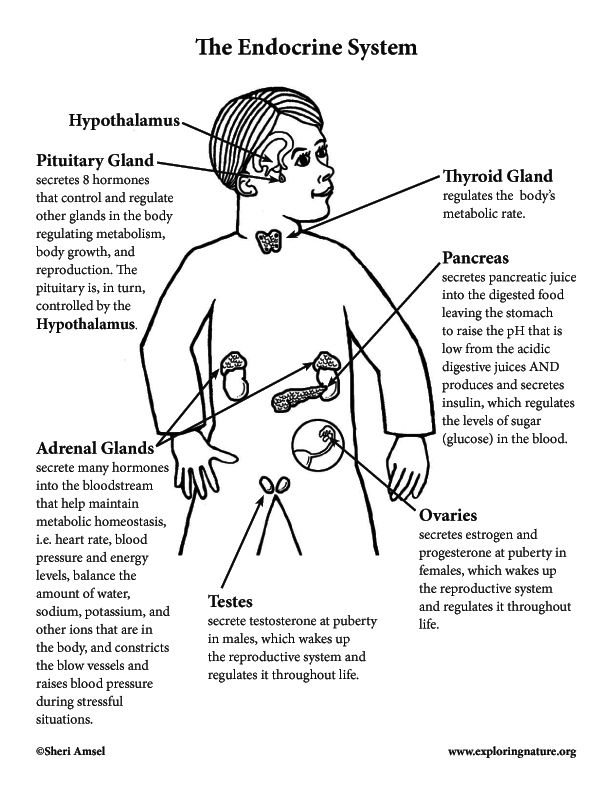 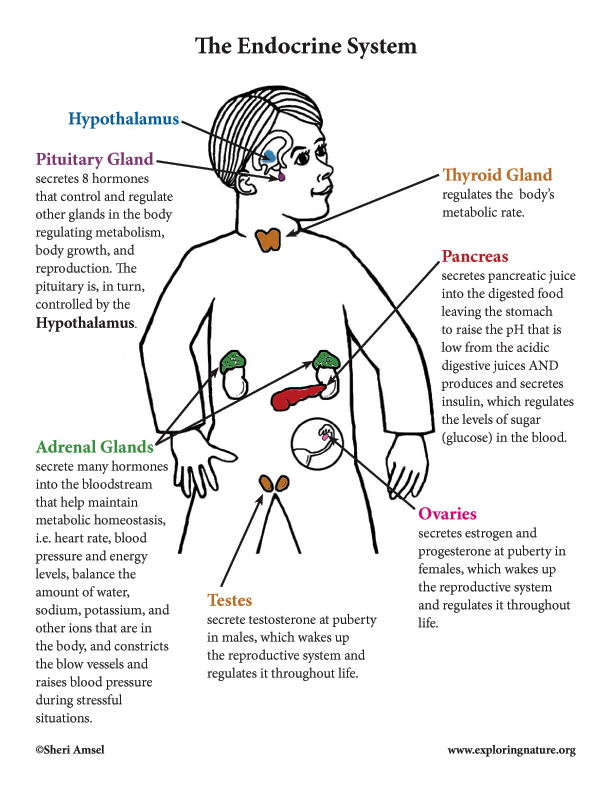 ©2005-2022 Sheri Amsel. All rights reserved.
The material on this site may not be reproduced, distributed, transmitted, cached or otherwise used for anything other than free educational use. It is not to be used for sale or profit of any kind. If you are unsure whether your use of site materials violates the exploringnature.org copyright, contact Sheri Amsel for prior written permission at sheri@exploringnature.org. Thank you for respecting copyright laws.
Site Developed by Eli Madden
Page ID: 1073
IP: 54.225.48.56