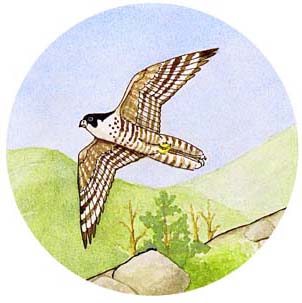 The peregrine falcon was once very close to extinction. This was not from over-hunting or habitat loss, but from use of the pesticide DDT. For 30 years, starting in the 1940s, DDT was a chemical pesticide that was sprayed in wetlands to kill mosquitoes. It worked really well for killing mosquitoes, but it caused a serious problem. The fish, frogs and small birds that ate lots and lots of the mosquitoes started to build up DDT in their bodies. Then bigger predators, like the peregrine falcons, ate lots of small birds. They got an even bigger dose of DDT as it moved up through the food chain. DDT wasn't poisonous enough to kill the falcons outright, but it caused their eggs to have soft shells. All their eggs broke, so no new young falcons could be born. Peregrine falcons started to disappear. Within a few years, they were endangered.

Once scientists discovered what the DDT did in the food chain, they knew the chemical had be banned. On June 14, 1972, the Environmental Protection Agency made DDT illegal to use in the United States. Then animal populations slowly began to recover. The peregrine falcon was so endangered by then though that it needed help. Wildlife biologists used a captive breeding program to help the peregrine falcons to recover. They took wild falcons and hand raised many nestlings for release until their numbers were high enough that they would not go extinct.

Now it is not unusual to see peregrine falcons nesting on skyscrapers in New York City hunting pigeons.

©2005-2022 Sheri Amsel. All rights reserved.
The material on this site may not be reproduced, distributed, transmitted, cached or otherwise used for anything other than free educational use. It is not to be used for sale or profit of any kind. If you are unsure whether your use of site materials violates the exploringnature.org copyright, contact Sheri Amsel for prior written permission at sheri@exploringnature.org. Thank you for respecting copyright laws.
Site Developed by Eli Madden
Page ID: 642
IP: 54.225.48.56