Endangered Species In Your Backyard 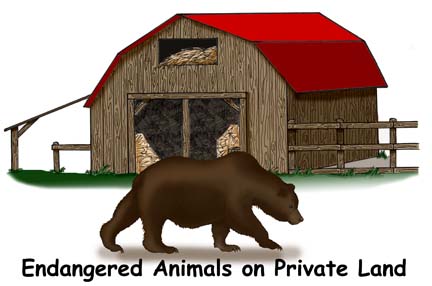 To help solve this problem, the U. S. Fish and Wildlife Service has special consultants who will work with landowners and offer grants to help people overcome their problems with endangered species on their property, including lost income or land value.

A fund called the “Defenders of Wildlife’s Predator Compensation Fund” was started to pay ranchers for cattle and sheep killed by grizzlies or wolves. They also helped ranchers come up with other ways to protect their herds. They helped them get electric fences and guard dogs. They got rid of dead cattle carcasses that might attract grizzlies. This helped make the ranchers less angry at the bears and accept them as neighbors.

Then, in 2003, the National Wildlife Federation and others started a fund. They would pay ranchers to give up their leased lands in areas where the grizzlies hunted. They would move to safer grazing areas away from Yellowstone. They called this “retiring their allotments.” Conservationists have retired more than 300,000 acres of former grazing allotments in the greater Yellowstone area so far.

©2005-2022 Sheri Amsel. All rights reserved.
The material on this site may not be reproduced, distributed, transmitted, cached or otherwise used for anything other than free educational use. It is not to be used for sale or profit of any kind. If you are unsure whether your use of site materials violates the exploringnature.org copyright, contact Sheri Amsel for prior written permission at sheri@exploringnature.org. Thank you for respecting copyright laws.
Site Developed by Eli Madden
Page ID: 643
IP: 54.225.48.56