For years, dogs have been trained to sniff out drugs hidden in traveler’s baggage. Now biological engineers at the University of Georgia have discovered that wasps can do it just at well, without the dog biscuits. The wasps are trained so that when they smell the drugs, they will be fed. After that, whenever the wasp’s sensitive antennae detect the odor of drugs, the wasps react like they are about to be fed.

The wasps are kept in a small, hand-held canister so they can be brought on site for drug sniffing. Wasps only live for about two days, so new wasps have to be brought in and trained (training only take about ten minutes) regularly.

Scientists have shown that wasps can also be used to sniff out bombs, toxins or even dead bodies. 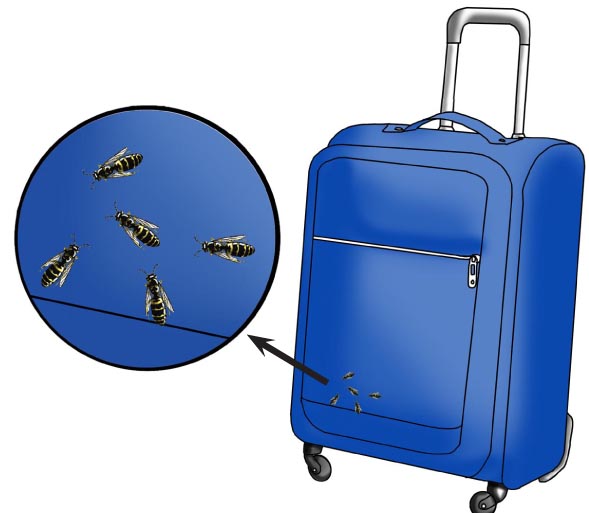 1. How do humans use artificial selection to use wasps in the detection of drug trafficking?

LS4.B: Natural Selection: LINK
In artificial selection, humans have the capacity to influence certain characteristics of organisms by selective breeding. One can choose desired parental traits determined by genes, which are then passed on to offspring. (MS-LS4-5)

Connections to Nature of Science
Scientific Knowledge is Based on Empirical Evidence
• Science knowledge is based upon logical and conceptual connections between evidence and explanations. (MS-LS4-1)

Connections to Engineering, Technology and Applications of Science

©2005-2022 Sheri Amsel. All rights reserved.
The material on this site may not be reproduced, distributed, transmitted, cached or otherwise used for anything other than free educational use. It is not to be used for sale or profit of any kind. If you are unsure whether your use of site materials violates the exploringnature.org copyright, contact Sheri Amsel for prior written permission at sheri@exploringnature.org. Thank you for respecting copyright laws.
Site Developed by Eli Madden
Page ID: 1582
IP: 18.204.56.185