Dr. Stephen Jay Gould liked to think about evolution (the changes in populations of living things over time that might make them better adapted for their environment). For most scientists, evolution has always been thought to be a slow, steady process of change over time. Dr. Gould however, after studying the fossil record, proposed a different theory. The theory of "punctuated equilibrium." This is where evolutionary change (as seen in the fossil record) comes in fits and starts with sudden appearances of new species followed by long periods with little changes at all. This would explain why there seems to be such incompleteness in the fossil record. Dr. Gould, who passed away in May 2002 after a battle with cancer, wrote many books including "Wonderful Life," "The Mismeasure of Man," "Bully for Brontosaurus," and his last work, "The Structure of Evolutionary Theory." More information about Dr. Gould. 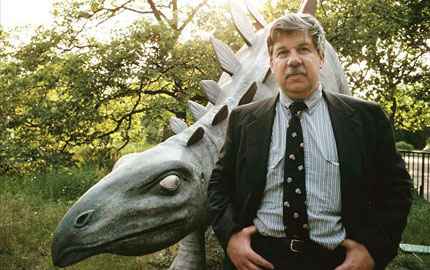 ©2005-2022 Sheri Amsel. All rights reserved.
The material on this site may not be reproduced, distributed, transmitted, cached or otherwise used for anything other than free educational use. It is not to be used for sale or profit of any kind. If you are unsure whether your use of site materials violates the exploringnature.org copyright, contact Sheri Amsel for prior written permission at sheri@exploringnature.org. Thank you for respecting copyright laws.
Site Developed by Eli Madden
Page ID: 1637
IP: 44.200.175.255