Jane Goodall observed chimpanzee behavior for a quarter century in the jungles of the Gombe Game Reserve in Africa. Her observations, discoveries and consequential writing led to huge changes in how we think about the evolution of humans, conservation and the treatment of primates throughout the world. She discovered that chimpanzees battle among themselves in "wars" and watched as one group of chimpanzees succeeded in killing off the members of another group. This was a characteristic that before that time was attributed only to humans. She received a Ph.D. from Cambridge University in 1965 and many honorary awards internationally for her ground-breaking research. She published dozens of scientific papers and many books and articles. In 1977 she founded the Jane Goodall Institute to increase habitat conservation, environmental education, primate research and protection. To this day, Jane Goodall spends much of her time lecturing around the world and sharing her message of hope for the future. She hopes to encourage young people to make a difference in their world. Jane Goodall Institute 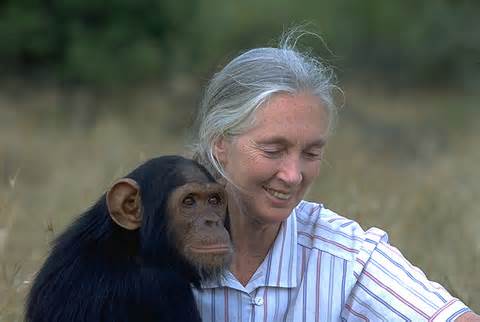 ©2005-2022 Sheri Amsel. All rights reserved.
The material on this site may not be reproduced, distributed, transmitted, cached or otherwise used for anything other than free educational use. It is not to be used for sale or profit of any kind. If you are unsure whether your use of site materials violates the exploringnature.org copyright, contact Sheri Amsel for prior written permission at sheri@exploringnature.org. Thank you for respecting copyright laws.
Site Developed by Eli Madden
Page ID: 1638
IP: 34.236.192.4