In 1953, Dr. Francis Crick and Dr. James Watson made history by discovering and making a model of DNA, the basic unit of our genes. Dr. Crick coined the term "Central Dogma of Molecular Biology," which is that "DNA makes RNA makes proteins," a surprisingly simple concept with huge scientific significance. After winning the Nobel Prize in 1962 for their work, Crick moved on to study RNA. Then in 1976 he moved to the Salk Institute in California to study the brain and the understanding of consciousness. He worked there until his death in 2004 at he age of 88. 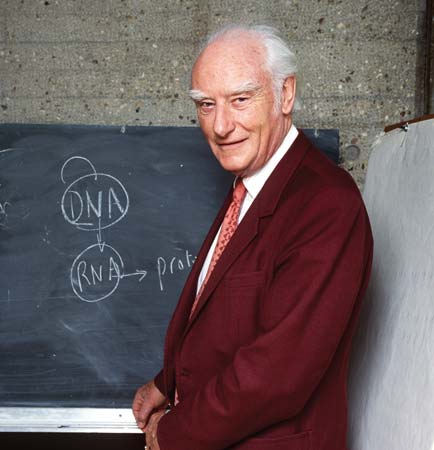 ©2005-2022 Sheri Amsel. All rights reserved.
The material on this site may not be reproduced, distributed, transmitted, cached or otherwise used for anything other than free educational use. It is not to be used for sale or profit of any kind. If you are unsure whether your use of site materials violates the exploringnature.org copyright, contact Sheri Amsel for prior written permission at sheri@exploringnature.org. Thank you for respecting copyright laws.
Site Developed by Eli Madden
Page ID: 1639
IP: 3.91.22.125