Man's domestication of wild dogs into faithful companions began some 10,000 years ago. Over the centuries, many desirable traits have been bred into dogs like speed, strength, color, shape, hunting ability, loyalty, friendliness and fierceness. But with the good traits some serious bad traits have tagged along.

Off site resource from Discover: http://discovermagazine.com/2006/mar/dog-genome-diseases 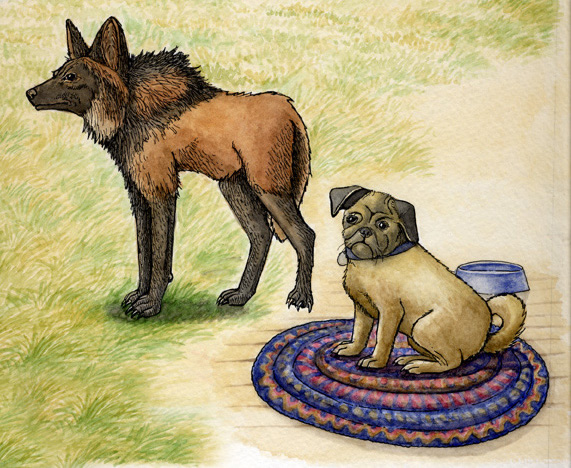 1. Has our inbreeding of dogs, to create the "breeds" we like, produced mutations that are harmful to their health?

LS3.B: Variation of Traits: LINK
• In sexually reproducing organisms, each parent contributes half of the genes acquired (at random) by the offspring. Individuals have two of each chromosome and hence two alleles of each gene, one acquired from each parent. These versions may be identical or may differ from each other. (MS-LS3-2)
• In addition to variations that arise from sexual reproduction, genetic information can be altered because of mutations. Though rare, mutations may result in changes to the structure and function of proteins. Some changes are beneficial, others harmful, and some neutral to the organism. (MS-LS3-1)

• Provide a few links online to get them started obtaining information.

• Once they find some sources, they should evaluate them and communicate their findings to the rest of the class.

Practice analyzing and interpreting the data they find.

• Then suggest ways that they can identify patterns, cause and effect, etc.

6) Make note of other questions generated in the process of exploring this Scientific Phenomena.

• Discuss them as a class.

©2005-2022 Sheri Amsel. All rights reserved.
The material on this site may not be reproduced, distributed, transmitted, cached or otherwise used for anything other than free educational use. It is not to be used for sale or profit of any kind. If you are unsure whether your use of site materials violates the exploringnature.org copyright, contact Sheri Amsel for prior written permission at sheri@exploringnature.org. Thank you for respecting copyright laws.
Site Developed by Eli Madden
Page ID: 1584
IP: 54.161.2.204