Human activities affect the Earth’s biosphere, as we harvest resources and develop areas for our growing global population. As we change, damage, and even destroy habitats, we have begun to discover how these actions affect the world’s climate and populations – including us.

One class of animals that has been significantly affected by the changing planet are birds. Scientists believe that 25% of all birds have disappeared from North America in the last 50 years. This is happening for many reasons.

1) Birds have been affected by pesticides used on agricultural crops, parks, lawns, and gardens.

2) They are killed flying into obstructions, such as turbines, power lines, skyscrapers, cell towers, and vehicles.

3) Bright lights used to warn off low flying planes, affect a bird’s ability to see obstructions when flying at night.

4) Light pollution blocks their ability to use the stars as a guide while migrating.

5) House cats and feral cats are thought to kill billions of birds every year.

The Challenge for Migrating Birds:
• They are using a lot of energy to travel from winter feeding grounds to summer breeding grounds and back every year.

• They are often hunted as they stop at familiar annual feeding grounds.

• They might discover that the habitats on which they depended for food and rest have been destroyed (habitat loss).

• Climate change has made these problems worse with droughts, floods, fires, and more intense seasonal storms.

• As the planet heats up, migrating birds will have to travel further north to find suitable breeding habitats to raise young, further depleting their energy reserves.

• Another strange effect of climate change is food timing. As spring temperatures arrive earlier, the emergence of caterpillars and flying insects occurs earlier too. These insects, on which migrating birds feed, may soon come too early for them to use as fuel in their travels.

Why Should We Care About Birds?
Besides for the fact that birds are beautiful and fascinating members of our animal kingdom, they also play an important roll in maintaining healthy habitats.
1) Birds are important seed spreaders, consuming seeds at one location and “depositing” them later somewhere else in their droppings.

2) Some birds play a role in pollination. Both pollination and seed spreading result in more plants and trees, which supports different industries, including wood products and agriculture and can help prevent erosion and deforestation.

3) Birds consume mosquitoes and other insects and invertebrates that humans consider to be pests, and which can carry and spread serious diseases, such as malaria.

4) Birds are part of countless predator-prey relationships keeping a healthy balance in a myriad of habitats.

5) They can be important scavengers, consuming dead animal tissue left on roadways.

6) They are an important food source for human populations as meat and eggs.

7) They are also a draw for ecotourism, attracting hundreds of thousands birders to locations around the world every year, supporting hotels, restaurants, and shops.

8) Birds are sensitive to environmental changes in their habitats. This is helpful because, as we monitor bird numbers in different locations, their decline is in important indicator of environmental health or degradation. This can affect other wildlife and human health as well. It was the drastic decline of birds, described in Rachel Carson’s 1962 book, Silent Spring, that led to the public’s awareness that pesticides were endangering entire habitats and food webs. To this day, researchers use birds to monitor toxins, heavy metals and pesticides in different habitats as an early warning system to protect habitats and human health.

Scientists call this ecosystem services, because birds, in their natural roles, support and improve human life. 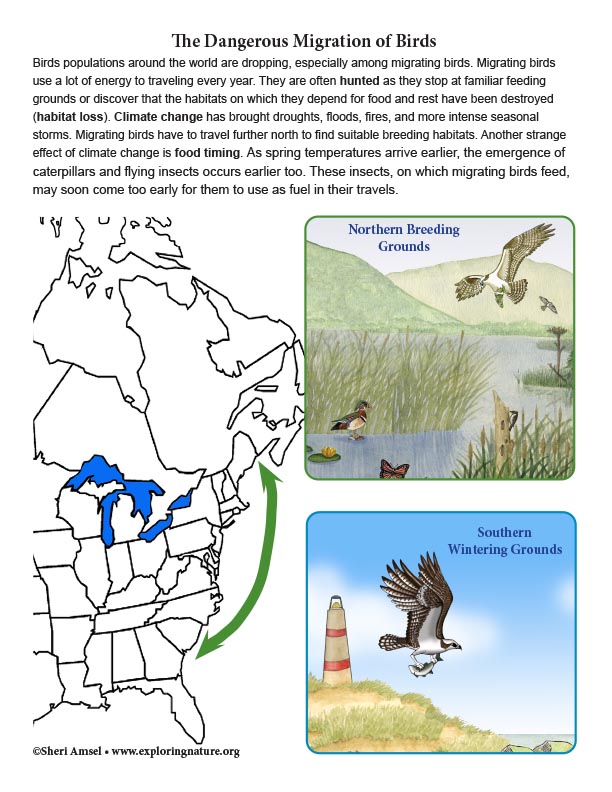 10 Ways to Minimize Human Impact on Birds
There are things that people can do to minimize the threat to birds worldwide.
1) Gardeners and home owners can plant more native species of plants, shrubs and trees in your yard to provide food, cover, and nesting areas for birds.

2) Put up appropriately made bird nesting boxes in your garden.

3) Stop using pesticides and herbicides on lawns and gardens. In turn, birds will fill the yard with a cacophony of song, help pollinate flowers, and eat pest insects.

4) Keep house cats inside, especially in the spring and early summer when baby birds are fledging.

5) Birds hitting windows is believed to kill millions of birds every year. If your home has a lot of large windows, do some research about how to make windows safer to avoid bird collisions.

6) Get involved with one of the many annual bird counts to help scientists keep track of declining populations. Learning to identify birds and watching for them in an annual bird count can become a life long citizen scientist project to share with friends and family.

8) Leave birds alone to live their lives. It is okay to view them from a distance, but disturbing them frightens them off the next and uses up their energy as well as exposing their young to potential predators.

9) Never buy endangered birds for pets, as this supports the illegal capture of wild birds.

10) Lastly, and maybe most importantly, never litter and use less plastic. Plastic waste has made its way into all our waterways, habitats, and even our food supply. Birds and other wildlife consume plastics thinking it is food. They also become tangled in plastic nets, bags, and packaging. It’s important to understand that plastic take hundreds of years to decompose, so our plastic waste problem is growing every year. The only way to stop the accumulation of plastics is to stop manufacturing it, using it, and throwing it away. It may seem a daunting task with all the plastic we use in daily life, but products made with alternative materials to plastics are growing as people become more aware.

1) Choose one or more of these ways to minimize human impacts and do some research on them.

2) Find out how severely these human activities are impacting bird populations.

3) Give more details about how one (or more) of these ideas can help protect birds.

4) Read about one of the bird monitoring plans and create a visual aid to promote the idea to other students (or people in your community).

Next Generation Science Standards Addressed by This Resource

ESS3.C: Human Impacts on Earth Systems
• Human activities have significantly altered the biosphere, sometimes damaging or destroying natural habitats and causing the extinction of other species. But changes to Earth’s environments can have different impacts (negative and positive) for different living things. (MS-ESS3-3)

Performance Expectations - Students who demonstrate understanding can:
MS-ESS3-3. Apply scientific principles to design a method for monitoring and minimizing a human impact on the environment. [Clarification Statement: Examples of the design process include examining human environmental impacts, assessing the kinds of solutions that are feasible, and designing and evaluating solutions that could reduce that impact. Examples of human impacts can include water usage (such as the withdrawal of water from streams and aquifers or the construction of dams and levees), land usage (such as urban development, agriculture, or the removal of wetlands), and pollution (such as of the air, water, or land).]

©2005-2022 Sheri Amsel. All rights reserved.
The material on this site may not be reproduced, distributed, transmitted, cached or otherwise used for anything other than free educational use. It is not to be used for sale or profit of any kind. If you are unsure whether your use of site materials violates the exploringnature.org copyright, contact Sheri Amsel for prior written permission at sheri@exploringnature.org. Thank you for respecting copyright laws.
Site Developed by Eli Madden
Page ID: 6236
IP: 3.238.118.80