Background: DDT, a chemical insecticide, was invented in the late 1930s. It was so effective in killing the pests that cause malaria, typhus, dysentery and typhoid fever, that it was used extensively in WWll and afterward. It became hugely popular, despite minimal testing.

Environmental Disaster: There were signs that DDT had some serious side effects. In 1945, the U.S. Department of Agriculture sprayed DDT (5 pounds per acre) on an oak forest in Pennsylvania that was infested with gypsy moths. It killed them all within hours, but it also killed every bird in the forest - more than 4,000 within a week. Using less DDT (1 pound per acre) seemed to work on the moths without killing the birds, but it still killed aquatic life.

DDT was not water soluble, so it stayed around and kept killing pests for weeks and even months. This concerned some scientists as it could not be washed off fruit after harvest and so was eaten by consumers, including small children. Later it was discovered that it stayed in food webs too and was passed up to consumers in higher and higher concentrations. By the time it reached bald eagles, peregrine falcons, and pelicans, it had a profound effect. Thinning egg shells crumbled when they tried to incubate their young. Entire generations of these birds were decimated by DDT.

In her 1962, Silent Spring, biologist, Rachel Carson warned of the long-term effects of chemical pesticides, specifically DDT. Despite being attacked by the chemical industry, the scientific foundation of her work stood up to scrutiny. President Kennedy was so moved by her book, he ordered the testing of pesticides. By 1972, it was banned in the U.S.

Monitor and Minimize Effects: DDT was replaced by other pesticides, but over time, with the development of the Environmental Protection Agency (EPA), new testing guidelines limited the amount of pesticide that could be left on foods (maximum legal residue). This resulted in passing the Food Quality Protection Act (FQPA) in 1996.

The Costs: UC Berkeley researchers studied the effects of banning pesticides on crop production. In 2002, they suggested that the total loss to producers and consumers in California would be about $200 million. This would lead to higher food prices, which could result in reduced consumption of fruits and vegetables. They suggest that consuming less produce would lead to more dietary related illness, such as obesity, cancer, strokes, etc. Finding a balance between rising food costs and pest control will be a long term project, perhaps involving Bt and other genetic engineering solutions. 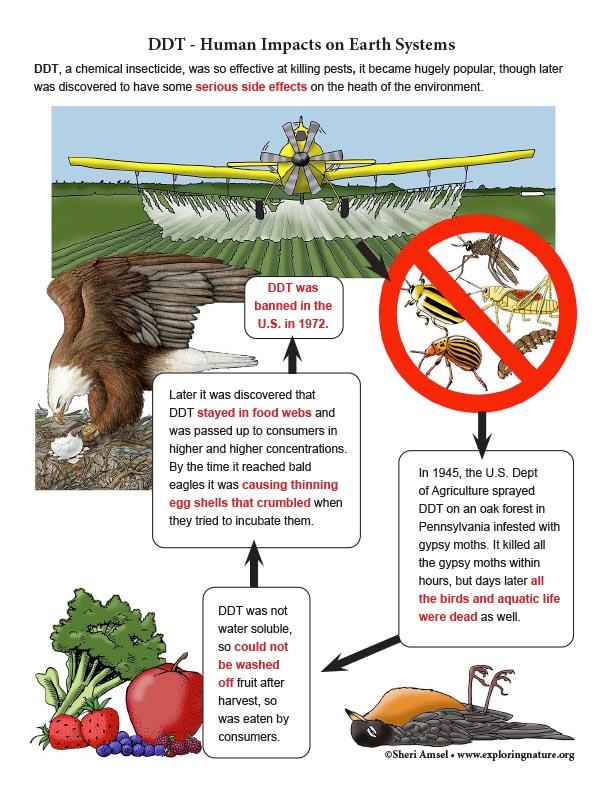 Next Generation Science Standards Addressed by This Resource

ESS3.C: Human Impacts on Earth Systems
• Human activities have significantly altered the biosphere, sometimes damaging or destroying natural habitats and causing the extinction of other species. But changes to Earth’s environments can have different impacts (negative and positive) for different living things. (MS-ESS3-3)

©2005-2022 Sheri Amsel. All rights reserved.
The material on this site may not be reproduced, distributed, transmitted, cached or otherwise used for anything other than free educational use. It is not to be used for sale or profit of any kind. If you are unsure whether your use of site materials violates the exploringnature.org copyright, contact Sheri Amsel for prior written permission at sheri@exploringnature.org. Thank you for respecting copyright laws.
Site Developed by Eli Madden
Page ID: 6235
IP: 18.204.56.185