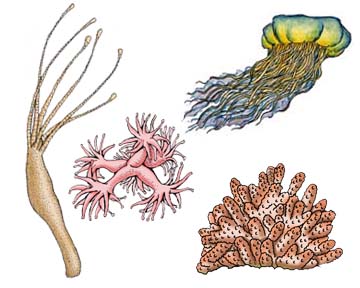 This Phylum has animals of many shapes and sizes and includes the jellyfish, hydra, sea anemones, and corals. Though these vary greatly, there are a few anatomical features  they all have in common.

• They are all "radially symmetrical" which means they can be cut in half from top to bottom around a central axis and the two sides would be roughly the same (like a pie).

• They all have an internal sac – the gastrovascular cavity for digestion with only one opening – a mouth through which food is taken in and waste is released.

• In each, the tentacles radiate outward from around the mouth.

Range and Habitat: They are all aquatic and mostly found in shallow coastal waters, though some are found in freshwater locations.

Physical Traits (Anatomy): They have 2 different body forms. Some species have both forms but one form is always dominant.

The “bell-shaped” form has the mouth facing downward and the animal contracts the bell to swim. The tentacles hang down and surround the mouth for pulling prey inside into the gastrovascular cavity for digestion. This body form is dominant in the adult true jellyfish, though they pass through a polyp phase as young.

The “polyp” form is usually anchored (sessile) with the mouth facing upward. Structurally, it is made up of a basal disc that attaches to the seabed and a cylindrical body stalk. Inside the body is the gastrovascular cavity. The mouth opens upward and is surrounded by tentacles. This is the dominant body form of the hydras, sea anemones and the corals. The Portuguese man-of-war is actually a gas-filled polyp that floats on the surface of the ocean trailing stinging polyps.

Cnidarians all have two cell layers – an outer protective epidermis and an inner gastrodermis. Between them is a jelly-like matrix called mesoglea. These layers surround an inner cavity called the gastrovascular cavity.

The epidermis layer is made up of many different types of cells. There are cells that contain muscles fibers (epitheliomuscular cells). These contract to allow the animal to move. Nerve cells make up a “nerve net” in the body that works with the muscle fibers to produce movement. There are also undifferentiated cells, called interstitial cells, that give rise to other cell types. Interstitial cells form eggs and sperm.

Interstitial cells also form cnidocytes in some species (like the jellyfish) which are special fluid-filled cells called “stinging cells.” Inside each stinging cell sits a spiral fiber, called a nematocyst, that is coiled and ready to spring. If a stinging cell is touched, it triggers the nematocyst, which instantly uncoils to catch prey. Some also inject a toxin that paralyzes prey. Then the tentacles around the mouth move the prey inside where it is digested. In some species the cnidocyte cells contain spirocysts that are sticky threads that are used to catch prey or stick to surfaces. These are common in corals and sea anemones. There are also ptychocysts cells in some species, which help the animal anchor to the seabed.

The inner gastrodermis layer makes and secretes digestive fluids into the gastrovascular cavity where food is broken down and digested.

Habits (Behavior): When threatened, they will use their stinging cells to repel predators.

Diet: Cnidarians are carnivores capturing prey as it drifts through their tentacles. Any contact triggers the discharge of stinging nematocysts that paralyze the prey. Then the tentacles will pull prey into the mouth and gastrovascular cavity. Once in the gastrovascular cavity, the gastrodermis cells secrete the digestive enzyme that breaks down the food. Waste is then ejected through the mouth with a sharp contraction of the body.

Reproduction: The reproductive process varies between the different cnidarians. In the class Scyphozoa (jellyfish) the fertilized gametes produce free-swimming larvae that swim away from the parent and embed on the sea floor. Here they grow into polyps. Each polyp can bud into a whole colony, which then releases the tiny medusa form that grows into an adult jellyfish.

In the class Anthozoa, the sea anemones stay as polyps their whole lives embedded to the sea floor. Eggs and sperm are released into the water resulting in a free-swimming larvae, which embed on the sea floor and develop into a polyps. Sea anemones can also bud asexually.

Another Anthozoa, the corals, have many forms. Most are stony corals, which form calcium carbonate skeletons in the shape of a protective cup. The coral polyp will pull into the cup to take shelter. Collectively the corals are the stratum for coral reefs. Other than the more common stony corals are some “soft corals” that take on more of a mound shape without the hard calcium carbonate skeletons.

Corals have a symbiotic relationship with an algae called zooxanthellae. Zooxanthella lives in the coral tissue itself, feeding the coral food and oxygen and taking up the carbon dioxide. Zooxanthella is what gives coral its many pretty colors. Zooxanthellae algae is very sensitive to pollution or water temperature changes. It will die and the coral loses its pretty colors. This is called coral bleaching. It is a sign of an unhealthy coral reef.
Coral is also killed by collectors. They harvest colorful corals and fish to sell to aquariums and shell trade markets. Visiting tourists, who go snorkeling on the reefs, walk on the fragile plants and animals. Boaters pollute the delicately balanced habitat. Our coral reefs are some of the most bio-diverse habitats left on Earth and need special protection.

To help students learn the anatomy of Cnidaria, print out a black and white version of the color diagram below: Anatomy of the Cnidaria. 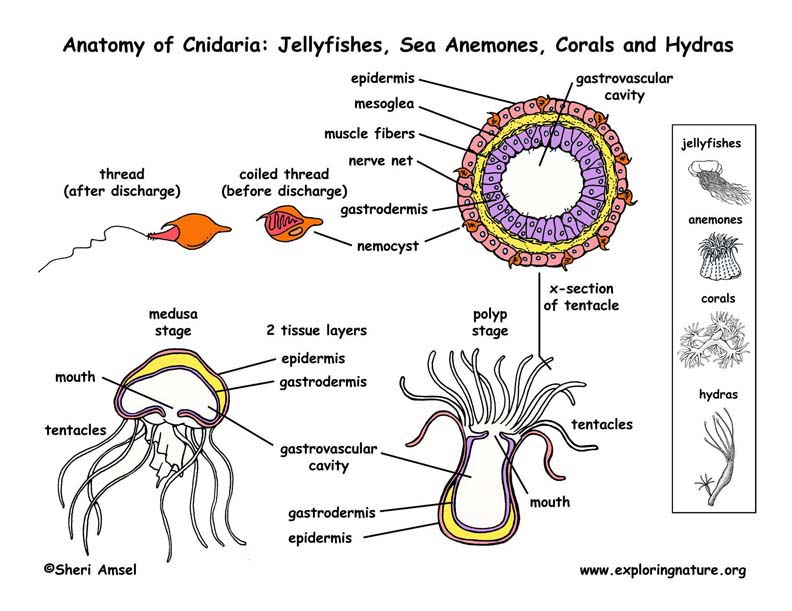 ©2005-2022 Sheri Amsel. All rights reserved.
The material on this site may not be reproduced, distributed, transmitted, cached or otherwise used for anything other than free educational use. It is not to be used for sale or profit of any kind. If you are unsure whether your use of site materials violates the exploringnature.org copyright, contact Sheri Amsel for prior written permission at sheri@exploringnature.org. Thank you for respecting copyright laws.
Site Developed by Eli Madden
Page ID: 1084
IP: 3.235.140.84