Although scientists made great progress early on in learning how cells used DNA to store and express information, by the mid 1970’s little was known about individual genes since there was no way to separate them from the genome.

DNA cloning solved this problem by giving scientists a way to separate out one gene, found in a huge mixed population of genes, and make many copies of it.

This is a typical cloning experiment:

The DNA Fragment has been cloned.

Who Invented this Technique?
In 1972, Cohen and Boyer, scientists from California, got together and recombined DNA from two different sources. They used plasmids as “cloning vectors,” took proteins, which could recognize specific DNA sequences and cut the strands to produce “sticky ends.” These ends could be joined to the other DNA molecules with the same ends. These proteins were called “restriction enzymes.” This method revolutionized the study of genes and ushered in the “Age of Molecular Biology.” Cohen and Boyer won the 1980 Nobel Prize in Chemistry for this ground-breaking research. 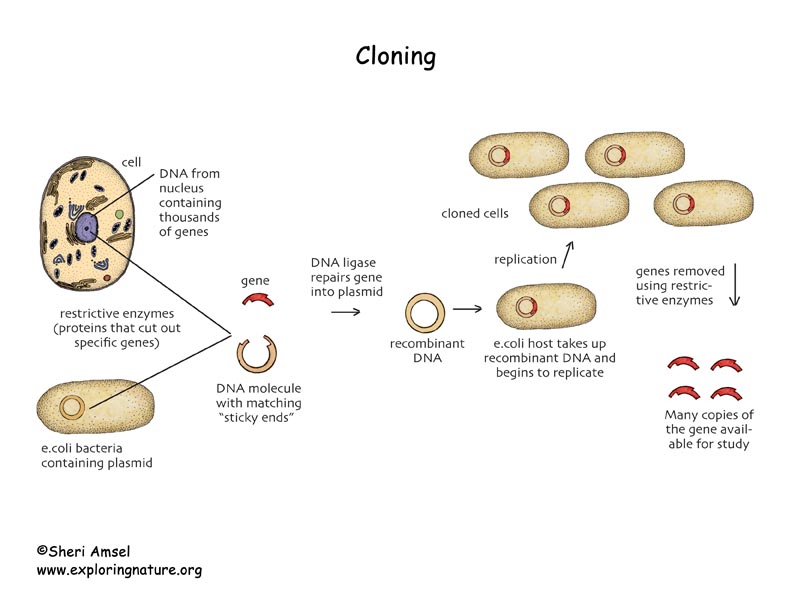 ©2005-2022 Sheri Amsel. All rights reserved.
The material on this site may not be reproduced, distributed, transmitted, cached or otherwise used for anything other than free educational use. It is not to be used for sale or profit of any kind. If you are unsure whether your use of site materials violates the exploringnature.org copyright, contact Sheri Amsel for prior written permission at sheri@exploringnature.org. Thank you for respecting copyright laws.
Site Developed by Eli Madden
Page ID: 1540
IP: 35.172.223.251