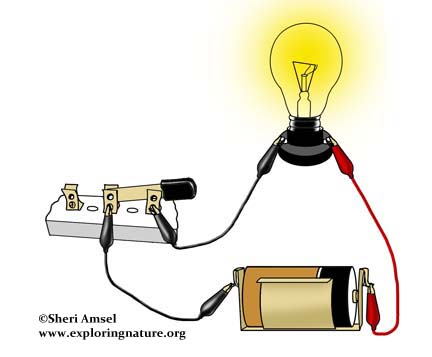 
Focus Questions:
1) What is electricity?
2) What is a conductor?
3) What is an insulator?
4) What is a circuit?
5) What is the difference between a series circuit and a paralle circuit?
6) What would be the disadvantage of wiring a whole house using a series circuit?
Introductory Exploration Activity (Assessing Prior Knowledge):
Electricity Word Merge - Students define ELECTRICITY, using their own words.
1. Write ELECTRICITY on the board and let students take turns writing what they think it means.
2. Also ask them to name something that uses electricity.
3. Discuss everyone’s thoughts about electricity and the devices that use it.
4. Encourage them to think about devices that use electricity that they may not expect, like the room clock, the morning announcements, the drink cooler, the lit exit signs, etc.

Objective: Demonstrate the behavior of an electrical current when it comes in contact with a conductor versus when it comes in contact with an insulator. For an electrical circuit
to work, it must be continuously conducted from the power
source to the device its powering. If the circuit is broken or
blocked by an insulator, the power cannot get through.

Procedures:
1. Have the students stand in a continuous line side-by-side.
Students will by putting their arms around each other’s shoulders.

2. The first person in line starts a wave by bending over and then standing back up.  This will sequentially pull everyone else in the line over too, simulating electricity flowing through a conductor.

4. Next students will simulate an insulator. Repeat the line of students with their arms around each other’s shoulders, but this time have one student in the middle drop their arms to their sides. They should still be next to the other students, but not linked to them. Again, the first person in the line bends over at the waist and stands up. What happens?

6. After completing your lesson on electricity and circuits, revisit this hypothesis with the students to see if their experiments with insulators and conductors confirmed or refuted their predictions. 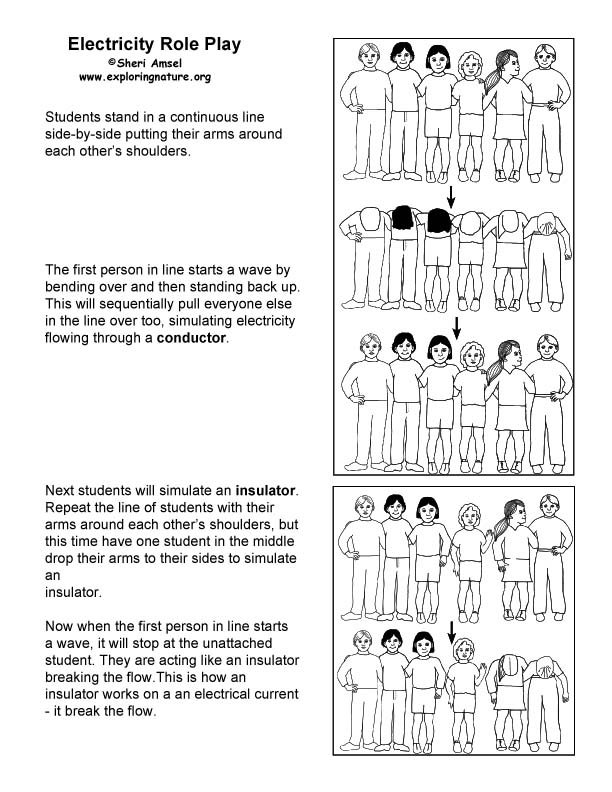 The word circuit literally means a route that starts and finishes at the same place. An electrical circuit has a source of power (the battery), the connecting wires (the conductors), and the device that is collecting the electrical power (the load). For the load to receive the electricity the circuit must be continuous. If the circuit is broken the power cannot get through to power the load.

In an electrical circuit, there needs to be a way to control when the power will flow through it and when it won’t. That is the job of the switch. A switch can be open or closed. A closed switch keeps the flow of electricity flowing through the circuit to power a device. An open switch creates a gap in the circuit, so electricity stops flowing to the device. It “breaks” the circuit. A switch can also be used to change the pathway of electricity in a parallel circuit to power a different devise.

Another way electrical current has been controlled is through fuses. A fuse will literally melt down if too much current is forced through it, creating a circuit gap – which stops he flow of electricity. This was meant to stop electrical fires, but requires replacing the burned out fuse with a
new one each time to get the current going again.

A newer current protection device is the breaker. A breaker or circuit breaker is a switch that is designed to activate and break the flow of electricity when too much current is flowing through the system to prevent an electrical fire. It can be reset by hand, so does not have to be replaced each time like a fuse.

Instead of simply stopping the flow of electricity, it is sometimes necessary to just decrease how much current a device is getting. This is done by resistor. A resistor can lower the current that is flowing into more fragile devices like a computer circuit board. 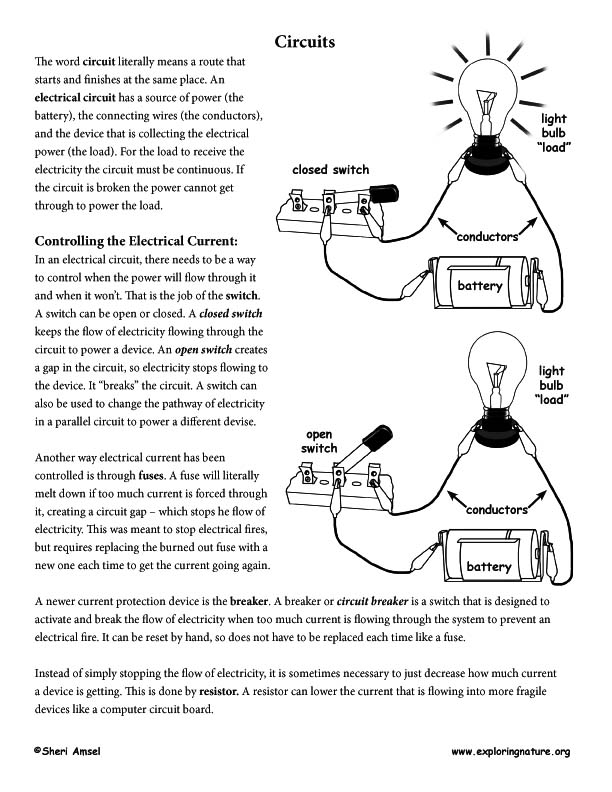 • A series circuit has more than one device (component loads) that are joined end-to-end by connecting wire (conducting wire). If there is a break anywhere in the wire (conductor), all the devices will lose power, because the circuit has been broken. 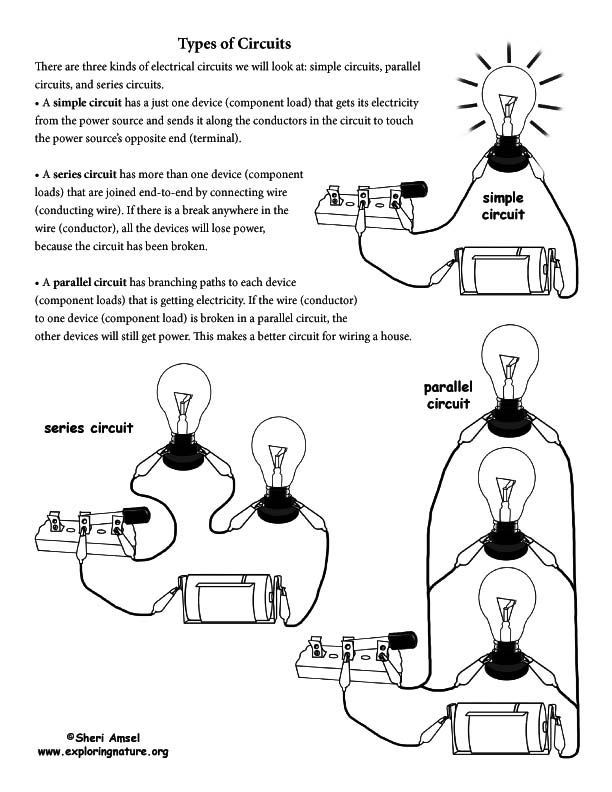 Goals:
1. Learn about the parts of a circuit.
2. Understand how the flow of electrical current moves between the power source and device and the role of the conductors.
3. Learn about which materials conduct electricty and which do not.

Directions:
1. Each group should layout their 4 strips of tinfoil in a square and fold the corners together (see diagram).

2. Using your scissors, cut the left side strip in the middle, fold up each end into a flap and fit the battery between the flaps. Tape the tin foil in place (see diagram).

3. Using the rubber band, secure the folded ends of the tin foil against the battery terminals at each end.

4. Now cut the bottom strip in the middle and fold up the flaps. This represents an open switch.

5. Now cut the right strip in the middle. Tape down the top end (see diagram).

7. Set the bulb onto the top end (see diagram).

8. Using your fingers pinch the two flaps of the bottom strip together. This will close the switch.

9. What happens? Explain this in terms of an active electrical circuit on the data sheet. (Data Sheet in PDF below.)

10. Connect the bottom flaps through each of the test conductors (penny, pencil, plastic pen, metal pen or spoon) and record whether they are conductors.

11. Label the Simple Circuit Diagram with the proper names of each part of the circuit. (Labeling Page in PDF below.) 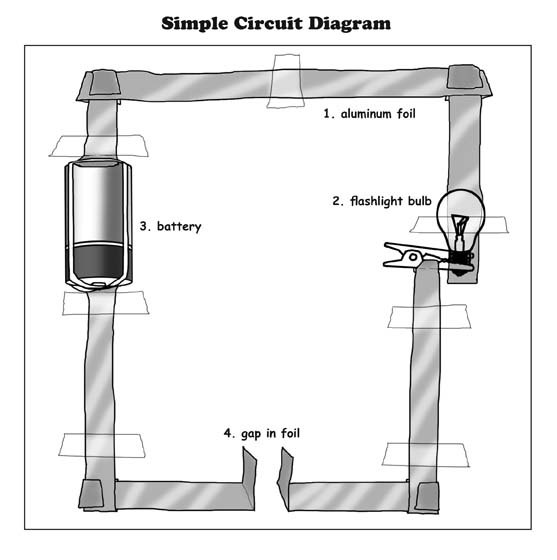 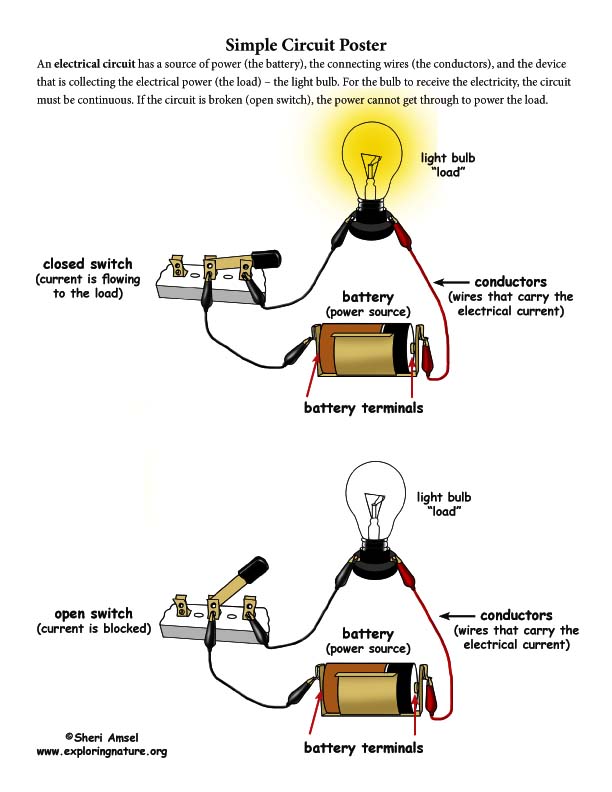 Test their knowledge of circuits with the:

©2005-2022 Sheri Amsel. All rights reserved.
The material on this site may not be reproduced, distributed, transmitted, cached or otherwise used for anything other than free educational use. It is not to be used for sale or profit of any kind. If you are unsure whether your use of site materials violates the exploringnature.org copyright, contact Sheri Amsel for prior written permission at sheri@exploringnature.org. Thank you for respecting copyright laws.
Site Developed by Eli Madden
Page ID: 1827
IP: 34.231.21.105