An ecosystem is made up of many populations of organisms living together with their non-living environment (water, air, rocks, etc.). Organisms adapt and evolve to survive within their ecosystems over time. Yet, ecosystems also change over time and the many populations living there must adapt to changes, move away, or die out.

The Arctic tundra is vast, treeless plain made up of wet, spongy muskeg that is frozen most of the year and covered by snow. Beyond it lies the Arctic Ocean overed in sea ice. The Arctic has populations of caribou, wolf, fox, hare, ptarmigan, polar bear, etc. Each species is adapted to its life in this extreme ecosystem.

The caribou has evolved large, hairy feet that help them stay up on top of the frozen snow pack when they travel. This uses less energy than breaking through the snow as they migrate across the tundra. It also allows them to run away from predators, like wolves, more effectively. Yet, the Arctic is changing fast due to global warming. The tundra does not stay frozen for as much of the year as it used to, making movement across it less effective for large caribou herds. They use up more energy walking across the wet, spongy ground and cannot run as effectively from wolves.

Another tundra species is the Arctic hare. It’s grayish-brown body turns white in winter. This helps it blend in with the snow, hiding them from predators. Furthest north, Arctic hares stay white year round. As the world warms, the brownish-green mat of the Arctic tundra is exposed for longer and longer every year.  A white Arctic hare stands out like a beacon on exposed tundra. This makes them much more vulnerable to predators hunting them.

Polar bears hunt for seals out on the Arctic sea ice. Historically, they are dependent on stable ice to reach open water to hunt seals. As the sea ice declines with climate change, the bears have become more vulnerable to starvation, becoming stranded out on break away ice, and drowning. Bears with low body weight also produce fewer young. All these factors together has led to a worrisome decline in polar bear populations.

How will these populations of animals adapt to the changing characteristcis of their ecosystems as a result of global climate change? Will they adapt, leave the area, or simply die out? Do some reseach and comment. 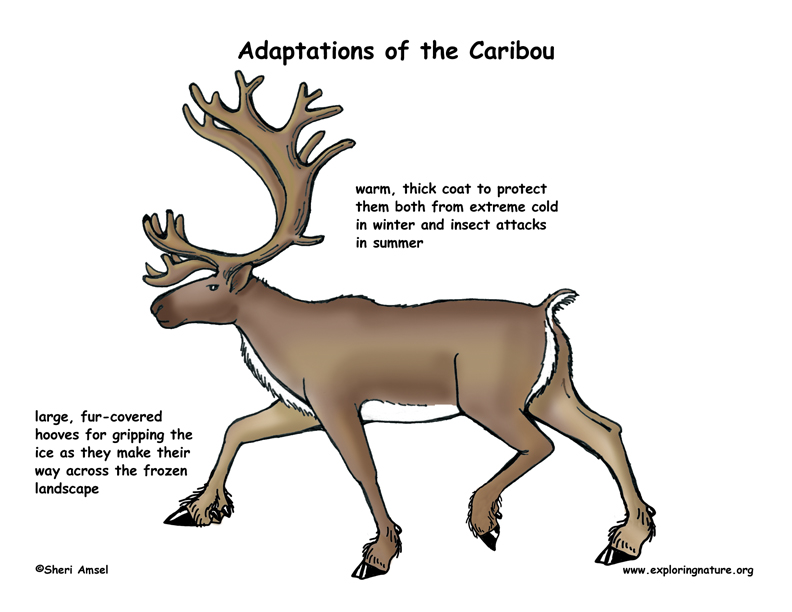 LS2.C: Ecosystem Dynamics, Functioning, and Resilience - Ecosystems are dynamic in nature; their characteristics can vary over time. Disruptions to any physical or biological component of an ecosystem can lead to shifts in all its populations. (MS-LS2-4)

©2005-2022 Sheri Amsel. All rights reserved.
The material on this site may not be reproduced, distributed, transmitted, cached or otherwise used for anything other than free educational use. It is not to be used for sale or profit of any kind. If you are unsure whether your use of site materials violates the exploringnature.org copyright, contact Sheri Amsel for prior written permission at sheri@exploringnature.org. Thank you for respecting copyright laws.
Site Developed by Eli Madden
Page ID: 6175
IP: 3.236.225.157