Blood is the only fluid tissue. It is connective tissue, made of formed elements (living blood cells - 45% of blood) and plasma (a non-living fluid matrix making up 55% of blood). There are no collagen or elastic fibers in blood, but during clotting fibrous strands appear. Blood accounts for about 8% of the body weight. A normal adult male may have about 5-6 liters (170-200 ounces) of blood. Adult females, depending upon their size may have 4-5 liters (135-170 ounces) of blood.

The overall functions of blood are substance distribution and body protection. Specifically:
1) Oxygen delivery from the lungs to the cells.
2) Nutrient delivery from the digestive tract to the cells.
3) Metabolic waste transport from cells to lungs (CO2), from the kidneys out urinary tract (nitrogenous waste).
4) Hormone transport from the endocrine organs to their target organs.
5) Body temperature maintenance by absorption and distribution of body heat.
6) pH maintenance as blood solutes act as buffers to sudden pH changes.
7) Fluid volume maintenance of circulatory system (salts, e.g. NA+CL– prevent fluid loss).
8) Blood clotting which prevents blood loss.
9) Infection protection - antibodies in blood and WBCs defend against bacteria, virus toxins and tumor cells. 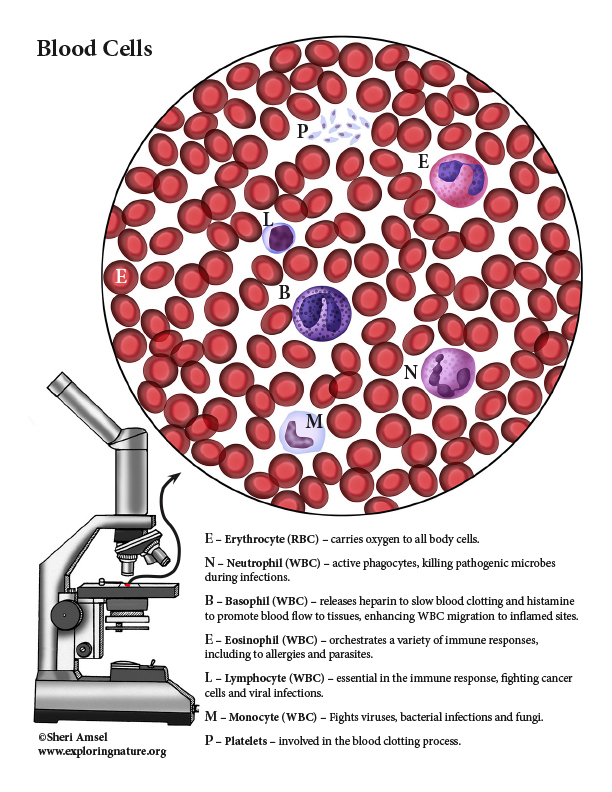 When blood is spun out in a centrifuge, the formed elements, which are heavier, collect at the bottom. The red blood cells are heaviest at the bottom of the test tube. They form 45% of the blood.

Then there is a tiny light colored layer of white blood cells and platelets called the buffy layer making up less than 1% of the blood.

The top 55% of the text tube is filled with plasma. 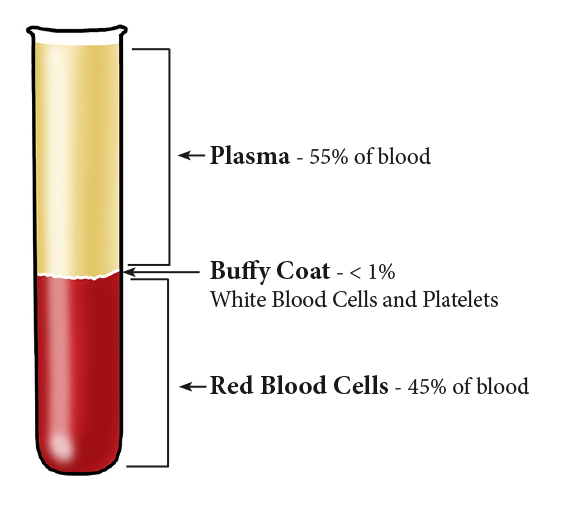 Plasma
1. Plasma is 55% of blood volume.
2. Plasma is 90% water and the rest is dissolved solutes: nutrients, gases, hormones, wastes, ions, proteins.
3. Plasma proteins are the most abundant solute (8%) produced by the liver. They are NOT taken up by cells to be used like glucose, fatty acids and oxygen. The plasma protein albumin makes up 60% of plasma proteins. Albumin is an important blood buffer that, along with sodium, helps to maintain plasma osmotic pressure.
7. Plasma helps distribute body heat.
8. Plasma, as part of blood, helps transport things around the body.

The Formed Elements of the Blood (Blood Cells):
The formed elements of the blood (blood cells) are formed in red bone marrow and are suspended in the plasma. They can be broken down into:
1) Red Blood Cells (RBC), also called erythrocytes. Their job is to transport oxygen. They make up 45% of blood. The RBC part of the blood is called the hematocrit.
2) White Blood Cells (WBC), also called leukocytes. Their job is to protect the body. (buffy coat) <1%
3) Platelets. These cell fragments have a role in blood clotting. <1%

l. Red Blood Cells (RBC) or Erythrocytes
1. Function to carry oxygen to all body cells.
2. RBCs are made up of 33% hemoglobin molecules – a protein that binds oxygen.
3. Hemoglobin is made up of the protein globin bound to the red pigment heme with iron molecules.
4. Each RBC has 250 million hemoglobin molecules and carries 1 billion oxygen molecules.
5. RBCs have no organelles - they generate ATP anaerobically (so they don’t use the O2 they carry).
6. RBCs are shaped like concave disks (depressed centers) which increases surface area for more O2 transfer.
7. RBCs are flexible so they can fit through capillaries that are smaller than they are.
8. RBCs are flexible due to a fibrous protein on their plasma membrane called Spectrin.
9. Spectrin also allows RBCs to group in stacks called Rouleaux Formation in slow-moving blood.
10. RBCs give blood its viscosity (stickiness) - the more RBCs the stickier the blood.
11. RBCs are anucleate (no nucleus), so cannot make proteins, grow or divide.
12. As they age, RBCs become rigid and fragile (they live about 100-120 days).
13. Dying RBCs become trapped, damaged and absorbed by phagocytes (often in the spleen). Their hemoglobin degrades into bilirubin (a yellow pigment secreted in the bile by the liver). The released iron is recycled by combining with a protein and being stored.

RBCs Role in the Process of Gas Exchange in the Body:
1. Oxygen diffuses from the air sacs (alveoli) in the lungs into the RBCs (erythrocytes).
2. Oxygen binds to the iron in hemoglobin and forms oxyhemoglobin (now it is bright red).
3. Once tissues have received oxygen, the hemoglobin becomes deoxyhemoglobin (now it is dark red again).
4. Only 20% of carbon dioxide is transported in the blood. It binds to the globin part of hemoglobin forming carbamino hemoglobin.
5. CO2 is then transported back to the lungs where it will be exhales out of the body.
6. The rest of CO2 is transported via the plasma - 10% dissolved and 60-70% as bicarbonate ions.

ll. White Blood Cells (WBC) or Leukocytes:
1. Less numerous than RBCs with 4 - 11,000 WBC per/cubic mm. Makes up only 1% of total blood volume.
2. Are crucial to the body’s defense.
3. Are the only formed elements in the blood that are complete cells with organelles.
4. Can slip in and out of blood vessels (diapedesis), to get to injured or invaded areas to start immune response.
5. Move in tissues with ameboid action responding to chemical release by damaged cells - positive chemotaxis.
6. When WBC mobilization is stimulated, the body speeds up WBC production - so an increase in WBCs indicates infection. A WBC count over 11,000 is called leukocytosis and indicates a viral or bacterial invasion.
7. Five types of WBCs (leukocytes), listed by their abundance in bloodstream: Neutrophils, Basophils, Eosinophils, Lymphocytes, Monocytes. They broken down into two major groups: granulocytes (contain granules) and  agranulocytes.
Granulocyte WBCs have lobed nuclei, are larger than RBCs, are full of granules, are phagocytes. They include: neutrophils, basophils, eosinophils

Basophils:
1. The least number of WBCs (less than 1%)
2. Have u-shaped or s-shaped nucleus with 2-3 constrictions in them.
3. Granules contain histamine that acts as a vasodilator and attracts other WBCs to the
site of infection.
4. Contain heparin to prevent blood clotting too quickly and histamine which acts as a
vasodilator to promote blood flow to tissues and enhancing WBC migration to inflamed sites.

Eosinophils:
1. 1-4% of WBCs.
2. They are large (size of neutrophils) with bi-lobed nucleus with large, coarse granules.
3. Their function is multi-faceted, from responding to parasitic infections and allergic
reactions to regulating lymphocyte recruitment to inflammation. It is now believed that
they are involved in orchestrating a variety of immune responses. As reserach goes on,
more of their roles in immunity will come to light.
Agranulocyte WBCs have no cytoplasmic granules, are formed in bone marrow, migrates to lymphatic tissue and reproduces there. They include: lymphocytes and monocytes

Lymphocytes:
1. About the size of RBCs.
2. Large nucleus takes up the whole cell.
3. Only a small portion of them are in the bloodstream.
4. Found mostly in lymphoid tissue (lymph nodes and spleen).
5. There are three types: T cells, B cells and killer cells.
T-lymphocytes (T cells) function in the immune response by acting against virus-infected cells and tumor cells.
B-lymphocytes (B cells) give rise to plasma cells, which produce antibodies called immunoglobulins that are released in the blood.
Killer calls (NK cells) act against cancer cells and virus-infected cells.

lll. Platelets
1. Their formation is unusual in that a huge multinucleate cell forms (called a megakaryocyte) and then splits.
2. Platelets are essential for the clotting process.
3. They clump together at a damaged site and form a temporary plug.
4. Platelets are sometimes called thrombocytes.
5. Platelets only last a few days because they are anucleate.
6. Their production is regulated by thrombopoietin H.

©2005-2022 Sheri Amsel. All rights reserved.
The material on this site may not be reproduced, distributed, transmitted, cached or otherwise used for anything other than free educational use. It is not to be used for sale or profit of any kind. If you are unsure whether your use of site materials violates the exploringnature.org copyright, contact Sheri Amsel for prior written permission at sheri@exploringnature.org. Thank you for respecting copyright laws.
Site Developed by Eli Madden
Page ID: 5925
IP: 18.204.56.185