Habitats are found in different locations around the planet depending on the temperature and rainfall. The most biodiversity is found in warm, wet habitats - closer to the equator. The habitats with the most biodiversity are thought to be tropical rainforests and coral reefs. The warm, wet environment is good for a large variety of living things, including plants, animals, fungi, and microorganisms. A diverse biological community, which has many different populations of organisms, helps keep an ecosystem healthy with stable food webs and the ability to survive changes in their habitat.

Biodiversity is important to humans for many reasons. We harvest resources from wild habitats, such as lumber for construction and fuel, plants for making medicines, fishing, hunting, and the collection other wild products that can be sold. Biodiversity helps ecosystems survive changing temperatures and rainfall resulting from climate change. In fact, healthy, diverse forests absorb greenhouse gases created by human industry – which causes climate change. Healthy coastal habitats protect us from storm surges and flooding. Millions of people from around the world visit wild habitats every year for recreation as well. Healthy, stable ecosystems are important to humans as well as the wild creatures that live there. Biodiversity is part of a healthy planet.

Over time, most ecosystems change. Some change through a natural process of succession, as plants grow up and give way to more mature species. Some changes result from weather events, such as volcanoes, hurricanes, windstorms or mudslides.  As the human population grows, most ecosystems have been affected by our development, agriculture, and recreational use of land and waterways. Some examples follow.

Ecosystem changes resulting from human actions include deforestation, where millions of acres of rainforest are cut down or burned for agriculture or lumber or to make room for human development. This has displaced countless animals, driving some, such as tigers, gorillas, chimpanzees and many birds species, to the brink of extinction.

Humans have also caused desertification from allowing livestock to overgraze grasslands or diverting water to farms and cities. As the grasslands change to desert, whole herds of wildlife (elephants, zebra, gazelles, giraffes, wildebeests, etc.) are forced to find new sources of food and water, traveling further and further from their normal migration routes.

Humans have caused coral bleaching, a symptom of damaged and dying coral reefs, from pollution, physical damage from tourism, and over-collection of animals.

We have over-fished whole areas of the ocean disrupting marine food webs. Ocean pollution (especially of plastic waste) has become a global crisis as sea animals become tangled and drown or choke on the growing mass of floating waste.

Industrial emissions from smokestacks release so much carbon and nitrogen into the atmosphere that it mixes with rain water and falls as acid rain on ecosystems downwind. Acid rain stunts the growth of trees and kills fish, frogs and other aquatic life.

Physical development of wild lands for agriculture and housing has resulted in extensive habitat loss in every ecosystem on Earth. While some animals can adapt to ecosystem changes and even thrive in urban areas, such as raccoons, opossums, pigeons, falcons, rats, and squirrels, many animals will disappear.

In agriculture, biodiversity may protect mankind from future famines. In a hungry, crowded world, industrial agriculture tends to grow single crops that are genetically uniform. This practice is called monoculture and makes for easier, more effective planting and harvesting with saves farmers money and increases their yield. Unfortunately, as with a wild ecosystem, the lack of biodiversity in agriculture can lead to serious problems. It increases the crop’s vulnerability to pests and diseases. With no agricultural biodiversity, a whole crop can be wiped out. This is not as much of a problem now with so many food sources available, but in the past and in less developed countries, it can be a disaster. In 1852, when a fungus attacked the potato crop in Ireland, it was the only food crop that most areas had grown. This disaster was called the Irish potato famine and over the next seven years, over a million people starved to death and a million more left Ireland. A biodiverse crop can protects us this kind of disaster in the future. 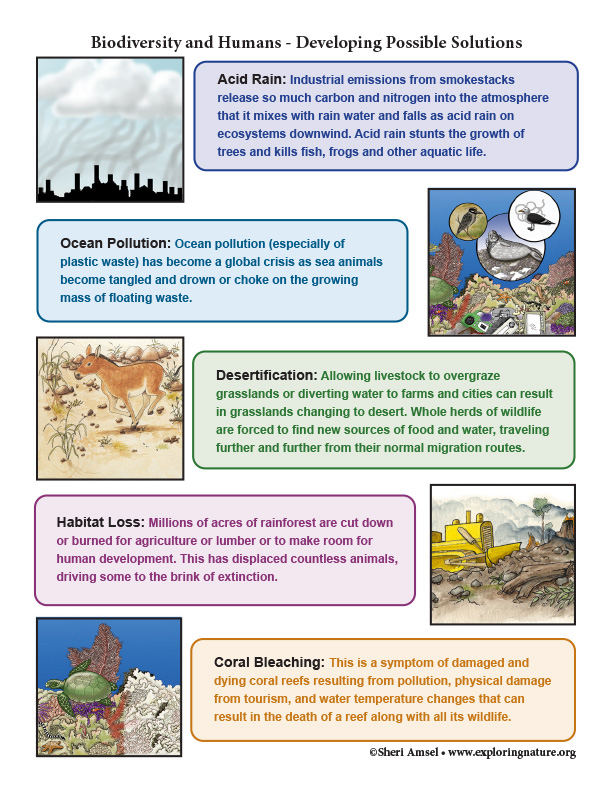 LS2.C: Ecosystem Dynamics, Functioning, and Resilience – Biodiversity describes the variety of species found in Earth’s terrestrial and oceanic ecosystems. The completeness or integrity of an ecosystem’s biodiversity is often used as a measure of its health. (MS-LS2-5)

LS4.D: Biodiversity and Humans – Changes in biodiversity can influence humans’ resources, such as food, energy, and medicines, as well as ecosystem services that humans rely on—for example, water purification and recycling. (secondary to MS-LS2-5)

©2005-2022 Sheri Amsel. All rights reserved.
The material on this site may not be reproduced, distributed, transmitted, cached or otherwise used for anything other than free educational use. It is not to be used for sale or profit of any kind. If you are unsure whether your use of site materials violates the exploringnature.org copyright, contact Sheri Amsel for prior written permission at sheri@exploringnature.org. Thank you for respecting copyright laws.
Site Developed by Eli Madden
Page ID: 6172
IP: 3.238.225.8