l. Biodiversity and Humans
Biodiversity is the rich variability among living organisms. This includes organisms that live in all ecosystems - on land, in the ocean, in freshwater habitats, underground, and even those managed by humans – agricultural crops, nature preserves, national and urban parks.

Biodiversity is important for many reasons:
1) A diverse biological community helps keep an ecosystem healthy with stable populations, food webs and the ability to survive changes.
2) Stable ecosystems benefit humans as they provide resources that have a financial value – foods, medicines, energy, recreation, and tourism.
3) Biologically, diverse, stable habitats also benefit humans with what some scientists call ecological services. These are not easy to put a price tag on, but without them humans cannot survive on Earth. They include nutrient cycling, soil development, decomposition, oxygen production, carbon dioxide absorption, and carbon storage, among other things. The more biodiversity in an ecosystem, the more ecological services it provides. Losing these ecological services will eventually affect humans in ways we cannot ignore.

There are many threats to biodiversity created by humans (anthropogenic changes). As our population grows, we see an increase in habitat destruction, over harvesting of habitat resources, overfishing of marine and freshwater fisheries, an increase in tourism – which can lead to habitat damage, introduction of invasive species which can out compete native species, an increase in pollution, and over all growing climate change. Humans are working to develop ways to address these issues in their communities and around the world to preserve a rich, vital, and healthy planet for generations to come. One way to play a role in this important process is to understand biodiversity, the reasons it is important, the things that threaten it, and the ways we can try to mitigate it over time.

Species Diversity
Biodiversity is the number of different species in a biological community – which can be as small as the organisms living in a single tree or a whole forest biome. This is also referred to as species richness.

Rainforests have always been held up as the ecosystem with the most species diversity, though not all the species have even been identified yet in these rich habitats. In addition, through photosynthesis, rainforests absorb massive amounts of carbon dioxide, which helps  offset the effects of climate change, and release lots of oxygen that circulates around the planet. Scientists estimate that rainforests provide between 10-20% of all the oxygen on Earth. Like a great green sponge, rainforests also absorb and release water, keeping the local climates moist with regular precipitation and healthy aquifers. The regular cycling and decomposition of leaves and other organic matter keeps the soil rich and healthy for the continued growth of massive trees. Rainforests are a great resource for foods, medicines, and timber. These are just some of the rainforests’ huge value in ecological services to humans.

Sadly, rainforests are also experiencing the fastest growing destruction of any habitat - so called anthropogenic changes. They are harvested for wood and other resources or simply burned and converted into agricultural land. In 2019, scientists identified more than 74,000 fires burning in the Amazon Rainforests of South America. As the rainforests burn, the regions loses it ability to absorb carbon dioxide and instead is adding more carbon to the atmosphere - increasing greenhouse gases instead of helping to counter it. In addition, the moisture holding affect of the forests is lost and the region becomes drier, which increases the likelihood of more fires.

Habitat loss has a major affect on biodiversity and species richness and it’s not just rainforests that are affected. Habitats of all kinds around the world are being destroyed as our world population grows. Plowed and developed prairies, drained wetlands, and clearcut forests leave only small isolated pieces of natural communities that can’t support healthy, stable populations. This puts them at huge risk, because they lack the rich biodiversity of species that create the healthy, complex, organization of a working ecosystem. Reducing the impacts of human activities on the environment and on biodiversity will become more vital over time as our population continues to rise, world resources dwindle, and climate change increases. 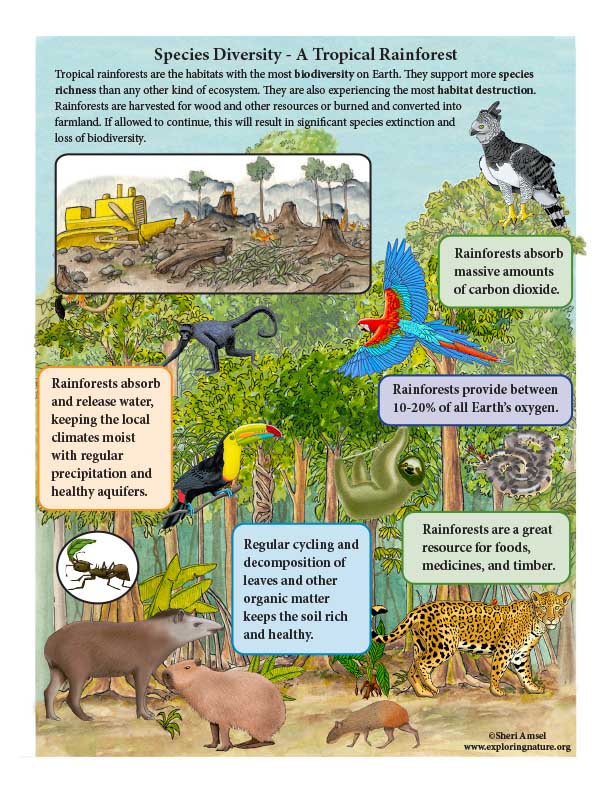 For example, a herd of caribou is a population of animals that are all the same species, but have some genetic variability. This variation may show up in the form of various traits, such as longer legs (that might help them escape from predators), larger antlers (to defend themselves from predators and compete for a mate), bigger, hairier feet (that would help them save energy by being able to run across the snow without breaking through) or thicker fur (to help stay warm). Any of these traits might lead to a longer life.

If a trait helps an animal survive, it is called an adaptive trait. Adaptive traits can help an animal find food, make a safer home, escape predators, survive cold, heat or lack of water. A caribou with a longer life can produce more young over its lifetime. Some of their helpful adaptive traits are passed onto their young. These are called inheritable traits and will help their young survive and have more young of their own. Over time, more and more of the caribou in this population will inherit these adaptive traits. This is called differential reproduction.

Changes in a population through differential reproduction, which helps the group survive, is an example of natural selection. Natural selection can lead to the adaptive traits showing up in more and more of a population as time goes by, making the herd stronger and increasing its chance of survival over time. This is the powerful result of genetic variability.

Natural selection can also lead to speciation. For example, if one group of caribou got separated from the herd (e.g. on an island), over thousands of years, natural selection might result in so many changes that they develop into a new species. This is called speciation. Speciation takes a long time and is much less common than extinction. 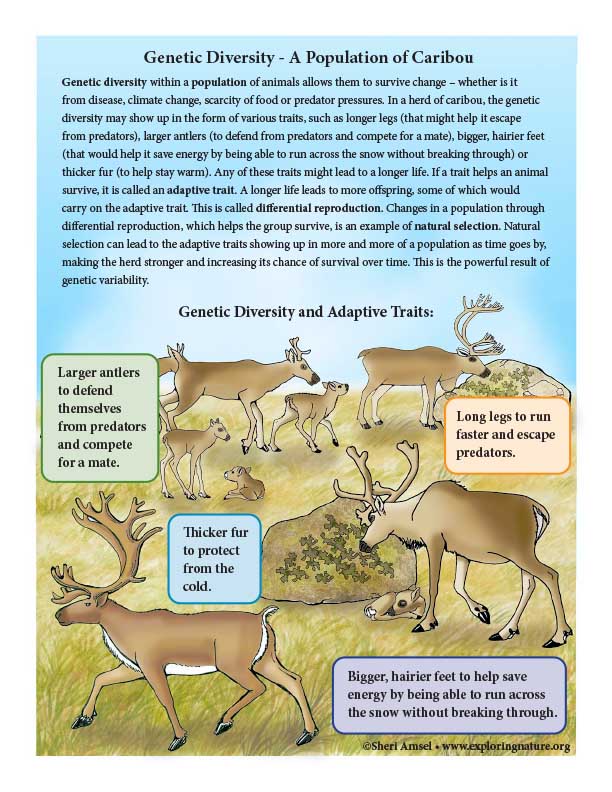 lll. Ecosystem Diversity
The variability and distribution of species throughout a whole ecosystem is genetic richness on a larger scale. This kind of biodiversity is harder to measure as it is affected by:
a) how many different communities are in the area – a community is many different populations of species living in one area and interacting with each other and the physical environment,
b) how big they are,
c) their distribution, and
d) how they are interacting with each other.

Many of the different populations of organisms in a community affect each other in ways that might not be readily apparent. Losing one species may well affect the other populations in the community. For example, The American alligator, found in freshwater habitats of the southeastern U.S., was once thought to be a dangerous pest. Fishermen thought they were eating all the game fish. They were hunted so aggressively, that by 1965, they became an endangered species on the verge of extinction. Then, as the alligators disappeared, people began to notice that instead of better fishing, all the game fish were disappearing. Biologists confirmed that the alligators’ favorite prey, a large fish, called a gar, had been having a population boom. With no alligators to eat them, the gar numbers were rising and they were eating all the game fish. The loss of the alligator had changed the delicate balance of that ecosystem. Biologists call the American alligator a keystone species, because it has a major influence in balancing its ecosystem’s biodiversity.

Ecosystem diversity also takes into account the physical environment. When wolves were reintroduced into Yellowstone Park, they reduced the elk population, which had overpopulated the park and eaten back all the willow, aspen and cottonwoods. The wolves also kept the elk herds moving so they could not over browse any one area. In just a few years, the trees came back and then the beaver returned. The beavers created dams and changed the waterways. This created habitat for more fish, waterfowl, songbirds and other animals. In a relatively short period, Yellowstone Park’s physical environment had changed, its ecosystems had become more robust and the biodiversity had increased. Reintroducing apex predators, like the Yellowstone wolves, to restore sustainable diversity to an ecosystem is called rewilding. See the Rewilding Yellowstone Worksheet - Ecosystem Diversity Critical Thinking to create a 2D model of this successful example of biodoversity recovery. 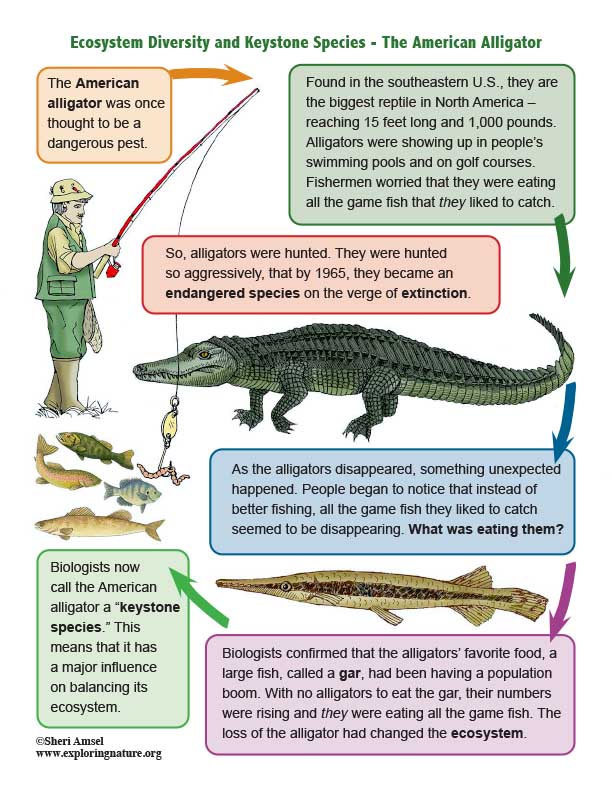 ©2005-2022 Sheri Amsel. All rights reserved.
The material on this site may not be reproduced, distributed, transmitted, cached or otherwise used for anything other than free educational use. It is not to be used for sale or profit of any kind. If you are unsure whether your use of site materials violates the exploringnature.org copyright, contact Sheri Amsel for prior written permission at sheri@exploringnature.org. Thank you for respecting copyright laws.
Site Developed by Eli Madden
Page ID: 6098
IP: 3.238.225.8