“Changes in the physical environment, whether naturally occurring or human induced, can contribute to the expansion of some species, the emergence of new distinct species, and the decline–and sometimes the extinction–of some species. Species become extinct because they can no longer survive and reproduce in their altered environment.”

There are many examples of this that can be explored. One interesting example involves several populations of the small, insect-eating bats in the Northeastern United States.

There may always have been small populations of insect-eating bats in the Adirondack Mountains of Upstate New York. Lacking caves as natural winter hibernation sites in the region, the bats may have migrated into the area during the spring and summer to feed on the abundance of seasonal flying insects. There may also have been a number of bats that were able to hibernate in attics, seasonal dwellings closed up for winter, or even deep rock crevices.

Then in the mid-1800s, people began mining in upstate New York. Between 1880 and 1918, twenty-three million tons of iron ore were mined in New York, mostly in the Adirondack region. From 1938 to 1945, another eight million tons of ore were taken from mines Upstate alone. When the mines were closed, some as late as the 1980s, they left what was essentially a massive underground cave system in which bats could hibernate.

With places to hibernate, bat populations in the region boomed to tens of thousands. Little brown bats, big brown bats, eastern pipistrelle, Indiana bats, hoary bats and other species made their homes in the old mines. Every spring, when the mosquitoes and black flies emerged, so did the bats, feeding from dusk through the night, using their unique echolocation to find their prey in the dark. Their appetite for bugs was no small thing. One bat can eat thousands of insects in one night and a group of 100 bats could eat millions of insects per year. In fact, researchers believe that bats have reduced farmers’ need for pesticides contributing as much as $50 billion a year to the American farming economy. For decades, these small populations of bats thrived in their man-made hibernaculums, helping farmers and quietly doing their part in the local food webs.

Then in 2006, researchers made a tragic discovery. Bats across the Northeastern U.S. and Canada began dying. A deadly fungus, accidentally introduced from Europe, was killing the bats. The fungus causes the bats to wake from hibernation early, before the spring supply of insects become available. With nothing to eat, they use up their stored energy and starve to death. With no natural resistance to the fungus, white-nose syndrome swept through hibernating bat populations killing 70-90% of all the bats. In the first ten years since the disease was discovered, more than 6 million bats died, driving some species close to extinction.

In Europe, where the fungus that causes white-nose syndrome has been documented for more than 100 years, the bats have developed an immunity. In the U.S. and Canada, the fungus was introduced to bat populations so suddenly that, so far, the survival rate has been very low. It is hoped that the bats will develop an immunity to the fungus over time, but with such a low survival rate, it is possible that some species may become extinct before they can adapt.

Read the essay titled, Little Bats - Adaptation and Changing Environments. Evaluate the evidence supporting the claim that changes in environmental conditions may result in (1) increases in the number of individuals of some species, (2) the emergence of new species over time, and (3) the extinction of other species.

Be sure to answer the following questions in your evaluation.
1) Which human induced change to the physical environment contributed to the expansion of some species? Explain the cause and effect of this change.

2) Which human induced change to the physical environment contributed to decline of some species? Explain the cause and effect of this change.

3) Explain why, so far, the bats have not be able adapt to the latest change in the environment (introduction of the fungus that causes white-nose syndrome) - therefore experience species’ evolution.

4) Will this potentially result in the extinction of one or more bat species?

5) Explain why bats in Europe have been able to adapt to this environmental change (fungus) and experience the necessary degree of species’ evolution to allow survival.

6) Describe how the extinction of these bat species may affect the environment in which they have lived.

7) Describe how the extinction of these bat species may affect the farming economy.

8) Do research online to identify and describe “additional evidence in the form of data, information, models, or other appropriate forms that was not provided but is relevant to the claims and to evaluating the given evidence, including:
i. Data indicating the change over time in: a) The number of individuals in each species; b) The number of species in an environment; and c) The environmental conditions.
ii. Environmental factors that can determine the ability of individuals in a species to survive and reproduce.” 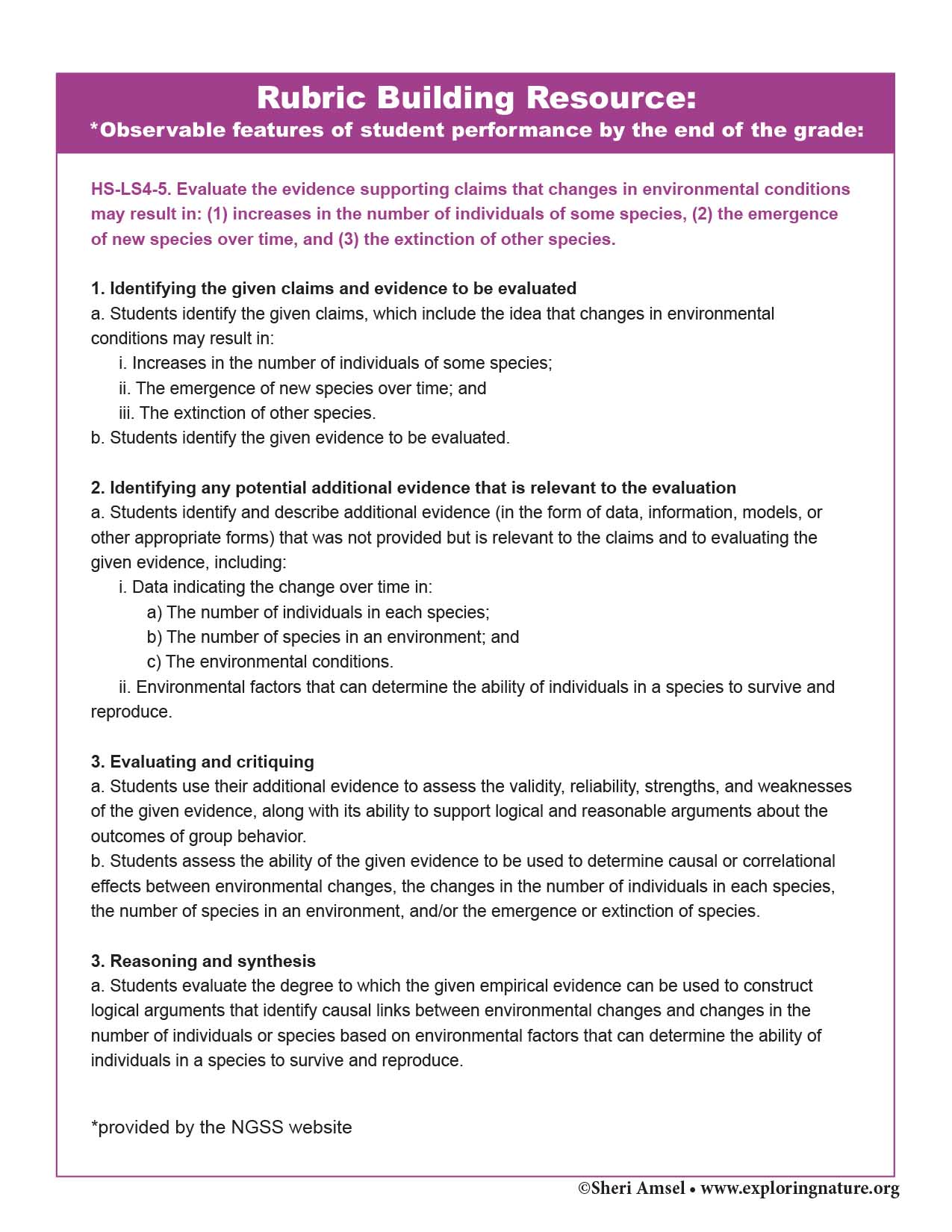 ©2005-2022 Sheri Amsel. All rights reserved.
The material on this site may not be reproduced, distributed, transmitted, cached or otherwise used for anything other than free educational use. It is not to be used for sale or profit of any kind. If you are unsure whether your use of site materials violates the exploringnature.org copyright, contact Sheri Amsel for prior written permission at sheri@exploringnature.org. Thank you for respecting copyright laws.
Site Developed by Eli Madden
Page ID: 6382
IP: 35.168.110.128