Even before humans understood what genetics was, they were breeding animals to increase the traits they wanted – such as better wool or more milk. During the Stone Age, more than 200,000 years ago, people hunted and gathered their own food and life was very hard. Then, about 10,000 years ago, humans began to grow their own food and domesticate animals. Communities of people could live in one place year round and store enough food to survive the winter.

Domesticating Farm Animals
Domesticated animals were often very different from their wild relatives. Humans bred animals for traits that helped them. Early cultures learned that they could breed different traits into their livestock that were passed onto their offspring – so they were inheritable traits. Animals helped with farm work and transportation. They could be eaten and made into clothes, tents, and water carriers. They were bred to grow fatter, have better wool, give more milk, have a placid temperament, be able to live and breed in captivity, survive adverse weather, and eat local grasses. Though aggressive behavior, speed, and a leaner body may have selective advantages in their wild cousins, the humans of the time could change those traits and behaviors through selective breeding.

When humans influence the characteristics of animals or plants by selective breeding, they are participating in artificial selection. Early breeders were seeing dominant genes showing traits more often and recessive genes showing traits less often – long before they knew what genes were.

Domesticating Crop Plants
Another example of artificial selection was in growing early grains. Einkorn was the first wild form of wheat. It was bred or crossed with different grasses over time to make the wheat we know today.

Early on, humans began cutting down wild wheat to harvest its seeds. The wild grains had seeds that would blow away in the wind, a trait that had a selective advantage to spread the plants’ offspring. When humans began harvesting these wild grains, they collected the seeds for planting the following year that had clung to the parent plant and not blown away – the clinging seeds. The genetic variability of this trait - how well the seeds clung to the parent plant, helped humans direct the natural selection and hence the domestication of modern wheat.

Planting only the clinging seeds in the following years resulted in more and more plants with seed heads that held onto their seeds. This was an inheritable trait. After many years of only collecting and replanting seeds that clung to the plant, the crop became dominated by clinging seeds. The wild grain was becoming domesticated through selective breeding. 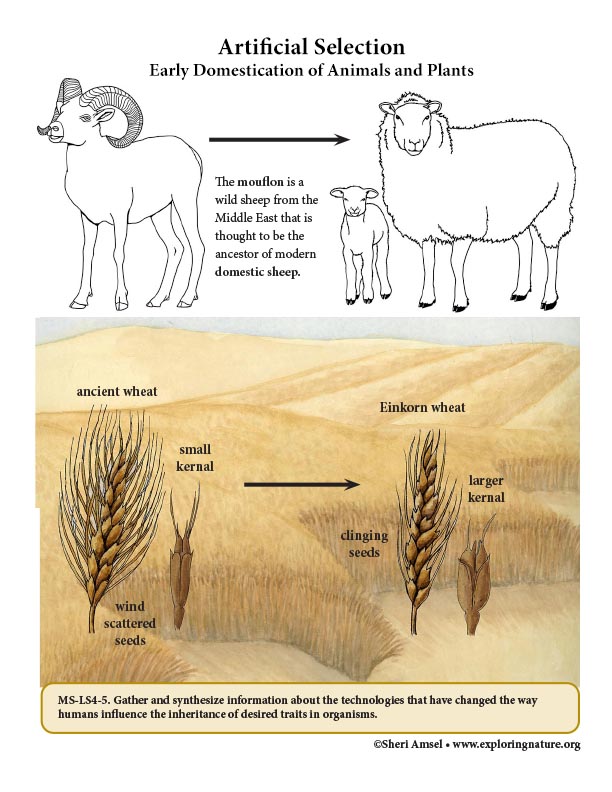 ©2005-2022 Sheri Amsel. All rights reserved.
The material on this site may not be reproduced, distributed, transmitted, cached or otherwise used for anything other than free educational use. It is not to be used for sale or profit of any kind. If you are unsure whether your use of site materials violates the exploringnature.org copyright, contact Sheri Amsel for prior written permission at sheri@exploringnature.org. Thank you for respecting copyright laws.
Site Developed by Eli Madden
Page ID: 6219
IP: 35.172.223.251