Arteries of the Lower Limb (Pelvis, Leg and Foot) (Advanced*) 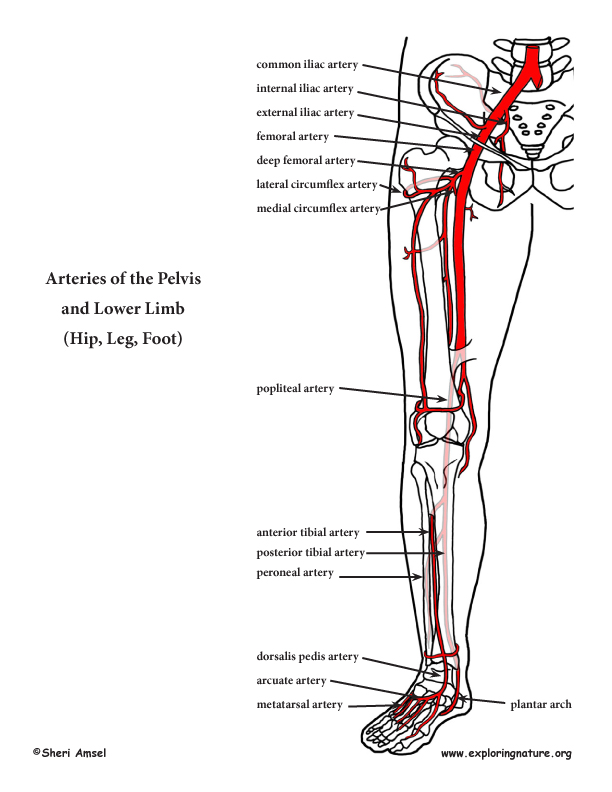 Arteries of the Pelvis and Lower Limb (Hip, Leg and Foot):

> external iliac arteries supply the lower limbs and give off branches into the pelvis muscles and skin of the inferior abdominal wall.

When the external iliac arteries pass under the inguinal ligament, they become the femoral arteries.

> femoral arteries run down the anterio-medial thigh and give off:

> deep femoral artery which supplies blood to the flexors of the thigh (postero-lateral thigh) and gives off:

> lateral and medial circumflex arteries that encircle and nourish the head of the femur.

> femoral arteries turn into popliteal arteries as they pass though the adductor hiatus and popliteal fossa behind the knee.

> popliteal artery anastomose around knee and supplies blood to the knee region then splits into anterior and posterior tibial arteries.

> anterior tibial artery (smaller of the two) runs through the anterior compartment of the leg and supplies blood to the extensor muscles.

At the ankle it becomes the dorsalis pedis artery which is the pedal pulse point.

> dorsalis pedis artery supplies blood to the ankle of dorsum (top) of foot. It then becomes the:

> arcuate artery which gives of the metatarsal arteries to the digits.

> posterior tibial artery (larger) runs through the posterior compartment of the leg supplying blood to the flexor muscles of the leg.

It gives off the:

> peroneal artery that supplies blood to the lateral peroneal muscles of the leg.

At the ankle it divides into:

> lateral and medial plantar arteries supply blood to plantar surface (bottom) of the foot and then form:

> the plantar arch which gives off the digital arteries.

Test your knowedge of the arteries of the upper limb with the labeling page. 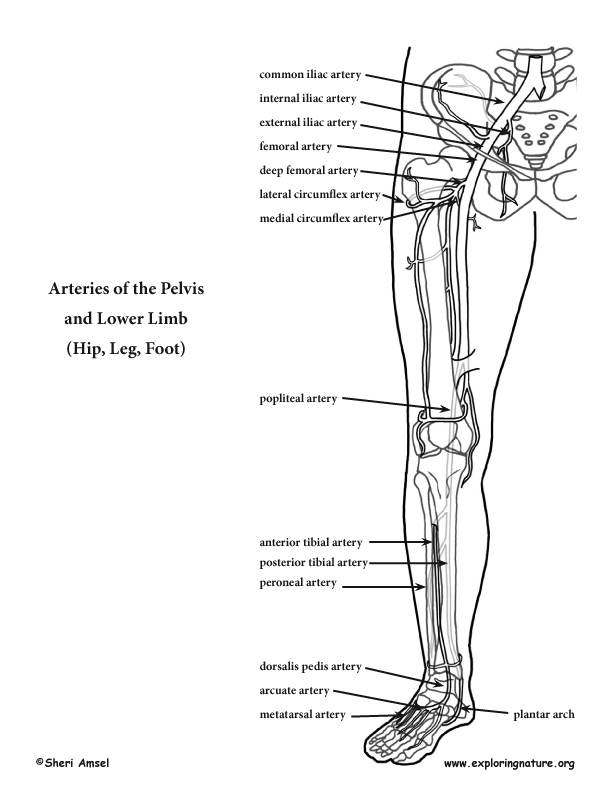 ©2005-2022 Sheri Amsel. All rights reserved.
The material on this site may not be reproduced, distributed, transmitted, cached or otherwise used for anything other than free educational use. It is not to be used for sale or profit of any kind. If you are unsure whether your use of site materials violates the exploringnature.org copyright, contact Sheri Amsel for prior written permission at sheri@exploringnature.org. Thank you for respecting copyright laws.
Site Developed by Eli Madden
Page ID: 4677
IP: 3.238.72.180