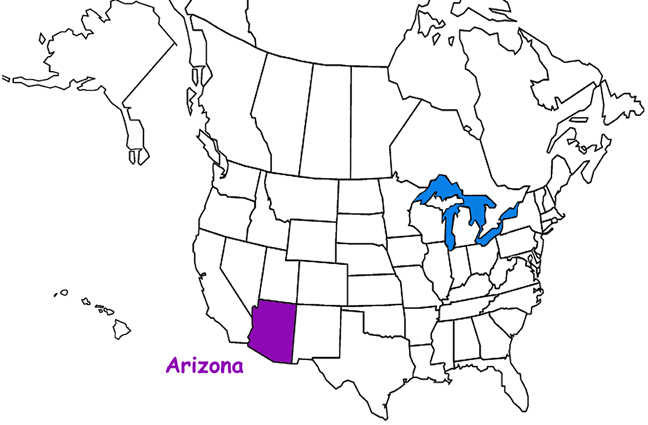 Arizona has a rich variety of habitats including desert, rugged mountains, forest, grassland, tundra, and even intermittent moist riparian areas along the Colorado River floodplain. Arizona is a dry state averaging just 12.5 inches of rainfall a year - a desert is defined as any region receiving less than 19.6 inches per year. The southwest corner of Arizona gets just three inches of rain yearly.

Arizona is the only state that has four distinct deserts - the Sonoran, Mohave, Chihuahuan, and Great Basin deserts. The Sonoran Desert is about 100,000 square miles (260,000 square km). It covers most of the southern half of Arizona. (It also covers southeastern California, most of the Baja peninsula, the Gulf of California islands, and a good portion of the Sonora state of Mexico.) It is not the driest of deserts and has some distinctive and interesting plant life including saguaro cactus, barrel cactus, mesquite, creosote bush, palo verde, flowering cacti, agave, claret cup cactus, sage brush, brittlebrush, and yucca.
The Sonoran Desert is an extreme habitat and sometimes experiences dangerous dust storms called haboobs caused by strong downburst winds created during powerful thunderstorms. Even huge cities, like Phoenix, can sometimes face these walls of blowing sand. All a person can do if caught in a haboob is to quickly find shelter, cover their eyes, nose and mouth, and stay low under cover.
Yet perhaps the extreme that most surprises and endangers people if the extreme shift in temperatures in the desert. The Sonoran Desert can reach 110°F during the daylight hours then at night drop almost to freezing. These variations mean that animals survive by taking shelter underground or inside vegetation when the temperatures are extreme.

Rising up to 8,000 feet out of the desert in southern Arizona are rugged mountain regions called sky islands. Their name describes their unique trait of rising out of a relatively barren desert landscape to provide habitat for a myriad of wildlife. Because of their changing altitude, the sky islands have a variety of habitats making them one of the most diverse ecosystems. Located in southeastern Arizona, southwestern New Mexico, and northwestern Mexico, these sky islands are thought to be home to half the bird species of North America, 29 bat species, over 3,000 species of plants, and 104 species of mammals.
These mountains have coniferous forests on their higher elevations and on the foothills and lower mountain slopes (and mountains east of the Sonoran Desert) are forests of oak, pine and other mixtures of coniferous forest and temperate deciduous forest trees. Temperate deciduous forests of aspen groves and narrow bands riparian trees are scattered around the state in areas moist enough for their growth. The Madrean evergreen woodland (or Mexican oak-pine woodland) is a warm-temperate forest of the Sierra Madre Occidental of northern Mexico that extends as far north as central Arizona.

On Arizona's highest mountains, like the San Francisco Peaks reaching 12,633 feet near Flagstaff, there is a tundra habitat. It is a strange quirk of nature that the tops of these snow-covered mountains are less than 50 miles from the saguaros on the floor of the Sonoran Desert.

Arizona's Grasslands are mostly the semidesert that sits between the deserts and Great Plains grassland.

In northern Arizona is the Colorado Plateau which is a high altitude (over a mile above sea level) mix of high desert and forest. It also hosts stunning windswept mesas and sandstone formations formed over millions of years by the eroding action of water, wind, and even ice on layers of sedimentary rocks. The Colorado Plateau includes the Grand Canyon, a mile-deep crevasse that winds 277 miles down the Colorado River. 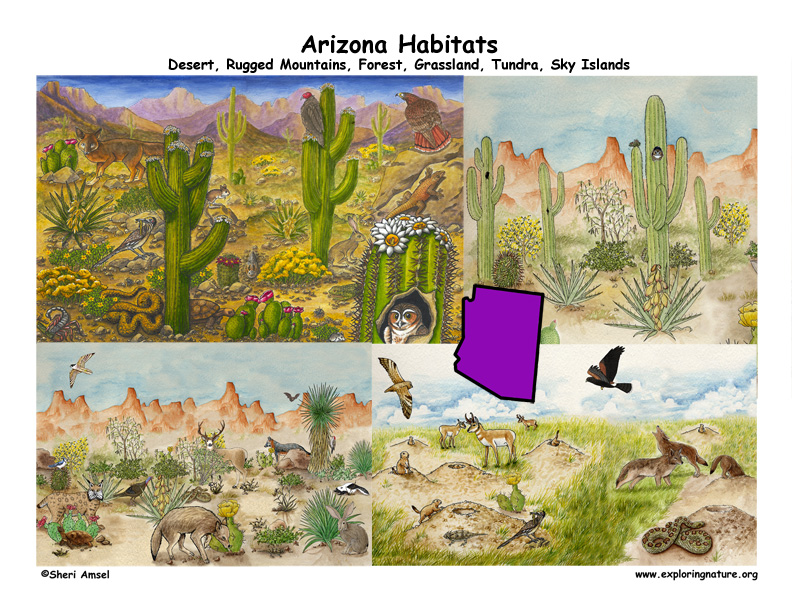 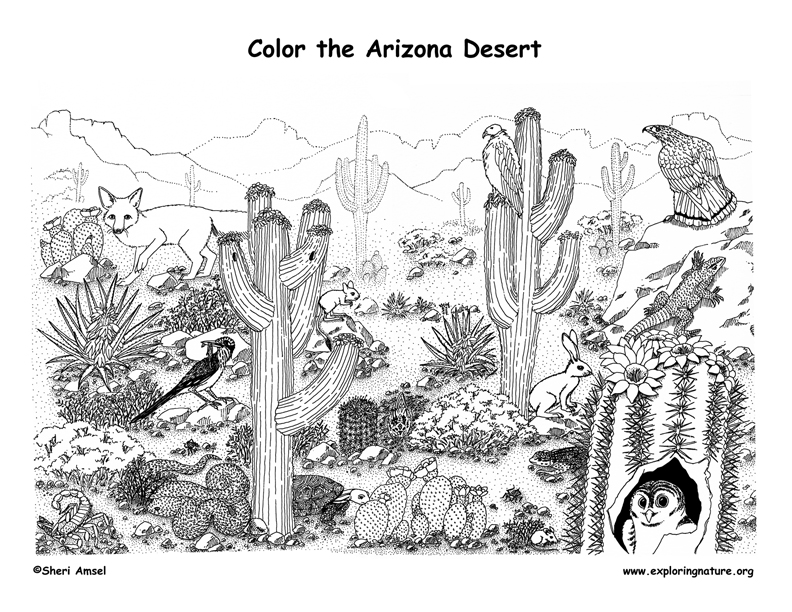 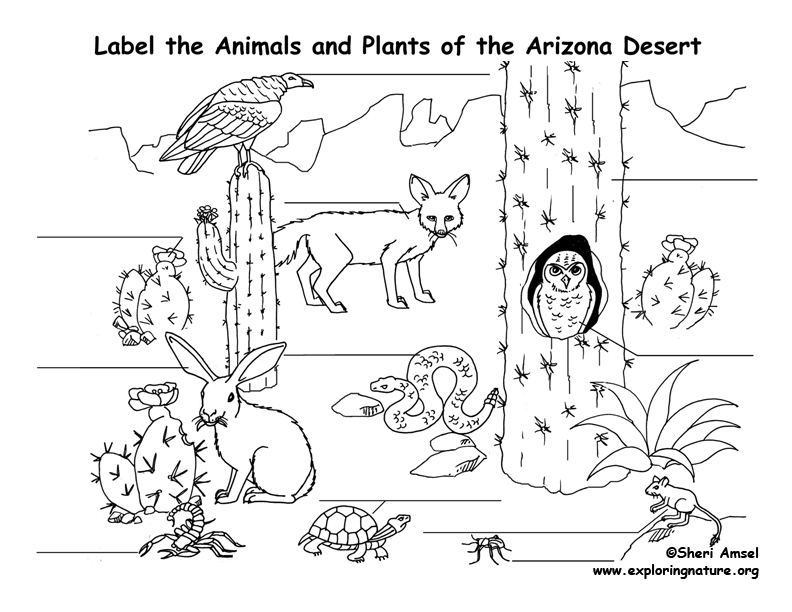 For more information about Arizona's mammals (including Latin names) click on individual animal links or for another (off-site) resource: LINK 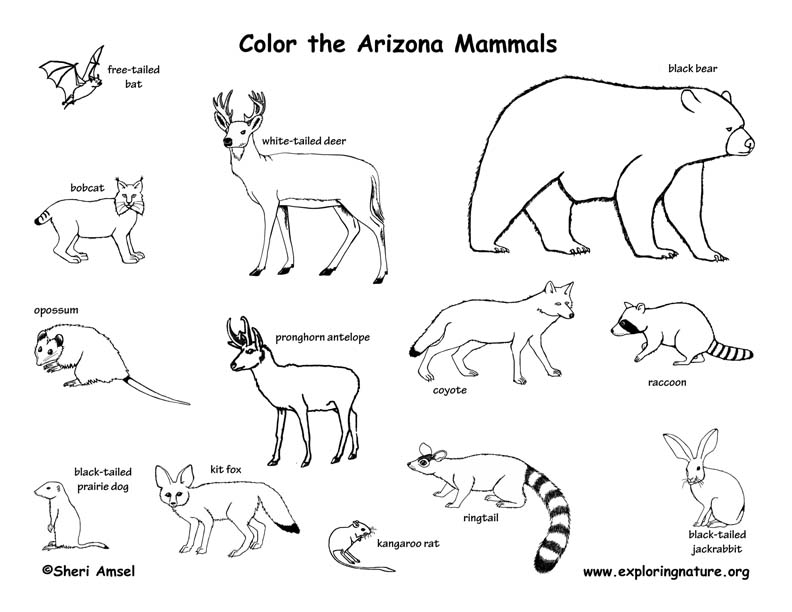 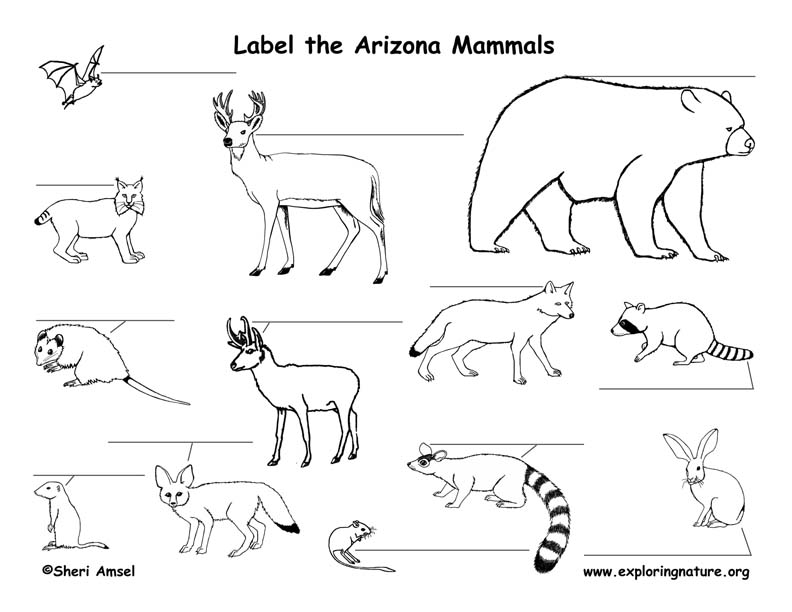 For more information about Arizona's amphibians (including Latin names) click on individual animal links or for another (off-site) resource: LINK

For more information about Arizona's reptiles (including Latin names) click on individual animal links or for another (off-site) resource: LINK 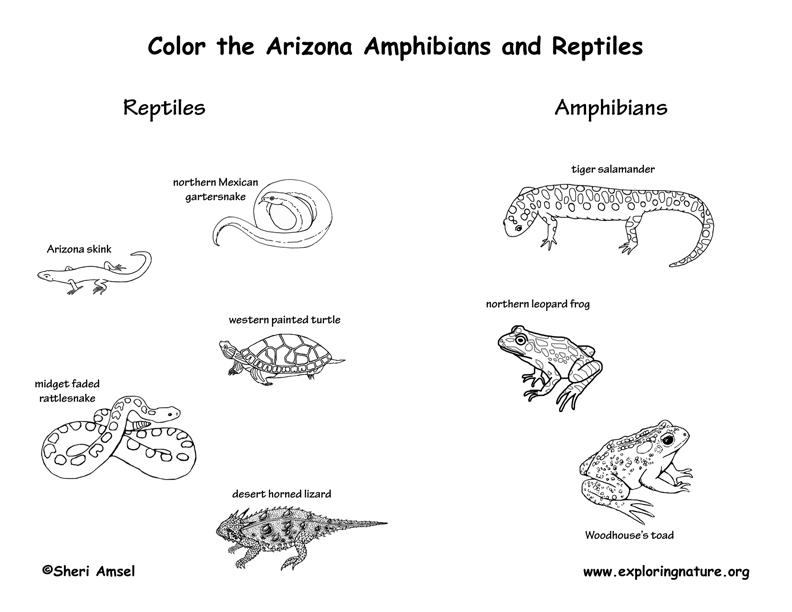 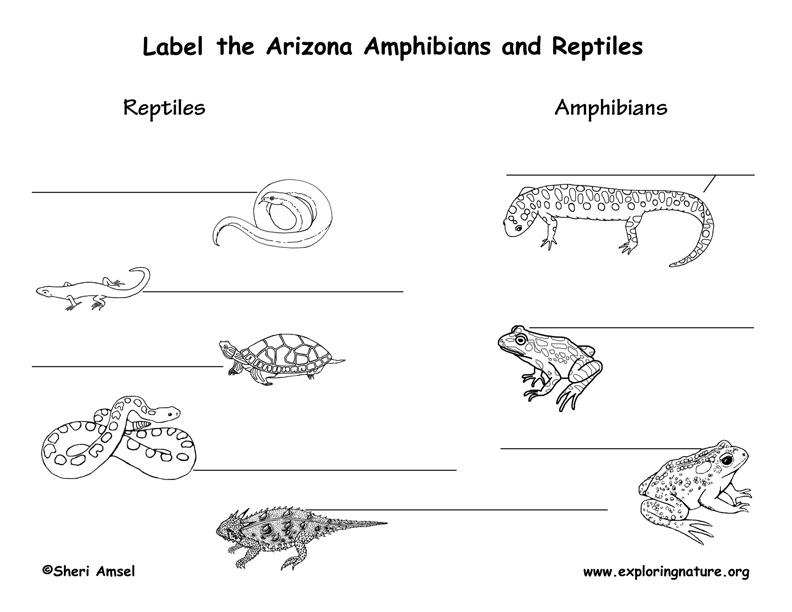 For more information about Arizona's birds (including Latin names) click on individual animal links or for another (off-site) resource: LINK 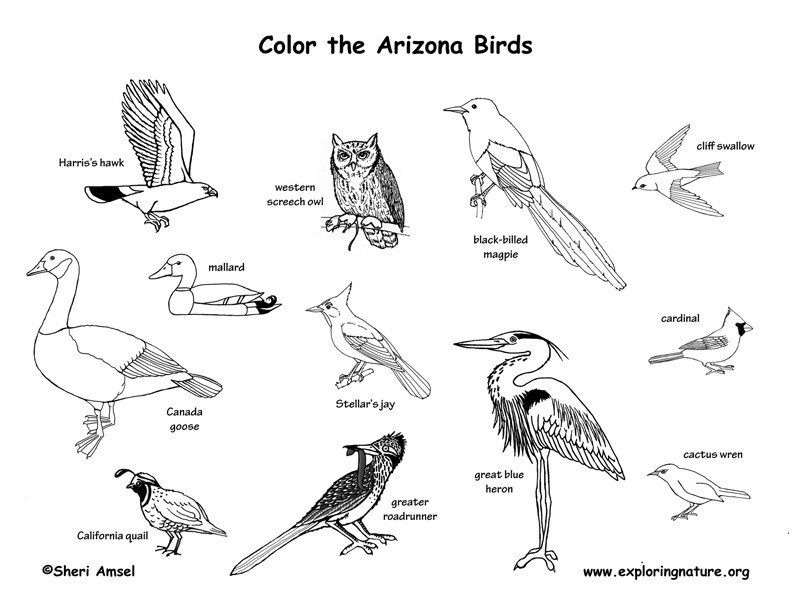 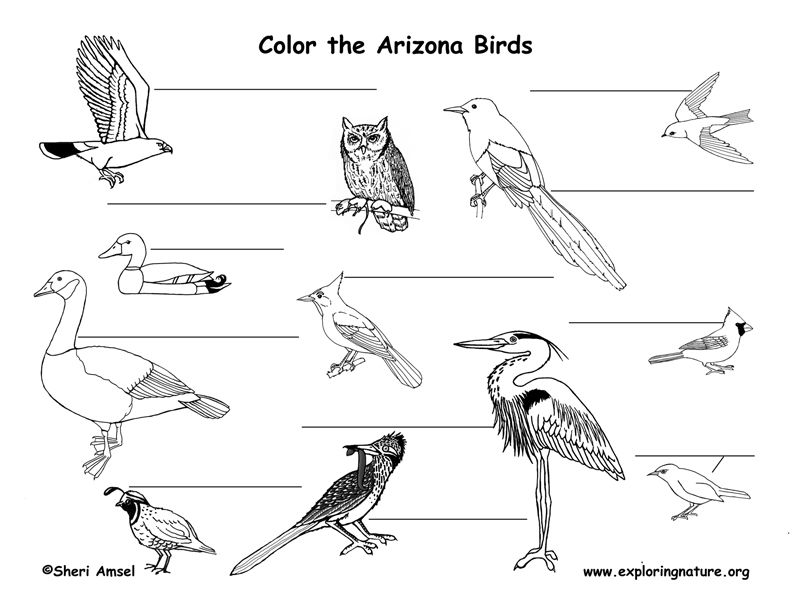 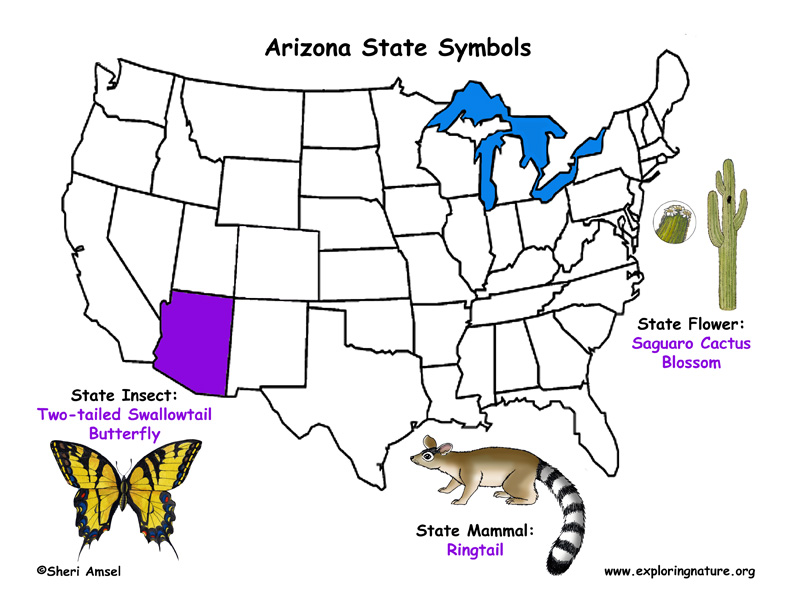 ©2005-2023 Sheri Amsel. All rights reserved.
The material on this site may not be reproduced, distributed, transmitted, cached or otherwise used for anything other than free educational use. It is not to be used for sale or profit of any kind. If you are unsure whether your use of site materials violates the exploringnature.org copyright, contact Sheri Amsel for prior written permission at sheri@exploringnature.org. Thank you for respecting copyright laws.
Site Developed by Eli Madden
Page ID: 822
IP: 35.173.35.14