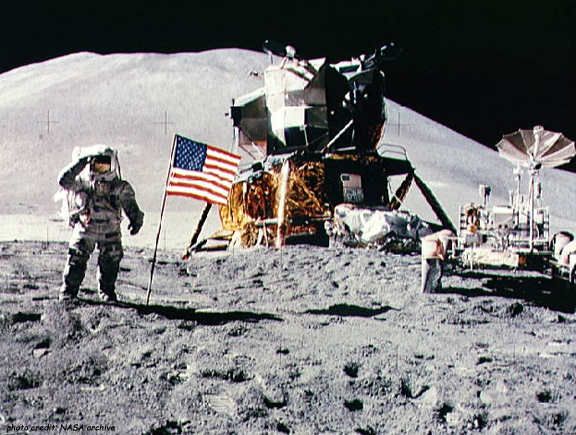 The goal of Project Apollo was to land a man on the moon and get him (them) back to Earth safely, a goal set by President Kennedy in 1961.

With the knowledge collected from the Mercury and Gemini Projects, NASA continued the human spaceflight missions and landed on the moon with Apollo 11 in July 1969. Neil Armstrong was the first man to walk on the surface of the moon.

The Apollo spacecraft had 5 parts. (1)The Command Module (CM) where the astronauts sat for launch and landing. (2)The Service Module (SM) that held equipment, oxygen tanks and the engine for getting in and out of orbit around the moon (lunar orbit). Together these 2 sections were called the Command and Service module(CSM) and made up the major part of the spacecraft. (3)The Lunar Module (LM) that took the crew down to the moon?s surface and brought them back up to the ship afterward. (4)The Launch Escape Tower (LET) for pushing the Command Module away from the launch vehicle (usually a Saturn Rocket) if it should explode during launch. (5)The Spacecraft Lunar Module Adapter (SLA) that connected the spacecraft to the launch vehicle.

Astronauts trained to land on the moon in a specially made Lunar Landing Research Vehicle (LLRV) that had simulated the low gravity of the moon while on the Earth.

The Apollo spacecraft was launched into space on a rocket (mostly Saturn Rockets) and came back to Earth by dropping into the ocean (splash down). Some of the more technically difficult parts of the mission where entering the moon orbit, the lunar landing, the re-launch off the moon, docking with the ship and breaking orbit toward home.

There were, sadly, some tragedies as well. Three astronauts were killed by fire while sitting on the launch pad in Apollo 1 (Gus Grissom, Ed White and Roger Chaffee) and an explosion on Apollo 13 caused that moon mission to be aborted and only with the help of flight control, NASA engineers, and other astronauts on the ground, did they get back to earth safely.

©2005-2022 Sheri Amsel. All rights reserved.
The material on this site may not be reproduced, distributed, transmitted, cached or otherwise used for anything other than free educational use. It is not to be used for sale or profit of any kind. If you are unsure whether your use of site materials violates the exploringnature.org copyright, contact Sheri Amsel for prior written permission at sheri@exploringnature.org. Thank you for respecting copyright laws.
Site Developed by Eli Madden
Page ID: 1878
IP: 18.232.56.9