The development of antibiotics began with an accidental contamination of a culture plate of staphylococcus with mold – a fungus, Penicillium notatum. In 1928, Sir Alexander Fleming, a Scottish researcher, found that the mold had prevented the growth of staphylococcus bacteria. By WWll, the resulting drug – penicillin, was being mass produced and used to treat injured soldiers throughout Europe. Before its development, there was no effective treatment for a whole range of illnesses, including tuberculosis, rheumatic fever, sepsis, and pneumonia. For decades, antibiotics proved to be a wonder drug for the treatment of a myriad of difficult bacterial infections.

Then, as antibiotics started to be used more commonly worldwide, resistant strains of bacteria began to appear. According to the Center for Disease Control (CDC), at least 2.8 million people are infected with antibiotic-resistant bacteria every year in the U.S. resulting in the deaths of more than 35,000 people.

How does natural selection play a role in antibiotic resistance? Consider what you have learned so far about natural selection. In all populations of organisms (including bacteria) there is some genetic variability. In populations of bacteria, there are some that are resistant to one or more antibiotics. After a course of antibiotic kills all the bacteria it can kill, the only bacteria left are the ones that are resistant. With nothing to stop them, they can propagate (reproduce and grow in numbers). Resistance, as an adaptive trait, is then passed on to the next generation. This differential reproduction leads to a successive generations of antibiotic resistant bacteria.

This is made worse by the misuse and overuse of antibiotics for non-bacterial illnesses in humans and pets and to promote growth in livestock. Resistant bacteria can spread between people, animals, food, and into the environment though wastewater. In addition, bacteria can develop other resistance mechanisms. These include bacteria actually sharing the resistance trait with other bacteria through small pieces of DNA called mobile genetic elements.

Antibiotic Resistance - Mathematical Modeling and AnalysisRead about antibiotic resistance, check the online resources provided and complete the analysis.
Attached below is a graphic published in Nature, the International Weekly Journal of Science* in 2015, showing the spread of antibiotic resistance.
On a separate sheet, explain how the graph supports or explains the following statements in regard to antibiotic resistance:
1) Natural selection may lead to increases (and decreases) of specific traits in populations over time.
2) There are changes over time in the distribution of traits within a population.
3) Through natural selection, traits that better support survival and reproduction are more common in a population than those traits that are less effective. 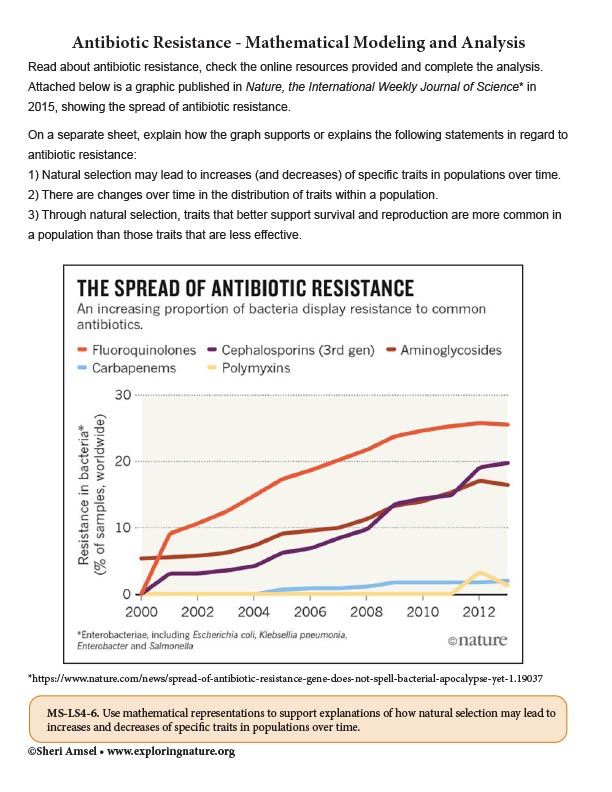 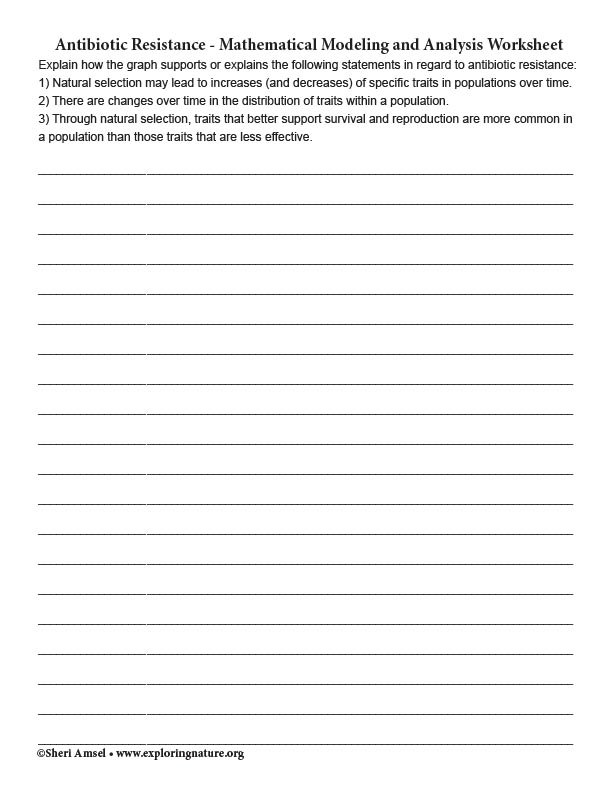 Below are two vetted websites with more on this topic, including infographics:
Center for Disease Control (CDC)
Nature, International Journal of Science

©2005-2022 Sheri Amsel. All rights reserved.
The material on this site may not be reproduced, distributed, transmitted, cached or otherwise used for anything other than free educational use. It is not to be used for sale or profit of any kind. If you are unsure whether your use of site materials violates the exploringnature.org copyright, contact Sheri Amsel for prior written permission at sheri@exploringnature.org. Thank you for respecting copyright laws.
Site Developed by Eli Madden
Page ID: 6224
IP: 3.238.118.80