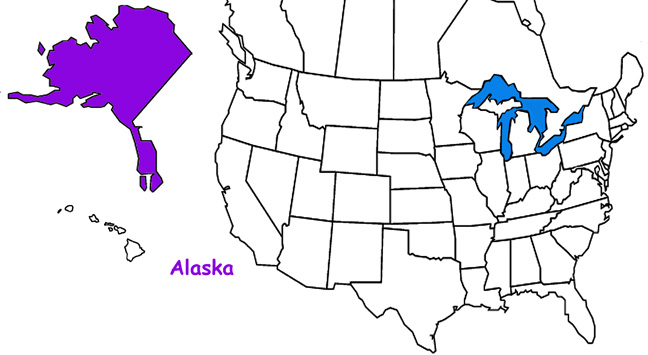 Alaska is a huge state with 44,000 miles of shoreline. This is more shoreline than the lower 48 states' eastern and western coasts put together! Beside for this huge length of coastal habitats, Alaska has mountains, glaciers, tundra, wetlands, rivers, lakes and boreal forest.

Wetlands
It is estimated that the state of Alaska is more than 43% wetlands. These wetlands are made up of peat bogs, spruce bogs, wet tundra (grass wetland), muskeg, and the wetlands that border lakes and rivers. Alaska has an abundance of border wetlands due to its huge river system. Every river has floodplains and riparian habitats that line them. Also, when these rivers reach the ocean they spread out into large deltas that are also large wetlands and vital habitat to wildlife. It is estimated that more than 50 million seabirds nest on the Alaskan coast every summer. The coast is also home to rich tide pool habitats and even cold water reefs.

The muskeg is bog that stretches for miles covered with this sphagnum moss. Sphagnum moss will grow over small ponds in a thick mat.  Shrubs like cranberries, blueberries and willows grow around the edges.

Tundra
The tundra is a treeless expanse that sits in the coastal plain between Alaska's northern and western coasts and the boreal forests of the state's interior. The tundra is wind swept and frigid with a short growing season and the permafrost just inches below the surface. Despite this, there is abundant life in the tundra and during its short growing season. The top layer of the soil, above the permafrost, does melt in the summer and grows hearty plants with short life cycles, like arctic willow (shrub), arctic poppy, moss, lichens, and cushion plants (that grow tight and low to the ground) like saxifrage, and moss campion. Because the frozen permafrost sits below the soil, there is no place for melted snow to go, so the arctic tundra stays wet and boggy in the summer months. This makes it hard to walk on but is a perfect habitat for water-born insects like mosquitoes. The mosquito season on the tundra may be short, but it is fierce. Animals that live on the tundra, including ptarmigan, lemming, arctic hare, caribou, musk ox, arctic fox and wolf have physical traits like cryptic coloring, large, snowshoe-like feet or heavy winter coats that help them survive the extreme climate.

Forests
The northern boreal forest spreads across central Alaska in a high rolling plain. Also called the taiga, the boreal forest is made up of mainly conifers -  mostly spruces, but also tamarack, jack pine, and balsam fir. There are also stands of paper birch, quaking aspen, alder, and balsam poplar. There are bogs, called muskeg, that stretch for miles covered with sphagnum moss in a thick mat. There are also marshes, rivers, and lakes and along every waterway are riparian habitats. Though uncomfortable for humans and other mammals, the mosquitos that breed in riparian habitats (and other wetlands) provide food for fish and songbirds. The rivers are full of fish and those that host the annual salmon migrations from the ocean (Yukon and Kuskokwim Rivers) provide abundant feeding grounds for mammals and birds. The river are also the way many humans travel in the parts of the Alaska's interior that has few roads. The northern boreal forest is home to abundant wildlife - timber wolves, black and grizzly bears, lynx, fox, eagles, and moose.
On the coast of Alaska are some of the few temperate rainforests found on Earth. These are often dense old-growth forests of Sitka spruce, mountain hemlock, western hemlock, and yellow cedar. 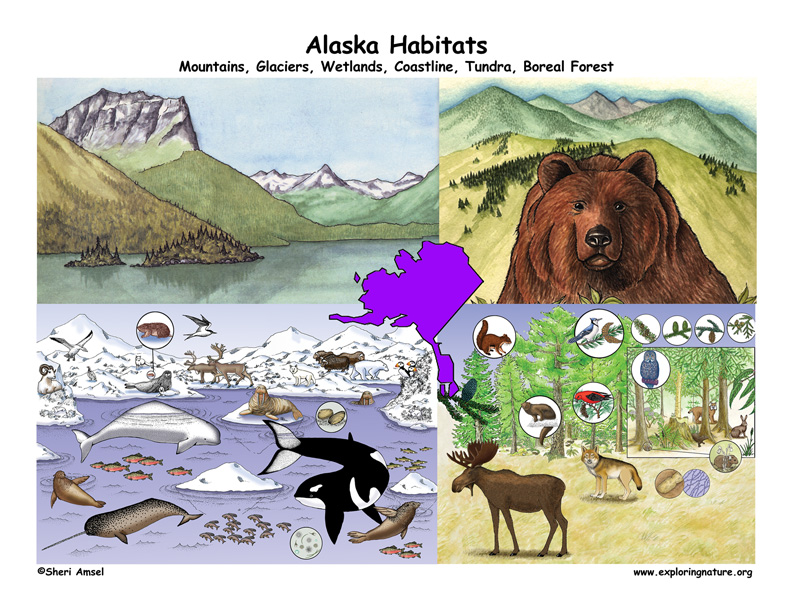 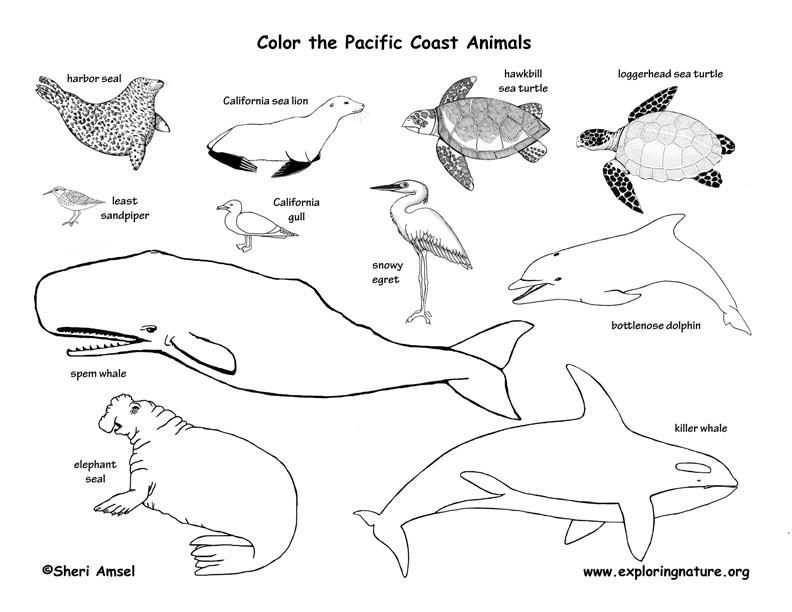 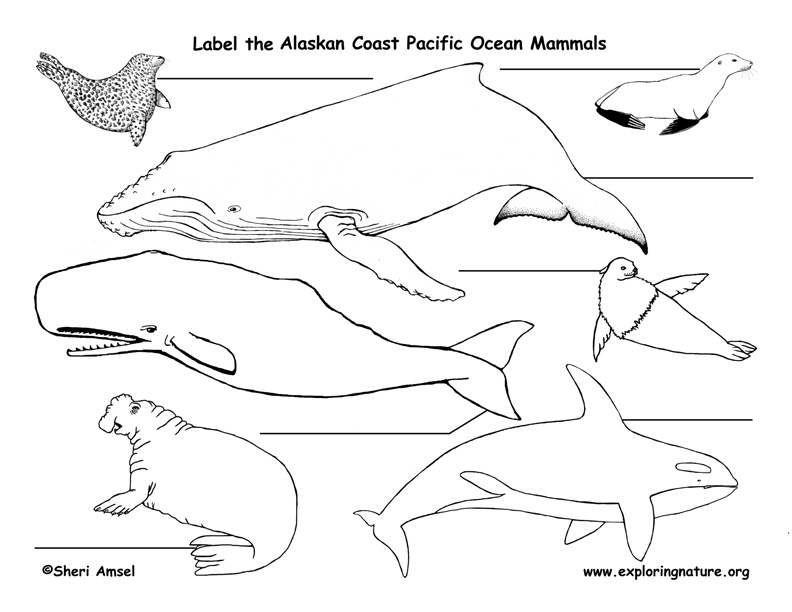 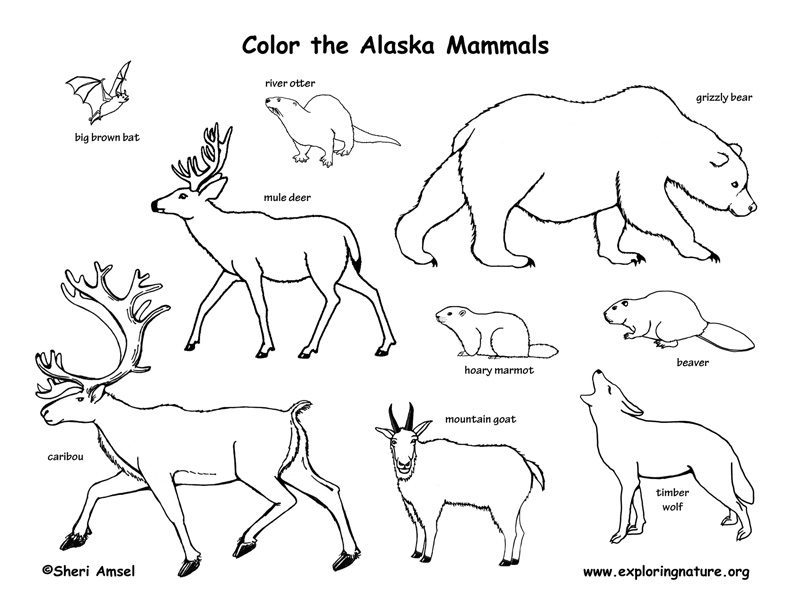 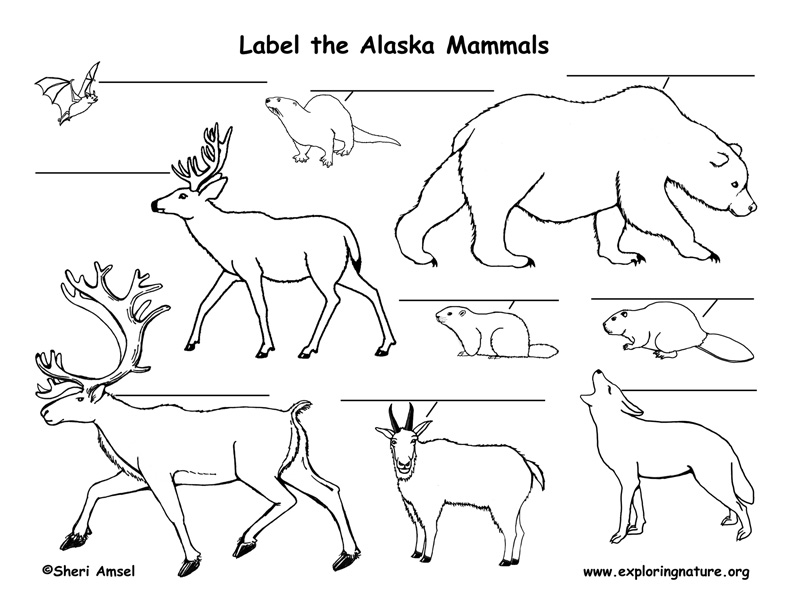 For more information about Alaska birds (including Latin names) click on individual animal links or for another (off-site) resource: LINK 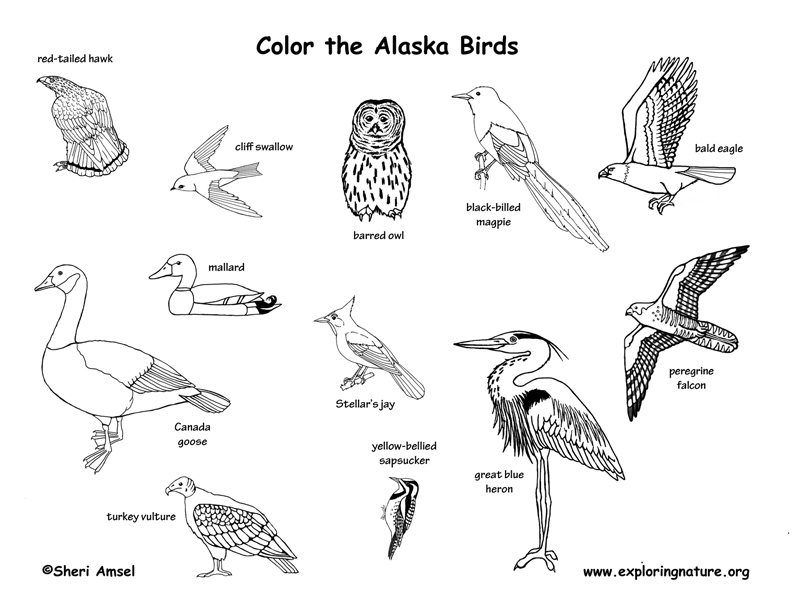 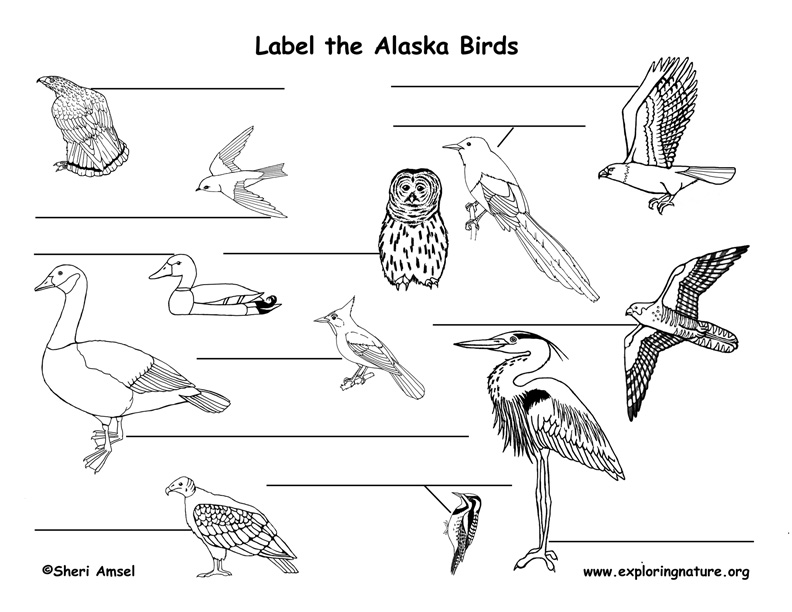 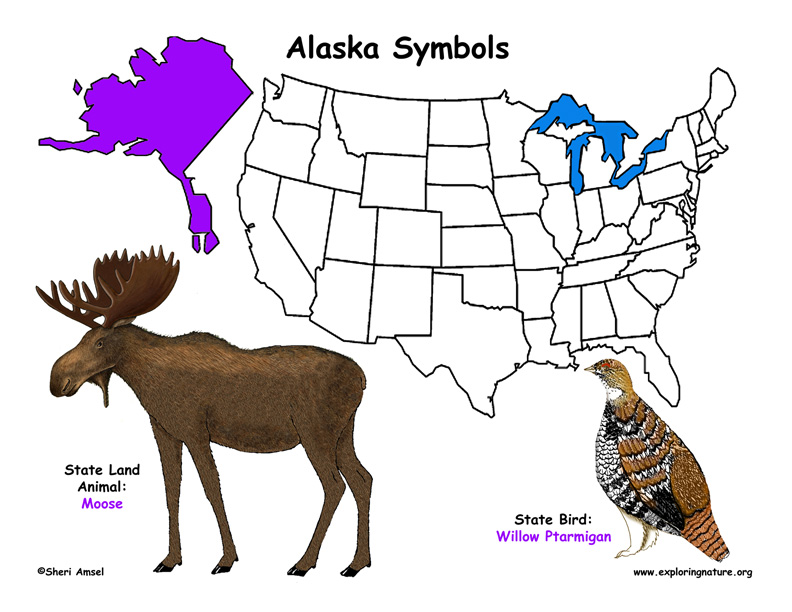 ©2005-2023 Sheri Amsel. All rights reserved.
The material on this site may not be reproduced, distributed, transmitted, cached or otherwise used for anything other than free educational use. It is not to be used for sale or profit of any kind. If you are unsure whether your use of site materials violates the exploringnature.org copyright, contact Sheri Amsel for prior written permission at sheri@exploringnature.org. Thank you for respecting copyright laws.
Site Developed by Eli Madden
Page ID: 834
IP: 35.173.35.14