In a population of organisms, such as a herd of caribou, all the individuals have physical and behavioral traits that help them survive and reproduce in their habitat. For example, caribou have long legs for running across the Arctic tundra to escape predators. They also have a thick hide to protect them from winter winds and swarms of mosquitoes in spring. These helpful characteristics are called adaptive traits. “The traits that positively affect survival are more likely to be reproduced, and thus are more common in the population.” This means that if an adaptive trait is inheritable and increases an individual’s survival rate, it may also increase its reproduce rate producing offspring that also have the adaptive trait. This is called differential reproduction.

Though a population of organisms are all the same species, they are not exactly the same. There is always some genetic variability that results from mutations and/or sexual reproduction. If “variation in the expression of that genetic information — that is, trait variation — leads to differences in performance among individuals” this may make them more likely to survive. They would have a selective advantage. For example, a caribou born with wider feet might have an advantage over others in the herd if it can run across the snow without breaking through as easily as others. It may survive longer and have more offspring who might also be born with their adaptive trait.

This is an example of natural selection. Natural selection occurs only if there is: 1) genetic variation in a population, 2) a selective advantage in the genetic variation, and 3) enhanced ability for reproduction resulting in offspring carrying that adaptive trait. More surviving offspring carrying that adaptive trait is, again, differential reproduction.

“Natural selection leads to adaptation.” This means that in a population of organisms, the individuals with inheritable, adaptive traits, which help them survive and reproduce more successfully, will become more common in future generations. The individuals without those adaptive traits will decrease in the population over time. This is also driven by the fact that, in a population, there is always “competition for an environment’s limited supply of the resources that individuals need in order to survive and reproduction.” For example, not all the individuals in a caribou herd survive the challenges of migrating across the tundra, finding food, escaping predators, and raising offspring. Only the surviving caribou who out-compete other individuals will pass on their adaptive traits to their offspring to have a significant effect on future generations.

Populations also have to respond to changes in their physical environment. This can be naturally occurring changes or human created. They can benefit a population or cause their decline or even extinction. For example, if the Arctic tundra no longer freezes in winter because of human induced climate change, it might become very difficult for herds of caribou to migrate across the tundra. They may sustain more leg injuries running across wet, spongy, uneven ground. They may fall prey to faster moving wolf packs. They may even become weakened by mosquitoes feeding on their blood with an elongated spring season. 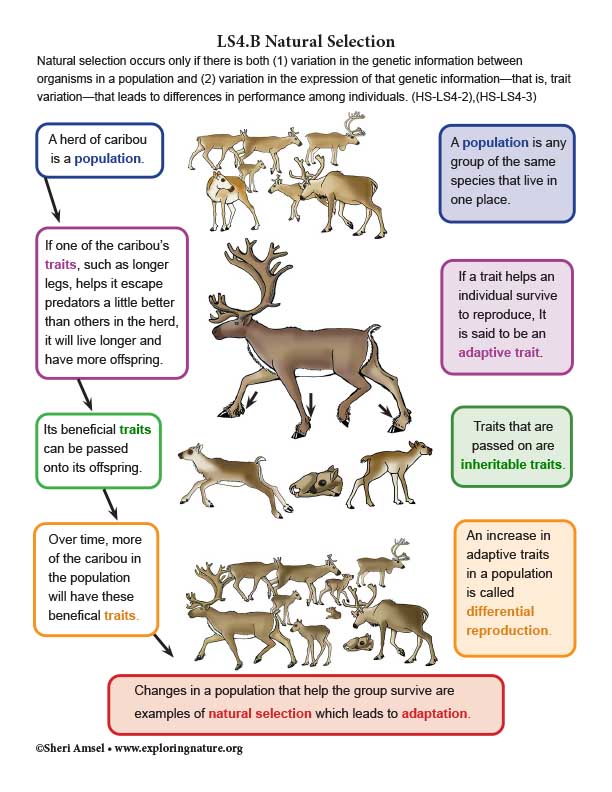 ©2005-2022 Sheri Amsel. All rights reserved.
The material on this site may not be reproduced, distributed, transmitted, cached or otherwise used for anything other than free educational use. It is not to be used for sale or profit of any kind. If you are unsure whether your use of site materials violates the exploringnature.org copyright, contact Sheri Amsel for prior written permission at sheri@exploringnature.org. Thank you for respecting copyright laws.
Site Developed by Eli Madden
Page ID: 6381
IP: 18.232.56.9