Adaptation - What is it? (Elementary Reading Level)

The herd of caribou is called a population. A population is a group of the same kinds animals (or other living things) that live in one place.

Each of the things about the caribou, such as its color, size and antler shape is called a trait. If one of the caribou's traits help it escape from the wolves, such as longer legs for running faster, this trait helps it survive. (Vocabulary: Scientists call these helpful traits, like longer legs, adaptive traits.)

If a caribou has a helpful trait, like longer legs, and it lives longer, it will have more baby caribou over its life time.

If their babies are also born with that helpful trait, it means that it was passed on from parent to baby. (Vocabulary: Scientists call this an inheritable trait.)

Over time, more and more of the caribou will have this trait and so they will live longer and have more babies. (Vocabulary: Scientists call this differential reproduction.)

(Vocabulary: This is an example of natural selection. Natural selection can lead to the adaptive trait showing up in more and more of a population. Adaptative traits may help an animal find food or make a safer home or escape predators or survive cold, heat or lack of water. Below are some examples of Adaptive Traits.)

Some insects look so much like the leaves or branches on which they feed, that they have a disguise.

Some animal make noises that warn other animals away. For example, a rattlesnake shakes the rattle on its tail. A raccoon may show its teeth and hiss. Other animals make themselves larger to scare an enemy away. (Vocabulary: Scientists call this adaptive behavior.) 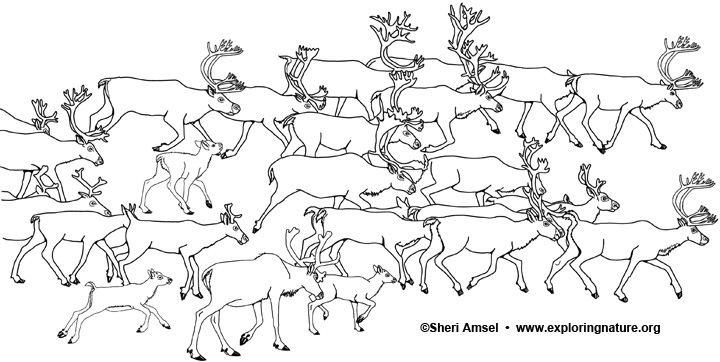 Advanced Vocabulary Guide:
There are 3 things that drive natural selection and adaptation:

1) Body differences (genetic variability) in a herd (population), so that a new trait might help in some way (adaptive trait).

2) The trait must able to be passed down to babies (inheritable).

3) The trait must lead to more babies growing up to have babies of their own (natural selection), so the trait will spread throughout the population (differential reproduction).

Vocabulary:
A trait is a physical or behavioral feature of a living thing.

An adaptive trait is a trait that helps a living thing survive longer.

An inheritable trait is a trait that is passed down from parent to offspring.

Differential reproduction is when an adaptive, inheritable trait spreads throughout a population because it leads to more offspring surviving.

Genetic variability is when living things of the same species have traits that are not exactly the same.

Natural selection is when an inheritable trait helps a living thing survive longer than others in its population without that trait.

Population is many of the same species of living in one area.

©2005-2022 Sheri Amsel. All rights reserved.
The material on this site may not be reproduced, distributed, transmitted, cached or otherwise used for anything other than free educational use. It is not to be used for sale or profit of any kind. If you are unsure whether your use of site materials violates the exploringnature.org copyright, contact Sheri Amsel for prior written permission at sheri@exploringnature.org. Thank you for respecting copyright laws.
Site Developed by Eli Madden
Page ID: 5224
IP: 3.236.225.157