About the Respiratory System

Every cell in the body must have oxygen at all times to survive. They also must get rid of their carbon dioxide waste. That is the job of the respiratory system. There are actually four parts to respiration. First, the air must come in and out of the lungs bringing oxygen in and carbon dioxide out (pulmonary ventilation). Second, the oxygen and carbon dioxide must be exchanged in the capillaries lining the tiny alveoli inside the lungs (external respiration). Third, the oxygen and carbon dioxide must get to and from the lungs to all the cells of the body traveling in the blood (transport of respiratory gases). Fourth, the oxygen, once it reaches the tissues in capillaries, must go across to the cells, while carbon dioxide comes from the cells (internal respiration). The organs of the respiratory system include: nose, pharynx, larynx, trachea, bronchi, bronchioles, lungs and alveoli. We can break the organs of the respiratory system down into two parts: The respiratory zone, where the actual gas exchange happens. This includes: the aveoli, their tiny ducts and some of the smaller bronchioles. The rest of the organs are simply conducting zone (dead air space). This includes: nose, pharynx, larynx, trachea, and bronchi.

Activities to Learn About It 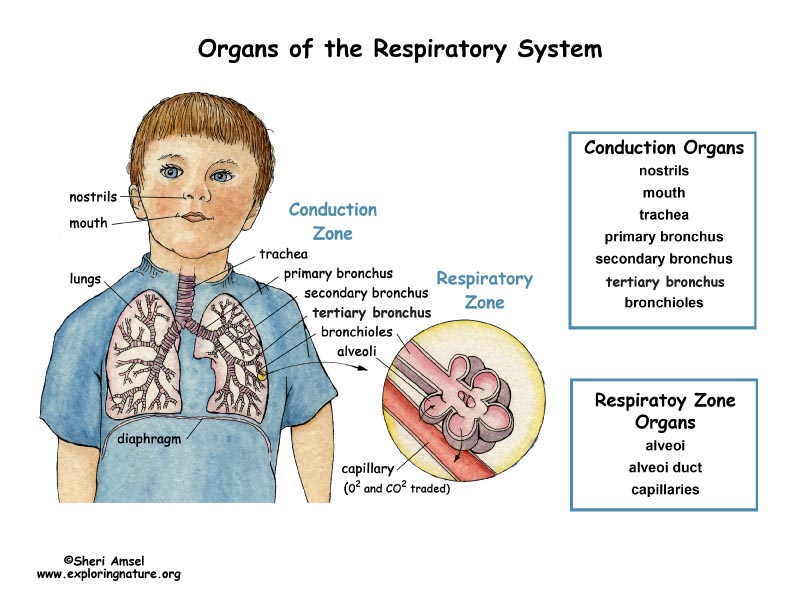 ©2005-2022 Sheri Amsel. All rights reserved.
The material on this site may not be reproduced, distributed, transmitted, cached or otherwise used for anything other than free educational use. It is not to be used for sale or profit of any kind. If you are unsure whether your use of site materials violates the exploringnature.org copyright, contact Sheri Amsel for prior written permission at sheri@exploringnature.org. Thank you for respecting copyright laws.
Site Developed by Eli Madden
Page ID: 1554
IP: 3.238.204.167