Trees are broken down into two groups, the gymnosperms (conifers) and the angiosperms (deciduous trees).

The conifers (gymnosperms) can grow into massive, long-lived trees. They have needle-like leaves that are well adapted to temperature and moisture extremes and high winds. The conifers are also called softwood trees.

Small male cones are found at the tip of the lower branches and release pollen, which is carried by the wind to pollinate the larger female cones located near the top of the tree. Once the female cones are fertilized, they will develop seeds. This may take three years. When the cones open, papery-winged seeds are released.

Fertilization is separate from pollination and can take up to 15 months to be completed. Then the fertilized ovule develops into the seed. The seed contains the embryo, food and seed coat. Finally, almost three years from the release of pollen, the woody female cone opens and releases its seeds. The seeds have papery wings, which help them disperse. If they find a suitable spot to germinate into a seedling and the life cycle has been completed.

Male and female cones have haploid (n) spores. Male cones release pollen in the spring, which is spread by the wind. Some reach female cones, which release a sticky fluid that traps the blowing pollen. The pollen, over time, will burrow into the female cones ovule to reach and fertilize the egg. Eventually the cone will fall and in the right conditions grow into a conifer tree. 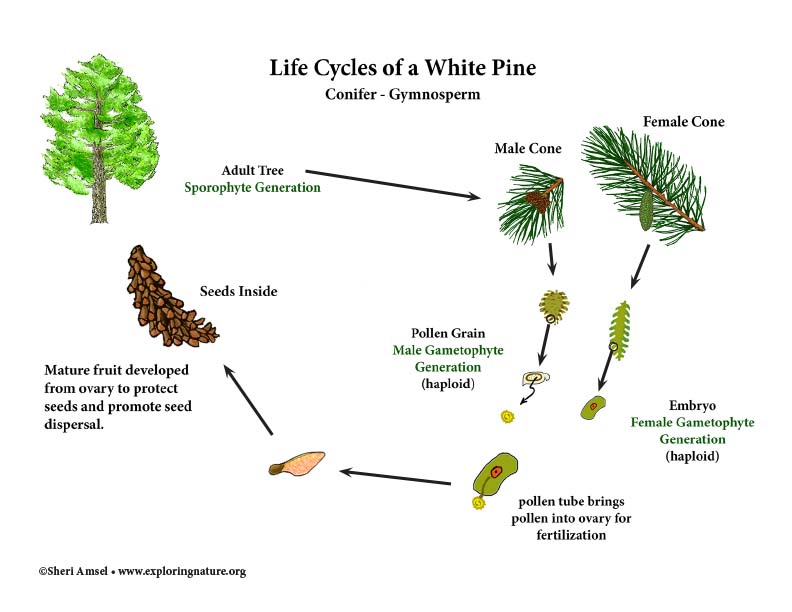 ©2005-2023 Sheri Amsel. All rights reserved.
The material on this site may not be reproduced, distributed, transmitted, cached or otherwise used for anything other than free educational use. It is not to be used for sale or profit of any kind. If you are unsure whether your use of site materials violates the exploringnature.org copyright, contact Sheri Amsel for prior written permission at sheri@exploringnature.org. Thank you for respecting copyright laws.
Site Developed by Eli Madden
Page ID: 6029
IP: 3.239.119.61