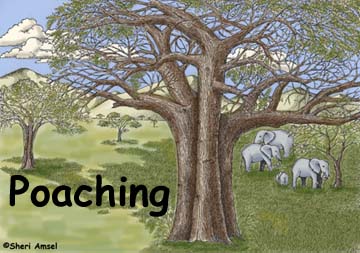 Most countries around the world have made laws to stop or limit hunting of endangered species. A treaty called, The Convention on International Trade in Endangered Species of Wild Fauna and Flora (CITES) has been signed by most countries.

Though many animals are protected from hunting, it does not stop some people from hunting them illegally. This is called poaching. Poaching happens all over the world, because poachers can get a lot of money for their illegal game. They sell the horns, ivory, body parts, and skin of protected animals.

Even with game wardens hired to patrol animal preserves, poachers have the advantage. Preserves are very large tracts of land and there are not enough wardens to protect the whole thing. The other problem is that poachers that go after big game like elephants and rhinos have big guns and can be very dangerous. One warden cannot stop six poachers and might get killed if they try. In many places, poachers seem to be winning out over our endangered species.

Poaching does not just happen in Africa or Asia. There is a lot of poaching in our own National Parks right here in the United States. People steal cactuses, trees, tortoises, and even grass if they can sell it.  It’s a frustrating problem for those of us who want to protect our disappearing national treasures.

What You Can Do To Help

There are many ways you and your family can help stop poaching.

©2005-2022 Sheri Amsel. All rights reserved.
The material on this site may not be reproduced, distributed, transmitted, cached or otherwise used for anything other than free educational use. It is not to be used for sale or profit of any kind. If you are unsure whether your use of site materials violates the exploringnature.org copyright, contact Sheri Amsel for prior written permission at sheri@exploringnature.org. Thank you for respecting copyright laws.
Site Developed by Eli Madden
Page ID: 644
IP: 54.225.48.56