Our blood is pushed all around our bodies by a pump -- the heart. Your heart is about the size of your fist and grows with you as you grow. The heart is made of muscle and weighs less than a pound. The heart sits between the lungs. It is protected inside the ribcage.

The heart has four rooms (or chambers). It has two smaller rooms on top called atria. It has two bigger rooms on the bottom called ventricles. The atria are separated from the ventricles by doorways called valves. Valves are important because they keep the blood flowing forward.

The circulation of the blood through the heart is always the same.

1. The blood comes back to the heart through two big tubes called veins. The two big veins attached to the heart care called the vena cavas.

2. The blood flows from the vena cavas into the first top room, called the right atrium.

3. Then the blood passes through a valve doorway made up of three cups. It is called the tricuspid (3-cupped) valve.

4. The blood is then in the first bottom room, called the right ventricle.

5. From there, the blood is pumped through tubes (called pulmonary arteries) to the lungs.

6. In the lungs, the blood picks up oxygen and drops off carbon dioxide.

7. Then the blood comes back to the heart through tubes (called the pulmonary veins).

8. The blood re-enters the heart into the left atrium.

9. Then the blood goes through the another valve doorway made up of just two cups. It is called the bicuspid (2-cupped) valve (or the mitral valve).

10. The blood is now in the last bottom room, called the left ventricle.

11. The left ventricle is the strongest, most muscular chamber of the heart. It pumps the blood through a biggest tube in the body, called the aorta.

12. From here, the blood flows to the whole body, bringing oxygen to the tissues that need it. 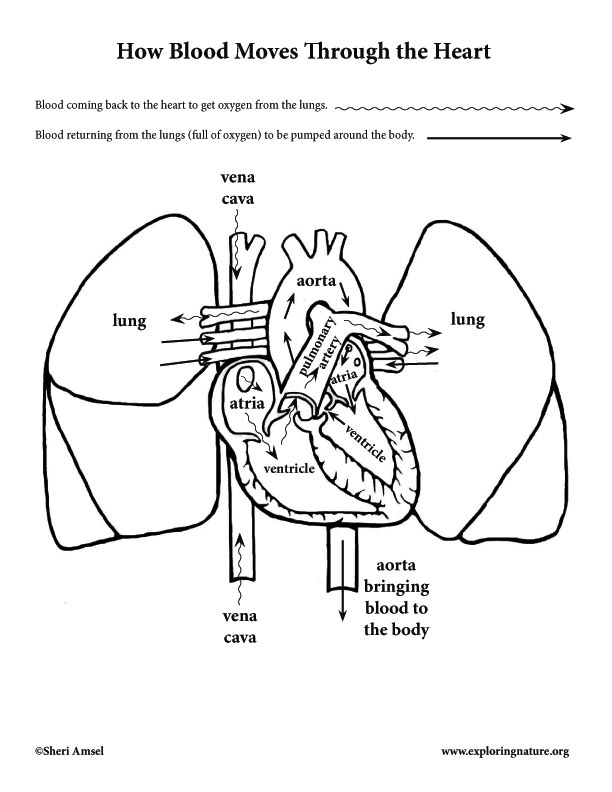 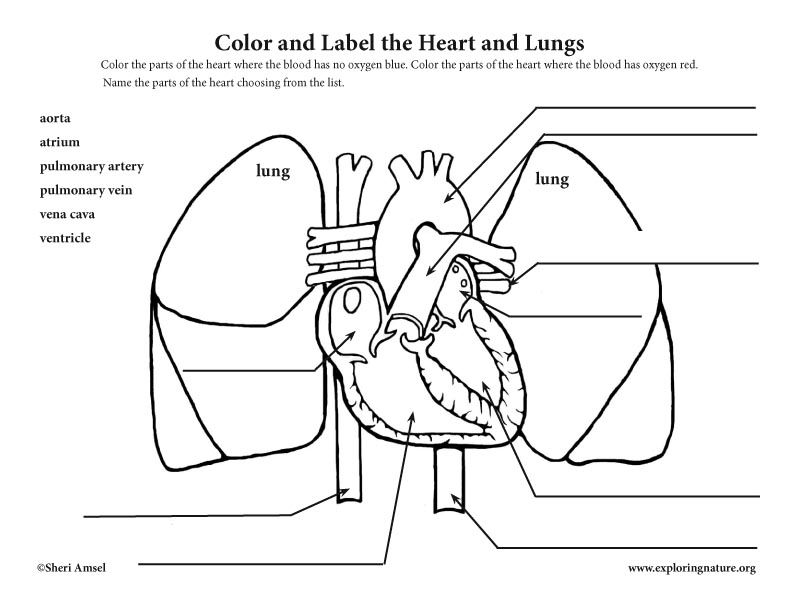 ©2005-2023 Sheri Amsel. All rights reserved.
The material on this site may not be reproduced, distributed, transmitted, cached or otherwise used for anything other than free educational use. It is not to be used for sale or profit of any kind. If you are unsure whether your use of site materials violates the exploringnature.org copyright, contact Sheri Amsel for prior written permission at sheri@exploringnature.org. Thank you for respecting copyright laws.
Site Developed by Eli Madden
Page ID: 5027
IP: 18.232.31.206