Ocean Dumping - How Does it Affect Ocean Life and Why Do People Do It? 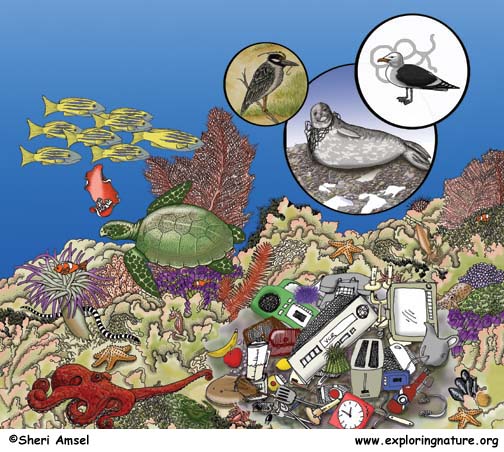 If you look at a map of the world you can see many different oceans, but in fact they are all connected, covering ¾ of the Earth. Oceans are so vast and huge that they have many different kinds of habitats in them. The surface of the ocean, where sunlight can reach, is called the epipelagic zone. It is where most sea life is found. Here millions upon millions of tiny phytoplankton float along making their living on the energy of the sun using photosynthesis. They are at the bottom of the food chain in the ocean and many animals feed on them. In this layer of the ocean we find most of the fish, sharks, rays, jellyfish, marine mammals and sea turtles. Another ocean habitat is the coral reef. After rainforests, coral reefs are thought to have the most biodiversity of any other kind of habitat. That means they have a huge number of animals and plants living there. They are a rich and important habitat. Tide pools are another distinct ocean habitat. They are found where the oceans meet the shorelines. The low tide zone has the most species, as it gets sun, water and is mostly beyond the pounding waves. Animals in tidal zones have to adapt to wave action by developing anchors so they won’t get washed away plus be able to move to stay wet in the changing tide.

All these ocean habitats and the plants and animals who live there are vulnerable to ocean pollution. (See #4 below)

2. Why are people throwing garbage in the ocean?

Ocean pollution can come in many forms. It can result from oil tankers spilling oil, boats sinking or even just ocean litter. Large or small, ocean debris can cause problems for sea life and man. Garbage gets into the ocean when people dump it off boats and litter beaches, but it also can reach the ocean from rivers, storm drains or ocean dumping. Eventually all water on land flows toward the sea. So even when people litter in a city street, the next rainstorm can wash the garbage into waterways that will eventually dump them into the ocean. Our environments are all connected and our actions do affect them.

3. How do contaminants cause pollution in the ocean?

Contaminants are substances that have become poisoned by exposure to chemicals or other substances dangerous to humans (and other living things). Examples of this include radioactive waste from a nuclear power plant or nuclear submarine, sewage from a cruise ship, oil from a tanker, medical waste or even simple plastics dumped off boats or washed into the ocean from land. Just the way they might hurt humans on land, contaminants affect sea life.

4. How does pollution cause a lot of plants and animal deaths in the ocean?

Besides being ugly to look at, a lot of ocean debris, like plastic bottles, bags, Styrofoam peanuts, old fishing wire and nets are quite dangerous to wildlife. Whales and dolphin eat plastic bags thinking they are squid, sea turtles and ocean birds eat Styrofoam peanuts blocking their digestive tracts, and abandoned fishing nets tangle and drown thousands of seals every year. Even human swimmers and divers can get tangled in dumped nets and drown.

Other dangerous ocean pollutants include human sewage, oil spilled at sea and medical waste dumped in the ocean. These hazards endanger ocean animals, human swimmers and wash up on our beaches. Fish and shellfish become so toxic from eating pollutants that they are not safe for people to catch and eat either. This affects lobster and fisherman’s livelihood.

Coral reefs are always under pressure from collectors, who harvest the colorful corals and fish for aquariums and other markets. Snorkeling tourists walk on the fragile plants and animals and boaters pollute the delicately balanced habitat. Coral reefs are one of our most biologically diverse habitats, but they are also very delicate and are in serious danger. In 1998 President Clinton helped establish the U.S. Coral Reef Task Force to better preserve and protect coral reef ecosystems. Here are some ways people can protect coral reefs.

• Never run your boat into coral, watch for their brown color in shallow water.

• Don’t ever anchor a boat on coral. Use a coral reef buoy, if there is one, or anchor in the sand nearby.

• Never dump trash or dirty water (bilge) near a coral reef. They are sensitive!

• You can snorkel over a reef, but never step on coral. It is a living animal.

• Don’t troll (drag a hook) near a coral reef. Hooks can injure coral.

• Don’t support coral reef harvesters. Never buy coral for your fish tank unless it is been stamped with Marine Aquarium Council (MAC) stamp. This makes sure the coral was raised for aquariums and not from a wild reef.

5. Why does sewage from cruise ships pollute the ocean?

Sewage is a contaminant and can make both humans and ocean life sick. Humans have always depended upon the massive size of the ocean to dilute and break down the sewage released into the ocean. The problem is that there are so many humans now, making so much waste that the ocean can no longer absorb our sewage waste and remain healthy.

Cruise ships are allowed to dump sewage and waste water into the ocean as long as they are more than three miles from shore. They produce up to 25,000 gallons of sewage from toilets and 143,000 gallons of sewage from sinks, galleys and showers each day. Advanced wastewater treatment techniques are being developed to reduce this problem, but it took scrutiny from environmental groups and public outcry before this compromised was reached. Hopefully this will result in greatly reduced ocean dumping from cruise ships!

6. How do oil and antifreeze pollute our ocean when disposed of improperly?

Despite all efforts sometimes spills happen. On March 24, 1989 the Exxon Valdez, a huge oil tanker, hit a reef in Prince William Sound in Alaska. The hull of the ship cracked open and spilled more than 11 million gallons of crude oil into the sound. That oil spill was the largest in U.S. history. A spill that large is very bad anywhere, but a spill in Prince William Sound was even harder to deal with because there was so much wildlife to save and clean up. Afterward, Congress passed the Oil Pollution Act of 1990. It made stricter rules for oil tankers, their owners and captains. The tankers have to have stronger hulls and ship captains have to be in better contact with vessel traffic centers. No one wanted a spill like that to happen ever again.

Yet in 2010 disaster struck again. A BP oil rig doing deep water drilling in the Gulf of Mexico exploded and dumped millions of gallons of oil into the ocean creating the largest accidental marine oil spill in the history of the petroleum industry. It took more than 5 months to shut down the leaking wellhead, which leaked more than 4.9 million barrels of crude oil, causing extensive damage to marine and wildlife habitats and to the Gulf's fishing and tourism industries.

7. How do cars pollute the ocean?

Our cars, as a group, create more air pollution than almost any other industry on Earth.  Air pollution does affect the ocean, which is the home to thousands of species of air-breathing marine mammals, fish and other wildlife.

How much pollution can one little car make? Have an adult helper do this activity with you. All you need is one car and one white sock you don’t mind getting dirty.

• Use a car parked outside that has not been driven for a while (tail pipe must be cool).

• Pull your sock up over the tail pipe.

• Have your adult helper turn on the car and run it for a few minutes (no more than three minutes). Do not stand too close to the tail pipe or breathe in its fumes. Have them turn the car off.

• Have your adult helper remove the sock from the tail pipe (Be careful, it may be hot!).

• Look closely at your sock. Is the part that was over the opening of the tailpipe still white? This is the pollution that cars make. Imagine when your car runs for more than a few minutes. Now imagine the millions and millions of cars on the highway all running at once, hour after hour. Can you understand how cars are adding to our air pollution problems?

Cars also require oil, which is drilled in and shipped via tanker the ocean. (See # 6 about how that affects the ocean.)

What are people doing to help?

• In 1972 governments began to pass conventions and acts to stop ocean dumping.

• In 1987 the Water Quality Act was amended to stop polluted storm water and sewage from entering the ocean.

• In 1996 the National Marine Debris Monitoring Program (NMDMP) started a five-year study of coastal pollution checking sites monthly to see how much there is along U. S. coasts and where it is coming from.

• In 2000 under the Beach Act, the EPA helped states test and keep watch of their coastal waters to make sure the water is safe for people to use. Pollutants can make people sick. Shoreline, beach and ocean pollution hurt tourism. Boats are damaged by marine debris, which clogs engines and propellers. No one wants to vacation on a dirty beach!

• Organizations like the Ocean Conservancy organize annual beach and coastal water clean ups. They boast more than 100,000 volunteers across the U.S. and remove more than 3 million pounds of trash each year. 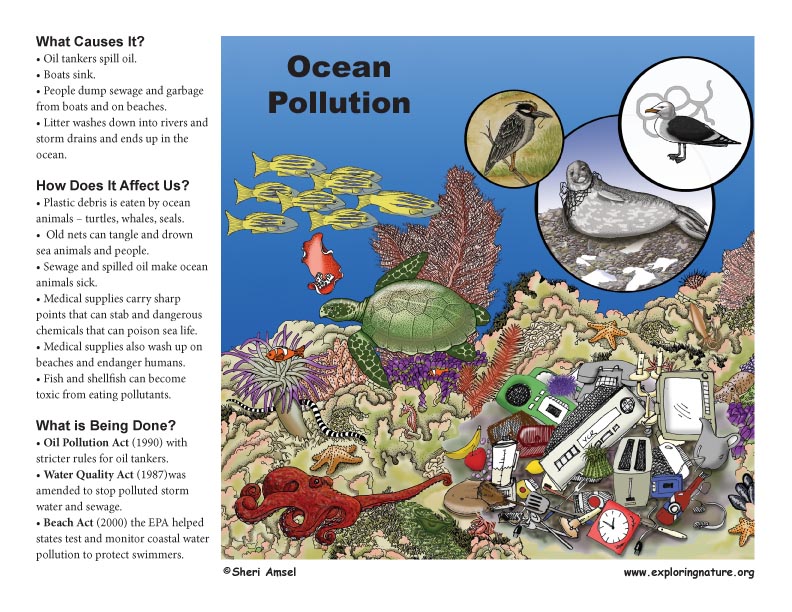 ©2005-2023 Sheri Amsel. All rights reserved.
The material on this site may not be reproduced, distributed, transmitted, cached or otherwise used for anything other than free educational use. It is not to be used for sale or profit of any kind. If you are unsure whether your use of site materials violates the exploringnature.org copyright, contact Sheri Amsel for prior written permission at sheri@exploringnature.org. Thank you for respecting copyright laws.
Site Developed by Eli Madden
Page ID: 1807
IP: 44.212.99.248