We are overdue for a killer asteroid to hit earth.

Asteroids are big rocks out in the solar system which orbit the sun. Most asteroids are found in a ring called an asteroid belt between Mars and Jupiter. There are thousands and thousands of asteroids of all shapes and sizes found there. We’ve learned a lot about asteroids by looking at pieces that fall to earth. Many asteroids reach earth’s atmosphere where they heat up and burn. We can see them streak across the night sky. They are called meteors. If a meteor reaches the earth’s surface it’s called a meteorite. Many, many meteoroids come into the earth’s atmosphere every day. Most of them burn up as meteors and never reach the earth. Very few become meteorites. A famous meteorite crater in the United States is the Barringer Crater in Arizona. Scientists believe that a 150-foot wide meteorite hit the earth there about 50,000 years ago. It left a 3,600-foot wide crater that is 600 feet deep! 65 million years ago, a colossal meteorite — 6 miles wide, hit the earth. It left a crater 110 miles wide on the Yucatan Peninsula in Mexico. Scientists believe that meteorites changed the Earth’s climate and began the extinction of the dinosaurs. Some asteroids are considered to be near-earth asteroids (NEAs). This means the asteroid’s orbit will bring it closer than 121 million miles of our sun. This may not seem too close to people, but in space, that’s right nearby. It also means it could someday hit the Earth. So far we know of about 250 NEAs. It is thought that for an NEA to hit Earth and do major damage, it would have to be more than a half mile wide. NASA astronomers are watching for NEAs that might hit Earth in the next 100 years. They have invented a computerized watching system called the Sentry System to watch space for dangerous asteroids heading our way. If the computer finds one that may come near Earth, it lists it on a risk page so scientists can study it and see how close it will come. Though this may sound scary, the truth is the chances of any asteroid hitting the Earth are very small. From what we now know, it looks like there have only been three really big meteorite impacts on Earth in the last 65 million years! But it is still good to watch for them — just in case. 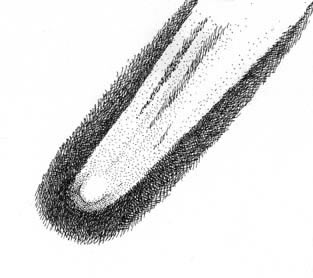 ©2005-2022 Sheri Amsel. All rights reserved.
The material on this site may not be reproduced, distributed, transmitted, cached or otherwise used for anything other than free educational use. It is not to be used for sale or profit of any kind. If you are unsure whether your use of site materials violates the exploringnature.org copyright, contact Sheri Amsel for prior written permission at sheri@exploringnature.org. Thank you for respecting copyright laws.
Site Developed by Eli Madden
Page ID: 1651
IP: 3.236.107.249