With the current worldwide human population at more than 6 billion and expected to reach 10 billion within 20 years, many agricultural experts think the only way to increase food production is to use biotechnology. For example, genes for insect, virus, or herbicide resistance found in one crop can be moved into another.
Genome science used on agriculture may have an important effect on crops and food production and could help ease world hunger. Knowledge of the genome has already helped scientists create better ways to protect food crops from pests.

Bt treatments have long been considered “organic” because Bt is a toxin made from bacteria that attacks the digestive tract of the insect, killing it specifically. It does not move through the food chain like DDT, building up in predators to lethal levels. But Bt spray still has to be sprayed on crops so there is still some potential that the wind can carry the Bt to other places, killing unintended and beneficial insects.
The solution may be genetic engineering. The Bt gene can be put into the crop plant’s genome. This would make the plant deadly only to the insect pest that feeds on it. It would not affect any other animal that eats it, as it is specific to the intestinal tract of those target insects.

The benefits could include saving the farmer money by not having to buy pesticides and increasing their crop production. It could also protect the environment against pesticide run off into drinking water and wildlife habitats.

Several foods we eat in the U.S. have already been genetically engineered to increase yields and fight pest and fungal invasion. Despite the potential for good, biotechnology can also be controversial. The most controversial aspect of biotechnology is bioengineered foods, which has become a major issue in Europe, where such foods are often called “Frankenfoods.” 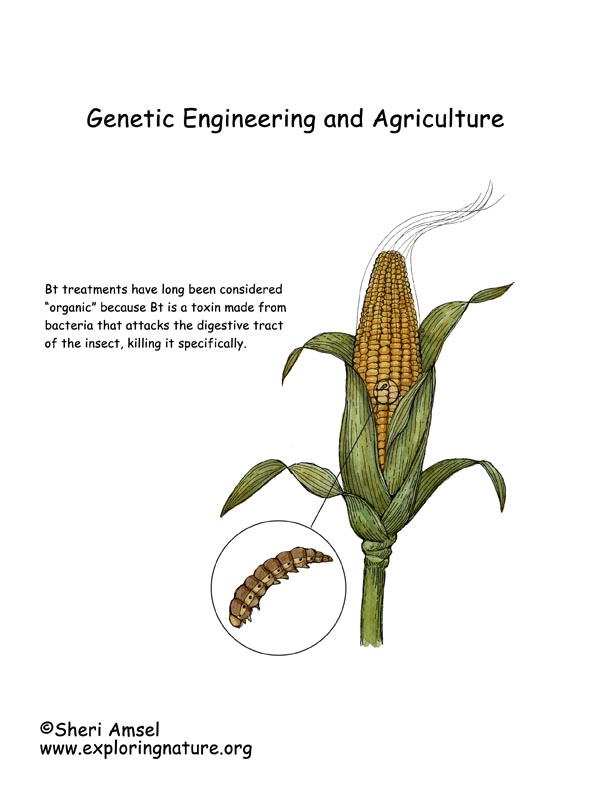 ©2005-2022 Sheri Amsel. All rights reserved.
The material on this site may not be reproduced, distributed, transmitted, cached or otherwise used for anything other than free educational use. It is not to be used for sale or profit of any kind. If you are unsure whether your use of site materials violates the exploringnature.org copyright, contact Sheri Amsel for prior written permission at sheri@exploringnature.org. Thank you for respecting copyright laws.
Site Developed by Eli Madden
Page ID: 1539
IP: 3.238.98.39