Genetic engineering, also called biotechnology, is when scientists use something called recombinant DNA technology to make organisms that produce products people want or need. DNA technology is being used in basic research, medicine, forensics, and agriculture.

The first commercially successful use of genetic engineering was the cloning of human insulin. As shown in the illustration below, insulin was cloned by bacteria (See how this technique works in “Cloning DNA.”). The bacteria made a large amount of insulin that is identical to insulin made by humans.

In human medicine, biotechnology has been used to develop new medicines, make antibodies, and new vaccines. 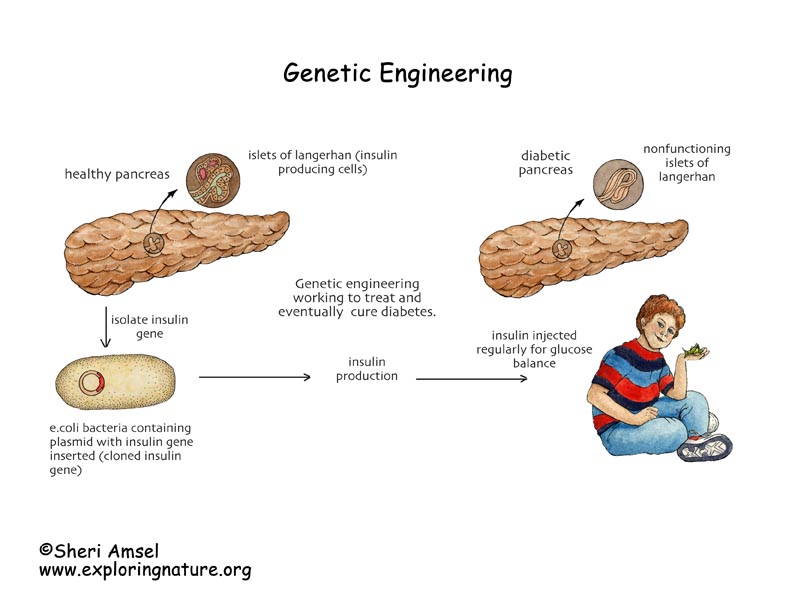 ©2005-2022 Sheri Amsel. All rights reserved.
The material on this site may not be reproduced, distributed, transmitted, cached or otherwise used for anything other than free educational use. It is not to be used for sale or profit of any kind. If you are unsure whether your use of site materials violates the exploringnature.org copyright, contact Sheri Amsel for prior written permission at sheri@exploringnature.org. Thank you for respecting copyright laws.
Site Developed by Eli Madden
Page ID: 1538
IP: 3.238.98.39