Watson and Cricks Great Discovery - The Structure of DNA

In 1953 James Watson and Francis Crick built the first correct structural model of DNA.  They used scale models of atoms to work out their theories about how the structure was set up. When they discovered how the base pairs Adenine fit together with Thymine and Guanine fit together with Cytosine, they knew they had found a solution to DNA’s structural puzzle.

Each nitrogenous base pair was held together by a weak hydrogen bond and stacked flat on top of each other like steps. To each base pair, a two sugar-one phosphate complex attached. This formed the so-called nucleic acid. But what made the structure come together in perfect harmony was how the two strands of DNA, that made the double helix, were discovered to wind in opposite directions. This set up of matching base pairs makes DNA well suited for replication. (See DNA Replication)

The DNA model built by Watson and Crick and the accompanying paper published in Nature, showed how DNA’s base pair structure is suited for the copying of genetic material. In 1962 they, along with Maurice Wilkins, received the Nobel Prize for Physiology for their work.

One April 24, 2003, scientists at the National Human Genome Research Institute (NHGRI) and the US Department of Energy (DOE) announced that they had completed the sequencing of the human genome, 50 years to the day that Nobel Prize winners James Watson and Francis Crick published the molecular structure of the DNA double helix. The decoding of the 3 billion DNA letters of the human genome is the result of one of the most ambitious scientific projects of all time, comparable to going to the moon and splitting the atom. This amazing achievement was accomplished by The International Human Genome Sequencing Consortium and included hundreds of scientists at 20 sequencing centers in the United States, Great Britain, China, France, Germany, Japan and China. These scientists recognized that the sequence of the human genome belonged to every human being and placed all of the sequence generated by the Human Genome Project into public databases freely available to scientists around the world with no restrictions on its use. 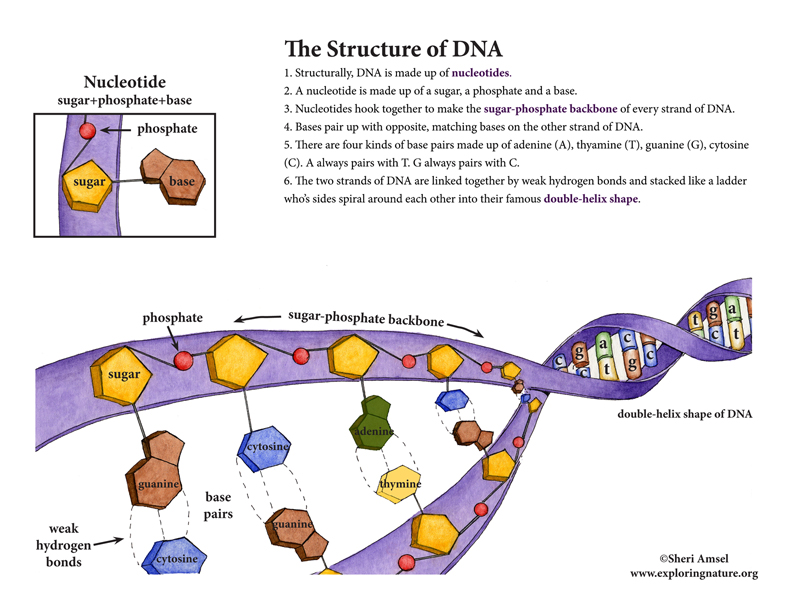 ©2005-2022 Sheri Amsel. All rights reserved.
The material on this site may not be reproduced, distributed, transmitted, cached or otherwise used for anything other than free educational use. It is not to be used for sale or profit of any kind. If you are unsure whether your use of site materials violates the exploringnature.org copyright, contact Sheri Amsel for prior written permission at sheri@exploringnature.org. Thank you for respecting copyright laws.
Site Developed by Eli Madden
Page ID: 1537
IP: 3.238.98.39